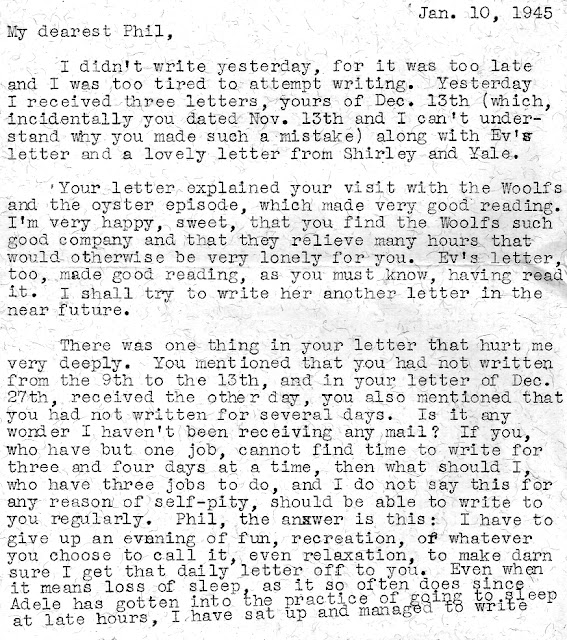 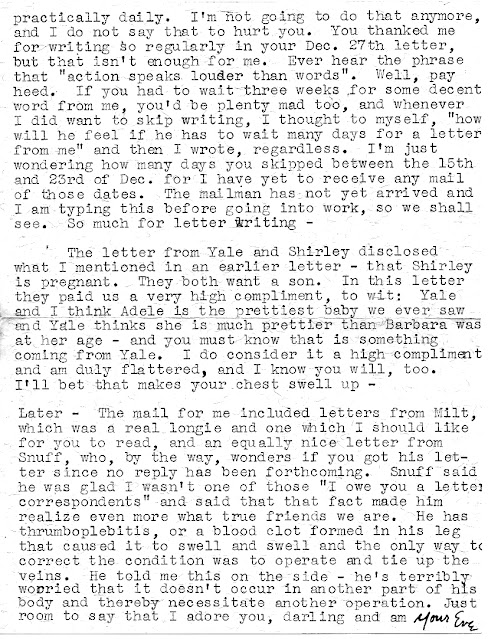 France
9 Jan. 1945
Hello Folks:
Eve dear, I received your letter of the 20th and I was very happy to hear from you. You don’t write very often, but when you do, you write a very interesting letter, full of news of people I am interested in hearing about. I just want you to know that your letters are very much appreciated by me.
During Hanuka, I attended an affair given by the Jewish people of this city. It was really swell. There was plenty to eat, and drink. They had sandwiches, cake, strudel, champagne, etc. A grand time was had by all.
Everything is about the same. I’m still M.P.ing, feeling swell, and very happy. I hope that this year sees the end of the War, and the safe return of all.
Keep well, and keep writing.
Love,
Eddie
Jan. 10, 1945

I didn't write yesterday, for it was too late and I was too tired to attempt writing. Yesterday I received three letters, yours of Dec. 13th (which, incidentally you dated Nov. 13th and I can't understand why you made such a mistake) along with Ev’s letter and a lovely letter from Shirley and Yale.

Your letter explained your visit with the Woolfs and the oyster episode, which made very good reading. I'm very happy, Sweet, that you find the Woolf's such good company and that they relieve many hours that would otherwise be very lonely for you. Ev’s letter, too, made good reading, as you must know, having read it. I shall try to write her another letter in the near future.

There was one thing in your letter that hurt me very deeply. You mentioned that you had not written from the 9th to the 13th, and in your letter of Dec. 27th, received the other day, you also mentioned that you had not written for several days. Is it any wonder I haven't been receiving any mail? If you, who have but one job, cannot find time to write for three and four days at a time, then what should I, who have three jobs to do, and I do not say this for any reason of self-pity, should be able to write to you regularly. Phil, the answer is this; I have to give up an evening of fun, recreation, or whatever you choose to call it, even relaxation, to make darn sure I get that daily letter off to you. Even when it means loss of sleep, as it so often does since Adele has gotten into the practice of going to sleep at late hours, I have sat up and managed to write practically daily. I'm not going to do that anymore, and I do not say that to hurt you. You thanked me for writing šo regularly in your Dec. 27th letter, but that isn't enough for me. Ever hear the phrase that "action speaks louder than words". Well, pay heed. If you had to wait three weeks for some decent word from me, you'd be plenty mad too, and whenever I did want to skip writing, I thought to myself, "how will he feel if he has to wait many days for a letter from me" and then I wrote, regardless. I'm just wondering how many days you skipped between the 15th and 23rd of Dec. for I have yet to receive any mail of those dates. The mailman has not yet arrived and I am typing this before going into work, so we shall see. So much for letter writing -

The letter from Yale and Shirley disclosed what I mentioned in an earlier letter - that Shirley is pregnant. They both want a son. In this letter they paid us a very high compliment, to wit: Yale and I think Adele is the prettiest baby we ever saw and Yale thinks she is much prettier than Barbara was at her age - and you must know that is something coming from Yale. I do consider it a high compliment and am duly flattered, and I know you will, too. I'll bet that makes your chest swell up -

Later - The mail for me included letters from Milt, which was a real longie and one which I should like for you to read, and an equally nice letter from Snuff, who, by the way, wonders if you got his letter since no reply has been forthcoming. Snuff said he was glad I wasn't one of those "I owe you a letter correspondents" and said that that fact made him realize even more what true friends we are. He has thrumboplebitis, or a blood clot formed in his leg that caused it to swell and swell and the only way to correct the condition was to operate and tie up the veins. He told me this on the side - he's terribly worried that it doesn't occur in another part of his body and thereby necessitate another operation. Just room to say that I adore you, darling and am
Your Eve
Posted by Marilyn at 11:55 AM