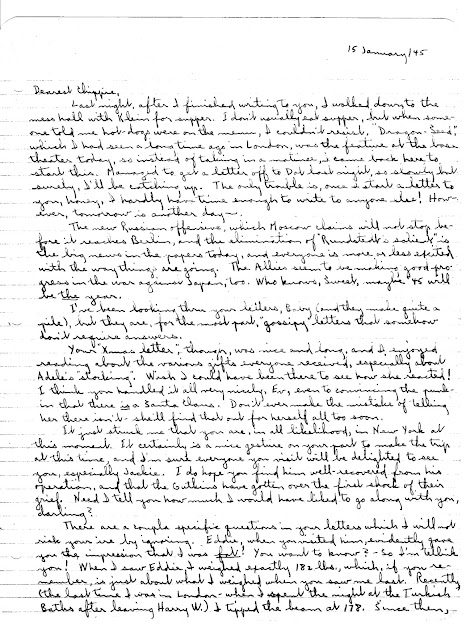 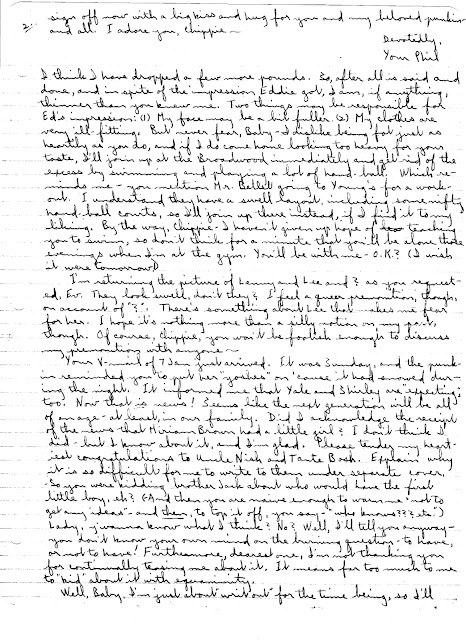 Dearest Chippie,
Last night, after I finished writing to you, I walked down to the mess hall with Klein for supper. I don't usually eat supper, but when someone told me hot-dogs were on the menu, I couldn’t resist. "Dragon-Seed’ which I had seen a long time ago in London, was the feature at the base theater today, so instead of taking in a matinee, I came back here to start this. Managed to get a letter off to Dot last night, so slowly but surely, I’ll be catching up. The only trouble is, once I start a letter to you, honey, I hardly have time enough to write to anyone else! However, tomorrow is another day…

The new Russian offensive, which Moscow claims will not stop before it reaches Berlin, and the elimination of "Rundstedt’s salient" is big news in the papers today, and everyone is more or less excited with the way things are going. The Allies seem to be making good progress against Japan, too. Who knows, Sweet, maybe ’45 will be the year.

I've been looking thru your letters, Baby (and they make quite a pile), but they are, for the most part, "gossipy’ letters that somehow don’t require answers, .

Your "X-mas letter,” though, was nice and long, and I enjoyed reading about the various gifts everyone received, especially about Adele's “stocking". Wish I could have been there to see how she reacted! I think you handled it all very nicely, Ev, even to convincing the punkin that there is a Santa Claus. Don't ever make the mistake of telling her there isn't - she’ll find that out for herself all too soon.

It just struck me that you are, in all likelihood, in New York at this moment. It certainly is a nice gesture on your part to make the trip at this time, and I'm sure everyone you visit will be delighted to see you, especially Jackie. I do hope you find him well-recovered from his operation, and that the Gutkins have gotten over the first shock of their grief. Need I tell you how much I would have liked to go along with you, darling?
There are a coupla specific questions in your letters which I will not risk your ire by ignoring. Eddie, when you visited him, evidently gave you the impression that I was fat! You want to know? - so I'm telling you! When I saw Eddie, I weighed exactly 182 lbs., which, if you remember, is just about what I weighed when you saw me last. Recently (the last time of was in London - when I spent the night at the Turkish Baths after leaving Harry W.) I tipped the beam at 148. Since then, I think I have dropped a few more pounds. So, after all is said and done, and in spite of the impression Eddie got, I am, if anything, thinner than you knew me. Two things may be responsible for Ed’s impression: (1) My face may be a bit fuller. (2) My clothes are very ill-fitting. But never fear, Baby - I dislike being fat just as heartily as you do, and if I do.come home looking too heavy for your taste, I’ll join up at the Broadwood immediately and get rid of the excess by swimming and playing a lot of hand-ball. Which reminds me - you mention Mr. Bellet going to Young's for a work-out. I understand they have a swell layout, including some nifty handball courts, so I’ll join up there instead if I find it to my liking. By the way, Chippie - I haven't given up hope of teaching you to swiM, so don't think for a minute that you'll be alone those evenings when I’m at the gym. You'll be with me - O.K.? (I wish it were tomorrow!)
I'm returning the picture of Lenny and Lee and ? as you requested, Ev. They look swell, don’t they? I feel a queer premonition, though, on account of "?". There's something about Lee that makes me fear for her. I hope it's nothing more than a silly notion on my part, though. Of course, Chippie, you won't be foolish enough to
discuss my premonition with anyone—

Your V-mail of 7 Jan. just arrived. It was Sunday, and the punkin reminded you to put her “yoshes" on 'cause it had snowed during the night. It informed me that Yale and Shirley are “expecting” too! Now that is news! Seems like the next generation will be all of an age - at least, in our family. Did I acknowledge the receipt of the news that Miriam Brown had a little girl? I don't think I did - but I know about it, and I'm glad. Please tender my heartiest congratulations to Uncle Nish and Tante Bosh. Explain why it is so difficult for me to write to them under separate cover,

So you were kidding brother Jack about who would have the first little boy, eh? (And then you are naive enough to warn me not to “get any ideas"- and then, to top it off, you say " who knows??? etc.) Lady, y’wanna know what I think? No? Well, I'll tell you anyway - you don't know your own mind on the burning question - to have or not to have! Furthermore, dearest one, I'm not thanking you for continually teasing me about it. It means far too much to me to “kid" about it with equanimity.
Well, Baby, I'm just about “writ out” for the time being, so I’ll sign off now with a big kiss and hug for you and my beloved punkin and all. I adore you, Chippie—
Devotedly,Your Phil
Posted by Marilyn at 5:20 AM