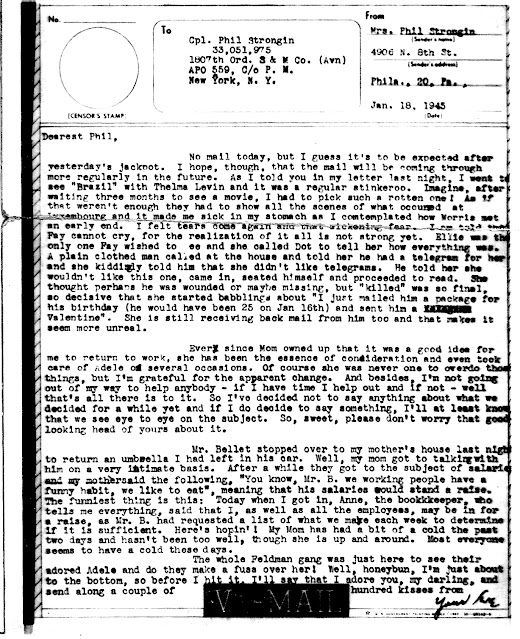 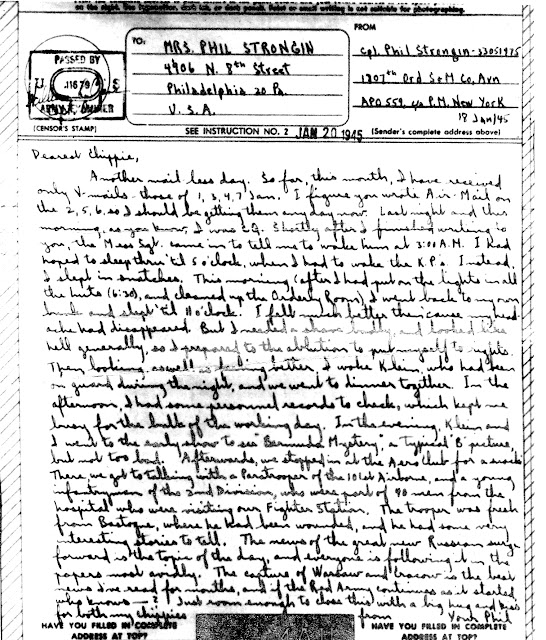 No mail today, but I guess it's to be expected after yesterday's jackpot. I hope, though, that the mail will be coming through more regularly in the future. As I told you in my letter last night, I went to see "Brazil" with Thelma Levin and it was a regular stinkeroo. Imagine, after waiting three months to go to a movie, I had to pick such a rotten one! As if that weren't enough they had to show all the scenes of what occurred at Luxembourg and it made me sick in my stomach as I contemplated how Morris met an early end. I felt tears come again and that sickening fear. I am told that Fay cannot cry, for the realization of it all is not strong yet. Ellie was the only one Fay wished to see and she called Dot to tell her how everything was! A plain clothed man called at the house and told her he had telegram for her and she kiddingly told him that she didn't like telegrams. He told her she wouldn't like this one, came in, seated himself and proceeded to read. She thought perhaps he was wounded or maybe missing, but "killed" was so final, so decisive that she started babbling about "I just mailed him a package for his birthday (he would have been 25 on Jan 16th) and sent him a Valentine". She is still receiving back mail from him too and that makes it seem more unreal.

Ever since Mom owned up that it was a good idea for me to return to work, she has been the essence of consideration and even took care of Adele on several occasions. Of course she was never one to overdo those things, but I'm grateful for the apparent change. And besides, I'm not going out of my way to help anybody - If I have time I help out and if not - well that's all there is to it. So I've decided not to say anything about what we decided for a while yet and if I do decide to say something, I’ll at least know that we see eye to eye on the subject. So, sweet, please don't worry that good looking head of yours about it.

Mr. Bellet stopped over to my mother’s house last night to return an umbrella I had left in his car. Well, my mom got to talking with him on a very intimate basis. After a while they got to the subject of salaries and my mother said the following: "You know, Mr. B. we working people have funny habit, we like to eat” meaning that his salaries could stand a raise. The funniest thing is this: Today when I got in, Anne, the bookkeeper, who tells me everything, said that I, as well as all the employees, may be in for a raise, as Mr. B. had requested a list of what we make each week to determine if it is sufficient. Here's hopin' ! My Mom has had a bit of a cold the past two days and hasn't been too well, though she is up and around. Most everyone seems to have a cold these days.

The whole Feldman gang was just here to see their adored Adele. And do they make a fuss over her! Well, honeybun, I'm just about to the bottom, so before I hit it, I’ll say that I adore you, my darling, and send along a couple of hundred kisses from
Your Eve
18 Jan. 1945

Dearest Chippie,
Another mail-less day. So far this month, I have received only V-mails, those of 1, 3, 4, 7, Jan. I figure you wrote Air-Mail on the 2, 5, 6, so I should be getting them any day now. Last night and this morning, as you know, I was C.Q. Shortly after I finished writing to you, the Mess Sgt. came in to tell me to wake him at 3:00 A.M. I had hoped to sleep thru ’til 5 o’clock, when I had to wake the K.P. Instead, I slept in snatches. This morning (after I had put on the light in all the huts (6:30), and cleaned up the Orderly Room) I went back to my bunk and slept until 11 o’clock. I felt much better then ’cause my headache had disappeared. But I needed a shave badly, and looked like hell generally, so I prepared to the ablution to put myself to rights. Then, looking as well as feeling better, I woke Klein, who had been on guard during the night, and we went to dinner together. In the afternoon, I had some personnel records to check, which kept me busy for the bulk of the working day. In the evening, Klein and I went to the early show to see “Bermuda Mystery,” a typical “B” picture, but not too bad. Afterwards, we stopped in at the Aero Club for snack. There we got to talking with a paratrooper of the 101st Airborne, and a young infantryman of the 2nd Division, who were part of 90 men from the hospital who were visiting our Fighter Station. The trooper was fresh from Bastogne, where he had been wounded, and he had some very interesting stories to tell. The news of the great new Russian surge forward is the topic of the day, and everyone is following it in the papers most avidly. The capture of Warsaw and Cracow is the best news I’ve read for months, and if the Red Army continues as it started, who knows—? Just room enough to close this with a bit hug and kiss for both my Chippies. From
Your Phil
Posted by Marilyn at 3:55 AM