Post #555 - January 19, 1945 You Certainly can be a Cutie When You Want to! and Just Put it Down to My Unaccountable Flair for Liking the Things that No One Else Even Cares About 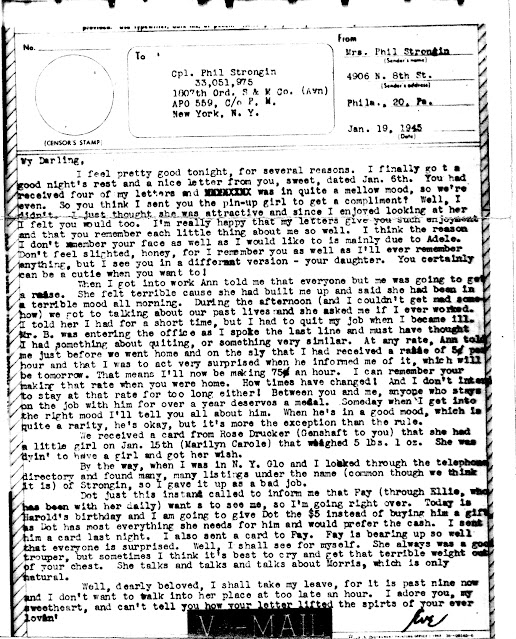 I feel pretty good tonight, for several reasons. I finally got a good night's rest and a nice letter from you, Sweet, dated Jan. 6th. You had received four of my letters and was in quite a mellow mood, so we're even. So you think I sent you the pin-up girl to get a compliment. Well, I didn’t. I just thought she was attractive and since I enjoyed looking at her I felt you would too. I'm really happy that my letters give you such enjoyment and that you remember each little thing about me so well. I think the reason I don't member your face as well as I would like to is mainly due to Adele. Don't feel slighted, honey, for I remember you as well as I'll ever remember anything, but I see you in a different version - your daughter. You certainly can be a cutie when you want to!

When I got into work Ann told me that everyone but me was going to get a raise. She felt terrible cause she had built me up and said she had been in a terrible mood all morning. During the afternoon (and I couldn't get mad somehow) we got to talking about our past lives and she asked me if I ever worked. I told her I had for a short time, but I had to quit my job when I became ill. Mr. B. was entering the office as I spoke the last line and must have thought I had something about quitting, or something very similar. At any rate, Ann told me just before we went home and on the sly that I had received a raise of 5¢ an hour and that I was to act very surprised when he informed me of it, whlch will be tomorrow. That means I'll now be making 75¢ an hour. I can remember your making that rate when you were home, How times have changed! And I don't intend to stay at that rate for too long either! Between you and me, anyone who stays on the job with him for over a year deserves a medal. Someday when I get into the right mood I'll tell you all about him. When he's in a good mood, which to quite a rarity, he's okay, but it's more the exception than the rule,

We received a card from Rose Drucker (Genshaft to you) that she had a little girl on Jan. 15th (Marilyn Carole) that weighed 5 lbs. 1 oz. She was dyin' to have a girl and got her wish.

By the way, when I was in N,Y. Glo and I looked through the telephone directory and found many, many listings under the name (common though we think It is) of Strongin, so I gave it up as a bad job.

Dot just this instant called to inform me that Fay (through Ellie, who has been with her daily) wants to see me, so I'm going right over. Today is Harold's birthday and I am going to give Dot the $5 instead of buying him a gift. Dot has most everything she needs for him and would prefer the cash. I sent him a card last night. I also sent a card to Fay. Fay is bearing up so well that everyone is surprised. Well, I shall see for myself. She always was a trouper, but sometimes I think it's best to cry and get that terrible weight off of your chest. She talks and talks and talks about Morris, which is only natural.

Well, dearly beloved, I shall take my leave, for it is past nine now and I don't want to walk into her place at too late an hour. I adore you, my sweetheart, and can't tell you how your letter lifted the spirits of your ever lovin’
Eve
19 Jan. 1945

Just received your V-mail of 8 Jan, together with a letter from Mike, dated 8 Dec. Mike's letter was very nice, and he talks like he’ll be coming overseas shortly. Did you know that Frances is expecting, and that his second child is due to make its appearance in May? As nice as his letter was, though, yours was infinitely more welcome, darling. Nothing much happened to yours most lovingly today, except that I went to see "Greenwich Village” again this evening (mainly to watch Sally De Marco dance). Very few things I have ever seen in the movies ever gave me more enjoyment then seeing her perform. She is, to my way of thinking, just about the most graceful female I ever watched dance. If l sound overly enthusiastic, honey, at something that hardly anyone else noticed, just put it down to my unaccountable flair for liking the things that no one else even cares about.

I thought I made it plain that I didn’t have to do K.P. on Xmas day, and that the only detail I pull is CQ, but you insist on harping about that "Sgt. stripe" (little knowing that many Sgts. on this base also pull K.P., Guard, and what-not.) Please, Chippie - no more needling about it - there isn't a thing that I can do about it, in spite of your rather hazy notions about the way promotions are made in the Army. About “referring to Sgt. Murphy in another connection” - the time is not yet.
I’m going to hold on to your present yet awhile ’cause I want to take it into town to get a jeweler to engrave it. Just have patience, honey. In the meantime, remember that I am your adoring