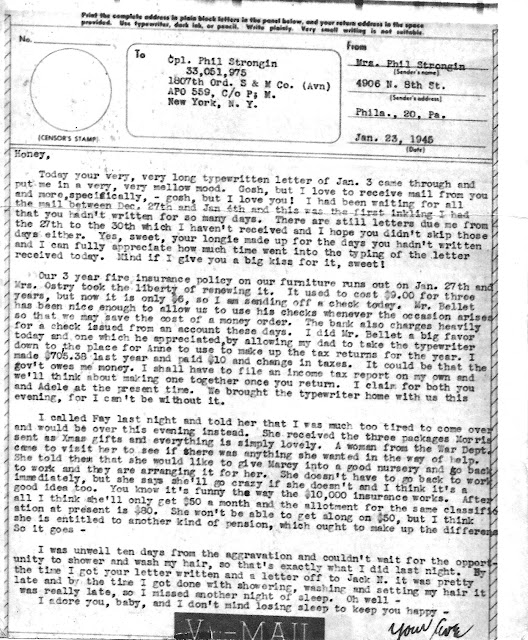 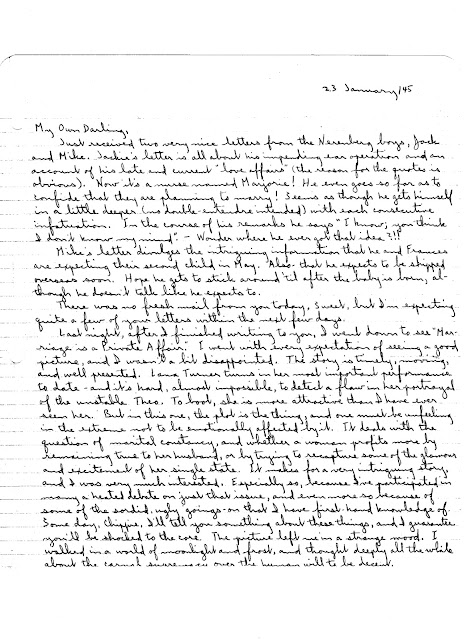 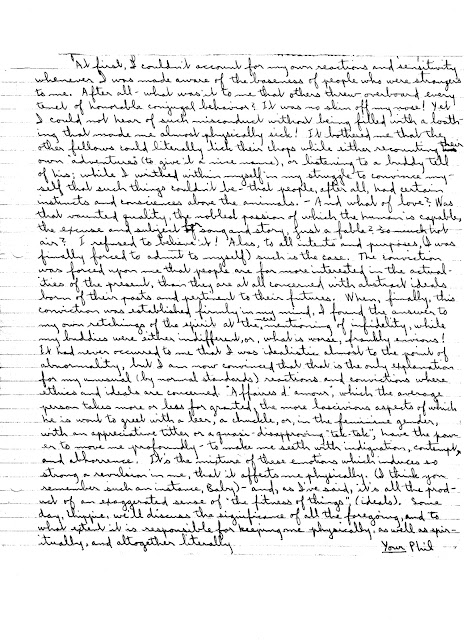 Today your very, very long typewritten letter of Jan. 3 came through and put me in a very, very mellow mood. Gosh, but I love to receive mail from you and more, specifically, - Gosh, but I love you! I had been waiting for all the mail between Dec. 27th and Jan. 4th and this was the first inkling I had that you hadn't written for so many days. There are still letters due me from the 27th to the 30th which I haven't received and I hope you didn't skip those days either. Yes, sweet, your longie made up for the days you hadn't written and I can fully appreciate how much time went into the typing of the letter received today. Mind If I give you a blg kiss for it, sweet!

Our 3 year fire Insurance policy on our furniture runs out on Jan. 27th and Mrs. Ostry took the liberty of renewing it. It used to cost $9.00 for three years, but now It is only $6, so I am sending off check today. Mr. Bellet has been nice enough to allow us to use his checks whenever the occasion arises so that we may save the cost of a money order. The bank also charges heavily for a check issued from an account these days. I did Mr. Beilet a big favor today and one which he appreciated, by allowing my dad to take the typewriter down to the place for Anne to use to make up the tax returns for the year. I made $705.38 last year and paid $10 and change in taxes. It could be that the gov't owes me money. I shall have to file an Income tax report on my own and we'll think about making one together once you return. I claim for both you and Adele at the present time. He brought the typewriter home with us this evening, for I can't be without it.

I called Fay last night and told her that I was much too tired to come over and would be over this evening instead. She received the three packages Morris sent as Xmas gifts and everything is simply lovely. A woman from the War Dept. came to visit her to see if there was anything she wanted in the way of help. V She told them that she would like to give Marcy into a good nursery and go back to work and they are arranging it for her. She doesn't have to go back to work Immediately, but she says she'll go crazy if she doesn't and I think It's good idea too. You know it's funny the way the $10,000 Insurance works. After all I think she'll only get $50 a month and the allotment for the same classification at present is $80. She won't be able to get along on $50, but I think she is entitled to another kind of pension, which ought to make up the difference. So it goes -

I was unwell ten days from the aggravation and couldn't wait for the opportunity to shower and wash my hair, so that's exactly what I did last night. By the time I got your letter written and letter off to Jack N. it was pretty late and by the time I got done with showering, washing and setting my hair it was really late, so I missed another night of sleep. Oh well -

I adore you, baby, and I don't mind losing sleep to keep you happy -

Just received two very nice letters from the Nerenberg boys, Jack and Mike. Jackie's letter is all about his impending ear operation and an account of his late and current "love affairs" (the reason for the quotes is obvious). Now it's a nurse named Marjorie! He even goes so far as to confide that they are planning to marry! Seems as though he gets himself in a little deeper (no double-entendre intended) with each consecutive infatuation. In the course of his remarks he says "I know; you think I don't know my mind" - Wonder where he ever got that idea?!!!
Mike's letter divulges the intriguing information that he and Frances are expecting their second child in May. Also that he expects to be shipped overseas soon. Hope he gets to stick around ’til after the baby is born, although he doesn't talk like he expects to.

There was no fresh mail from you today, Sweet, but I'm expecting quite a few of your letters within the next few days.

Last night, after I finished writing to you, I went down to see "Marriage is a Private Affair.” I went with every expectation of seeing a good picture, and I wasn't a bit disappointed. The story is timely, moving, and well-presented. Lana Turner turns in her most important performance to date and it's hard, almost impossible, to detect a flaw in her portrayal of the unstable Theo. To boot, she is more attractive than I have ever seen her. But in this one, the plot is the thing, and one must be unfeeling in the extreme not to be emotionally affected by it. It deals with the question of marital constancy, and whether a woman profits more by remaining true to her husband, or by trying to recapture some of the glamour and excitement of her single state. It makes for a very intriguing story and I was very much interested. Especially so because I've participated in many a heated debate on just that issue, and even more so because of a some of the sordid, ugly goings-on that I have first-hand knowledge of. Some day, Chippie, I'll tell you something about these things, and I guarantee you'll be shocked to the core. The picture left me in a strange mood. I walked in a world of moonlight and frost, and thought deeply all the while about the carnal supremacy over the human will to be decent.

At first, I couldn't account for my own reactions and sensitivity whenever I was made aware of the baseness of people who were strangers to me. After all - what was it to me that others threw overboard every tenet of honorable conjugal behavior? It was no skin off my nose! Yet I could not hear of such misconduct without being filled with a loathing that made me almost physically sick! It bothered me that the other fellows could literally lick their chops while either recounting their own “adventures” (to give it a nice name), or listening to a buddy tell of his; while I writhed within myself in my struggle to convince myself that such things couldn't be - that people, after all, had certain instincts and consciences above the animals. - And what of love? Was that vaunted quality, the noblest passion of which the human is capable, the excuse and subject for song and story, just a fable? So much hot air? I refused to believe it! Alas, to all intents and purposes, (I was finally forced to admit to myself) such is the case. The conviction was forced upon me that people are far more interested in the actualities of the present, than they are at all concerned with abstract ideals born of their pasts and pertinent to their futures. When, finally, this conviction was established firmly in my mind, I found the answer to my own retchings of the spirit at the mere mentioning of infidelity, while my buddies were either indifferent, or, what is worse, frankly envious! It had never occurred to me that I was idealistic almost to the point of abnormality, but I am now convinced that that is the only explanation for my unusual (by normal standards) reactions and convictions where ethics and ideals are concerned. "Affaires d'amour, which the average person takes more or less for granted, the more lascivious aspects of which he is wont to greet with a leer, a chuckle, or, in the feminine gender, with an appreciative titter or a quasi-disapproving "tsk-tsk", have the power to move me profoundly - to make me seethe with indignation, contempt and abhorrence. It's the mixture of these emotions which induces so strong a revulsion in me, that it affects me physically. (I think you remember such an instance, Baby) – and, as I've said, it's all the product of an exaggerated sense of the fitness of things", (ideals). Someday, Chippie, we'll discuss the significance of all the foregoing, and to what extent it is responsible for keeping me physically, as well as spiritually, and altogether literally
Your Phil
Posted by Marilyn at 6:23 AM