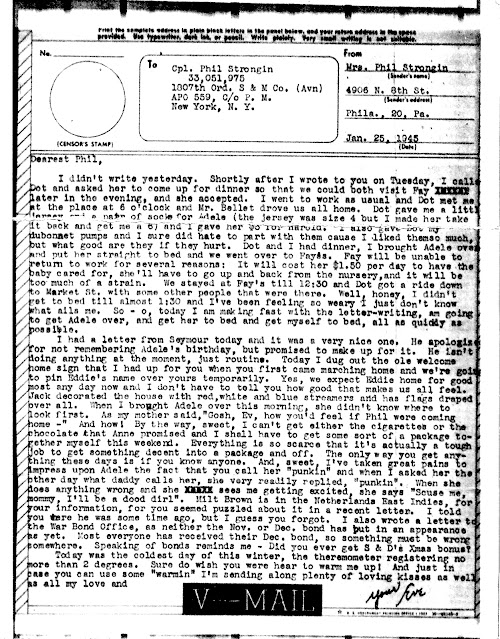 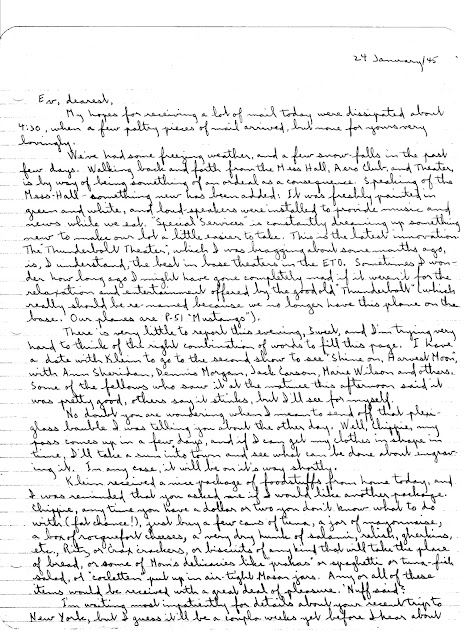 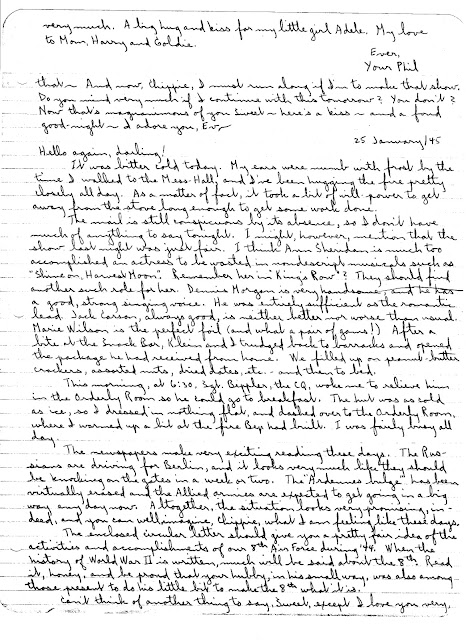 I didn't write yesterday. Shortly after I wrote to you on Tuesday, I called Dot and asked her to come up for dinner so that we could both visit Fay later in the evening, and she accepted. I went to work as usual and Dot met me at the place at 6 o'clock and Mr. Bellet drove us all home. Dot gave me a little jersey and a pair of socks for Adele (the jersey was size 4 but I made her take it back and get me a 6) and I gave her $8 for Harold. I also gave Dot my dubonnet pumps and I sure did hate to part with them cause I liked them so much, but what good are they if they hurt. Dot and I had dinner, I brought Adele over and put her straight to bed and we went over to Fay’s. Fay will be unable to return to work for several reasons: It will cost her $1.50 per day to have the baby cared for, she'll have to go up and back from the nursery, and it will be too much of a strain. We stayed at Fay's till 12:30 and Dot got a ride down to Market St. with some other people that were there. Well, honey, I didn't get to bed till almost 1:30 and I've been feeling so weary I just don't know what ails me. So - o, today I am makIng fast with the letter writing, am going to get Adele over, and get her to bed and get myself to bed, all as quickly as possible.

I had a letter from Seymour today and it was a very nice one. He apologizes for not remembering Adele's birthday, but promised to make up for it. He isn't doing anything at the moment, just routine. Today I dug out the ole welcome home sign that I had up for you when you first came marching home and we're going to pin Eddie's name over yours temporarily. Yes, we expect Eddie home for good most any day now and I don't have to tell you how good that makes us all feel. Jack decorated the house with red, white and blue streamers and has flags draped over all. When I brought Adele over this morning, she didn't know where to look first. As my mother said, "Gosh, Ev, how you'd feel if Phil were coming home." And how! By the way, sweet, I can't get either the cigarettes or the chocolate that Anne promised and I shall have to get some sort of a package together myself this weekend. Everything is so scarce that it's actually a tough job to get something decent into a package and off. The only way you get anything these days is if you know anyone. And, sweet, I've taken great pains to impress upon Adele the fact that you call her "punkin" and when I asked her the other day what daddy calls her, she very readily replied, "punkin. When she does anything wrong and she sees me getting excited, she says "Scuse me, mommy, I'll be a dood dirl". Milt Brown is in the Netheríands East Indies, for your information, for you seemed puzzled about it in a recent letter. I told you where he was some time ago, but I guess you forgot. I also wrote a letter to the War Bond office, as neither the Nov. or Dec. bond has put in an appearance as yet. Most everyone has received their Dec. bond, so something must be wrong somewhere. Speaking of bonds reminds me - Did you ever get S & D’s Xmas bonus?

Today was the coldest day of this winter, the thermometer registering no more than 2 degrees. Sure do wish you were here to warm me up! And just in case you can use some "warmin’” I'm sending along plenty of loving kisses as well as all my love and

My hopes for receiving a lot of mail today were dissipated about 4:30, when a few paltry pieces of mail arrived, but none for yours very lovingly.

We've had some freezing weather, and a few snow-falls in the past few days. Walking back and forth from the Mess Hall, Aero Club, and Theater is by way of being something of an ordeal as a consequence. Speaking of the Mess-Hall - something new has been added. It was freshly painted in green and white, and loud-speakers were installed to provide music and news while we eat. "Special Services" is constantly dreaming up something new to make our lot a little easier to take. This is the latest innovation. The “Thunderbolt Theater,” which I was bragging about some months ago is, I understand, the best in base theaters in the ETO. Sometimes I wonder how long ago I might have gone completely mad if it weren't for the relaxation and entertainment offered by the good old “Thunderbolt" (which really should be re-named because we no longer have this plane on the base. Our planes are P-51 "Mustangs").

There is very little to report this evening, Sweet, and I'm trying very hard to think of the right combination of words to fill this page. I have a date with Klein to go to the second show to see "Shine on, Harvest Moon, with Ann Sheridan, Dennis Morgan, Jack Carson, Marie Wilson and others. Some of the fellows who saw it at the matinee this afternoon said it was pretty good, others say it stinks, but I'll see for myself.

No doubt you are wondering when I mean to send off that plexi-glass bauble I was telling you about the other day. Well, Chippie, my pass comes up in a few days, and if I can get my clothes in shape in time, I'll take a run into town and see what can be done about engraving it. In any case, it will be on its way shortly.
Klein received a nice package of foodstuffs from home today, and I was reminded that you asked me if I would like another package. Chippie, any time you have a dollar or two you don't know what to do with (fat chance!), just buy a few cans of tuna, a jar of mayonnaise, a box of rocquefort cheeses, a very dry hunk of salami, relish, gherkins, etc. Ritz or Crax crackers, or biscuits of any kind that will take the place of bread, or some of Mom's delicacies like “prakas" or spaghetti or tuna-fish salad, or “cocletten” put up in air-tight Mason jars. Any or all of these items would be received with a great deal of pleasure. 'Nuff said?

I'm waiting most impatiently for details about your recent trip to New York, but I guess it'll be a coupla weeks yet before I hear about that. And now, Chippie, I must run along if I’m to make that show. Do you mind very much if I continue with this tomorrow? You don't? Now that's magnanimous of you, Sweet - here's a kiss - and a fond good-night - I adore you, Ev—

25 January 1945
Hello again, darling! It was bitter cold today. My ears were numb with frost by the time I walked to the Mess-Hall, and I've been hugging the fire pretty closely all day. As a matter of fact, it took a bit of will power to get away from the stove long enough to get some work done.

The mail is still conspicuous by its absence, so I don't have much of anything to say tonight. I might, however, mention that the show last night was just fair. I think Ann Sheridan is much too accomplished an actress to be wasted in nondescript musicals such as "Shine on, Harvest Moon". Remember her in “King's Row"? They should find another such role for her. Dennis Morgan is very handsome, and he has a good, strong singing voice. He was entirely sufficient as the romantic lead. Jack Carson, always good, is neither better nor worse than usual. Marie Wilson is the perfect foil (and what a pair of gams!) After a bite at the Snack Bar, Klein and I trudged back to barracks and opened the package he had received from home. We filled up on peanut-butter crackers, assorted nuts, dried dates, etc. - and then to bed.

This morning, at 6:30, Sgt. Beppler, the CQ, woke me to relieve him in the Orderly Room so he could go to breakfast. The hut was as cold as ice, so I dressed in nothing flat, and dashed over to the Orderly Room, where I warmed up a bit at the fire Bep had built. I was fairly busy all day.

The newspapers make very exciting reading these days. The Russians are driving for Berlin, and it looks very much like they should be knocking on the gates in a week or two. The “Ardennes bulge" has been virtually erased and the Allied armies are expected to get going in a big way any day now. Altogether, the situation looks very promising, indeed, and you can well imagine, Chippie, what I am feeling like these days.
The enclosed circular letter should give you a pretty fair idea of the activities and accomplishments of our 8th Air Force during ’44. When the history of World War II is written, much will be said about the 8th. Read it, honey, and be proud that your hubby, in his small way, was also among those present to do his little bit to make the 8th what it is.

Can't think of another thing to say, Sweet, except I love you very, very much. A big hug and kiss for my little girl Adele. My love to Mom, Harry and Goldie.Ever,Your Phil