Post #565 - January 30, 1945 Adele is Not Afraid of the Dark Any Longer and My Heart Goes Out to Fay, and to All Those Young Wives and Mothers Who Lost Their Life’s Most Precious Possession When Their Husbands Fell in Battle 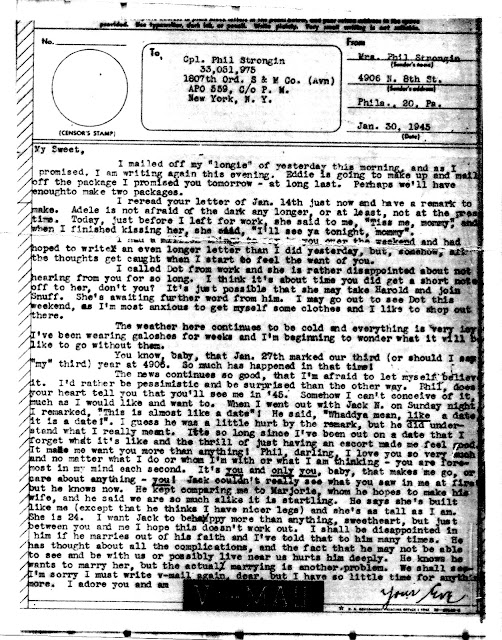 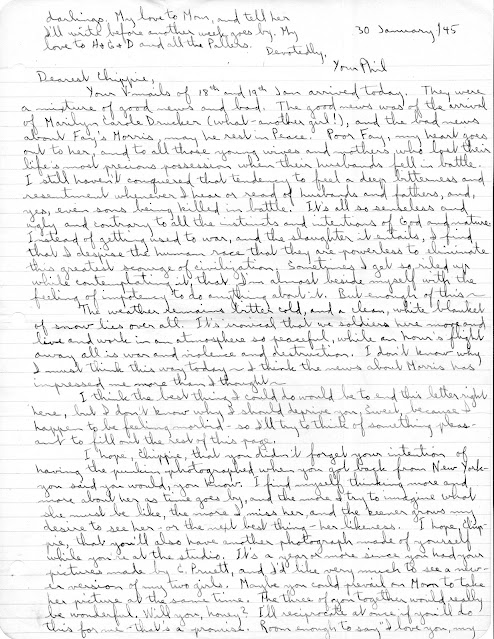 I malled off my "longie" of yesterday this morning, and as I promised, I am writing again this evening. Eddie is going to make up and mail off the package I promised you tomorrow - at long last. Perhaps we'll have enough to make two packages.

I reread your letter of Jan. 14th just now and have a remark to make. Adele is not afraid of the dark any longer, or at least, not at the present time. Today, just before I left for work, she said to me, “Tiss me, mommy;” and when I finished kissing her, she said, "I'll see ya tonight, mommy’.

I had a million things to say to you over the weekend and had hoped to write an even longer letter than I did yesterday, but, somehow, all the thoughts get caught when I start to feel the want of you.

I called Dot from work and she is rather disappointed about not hearing from you for so long. I think it's about time you did get short note off to her, don't you? It's just possible that she may take Harold and join Snuff. She's awaiting further word from him. I may go out to see Dot this weekend, as I'm most anxious to get myself some clothes and I like to shop out there.

The weather here continues to be cold and everything is very icy. I've been wearing galoshes for weeks and I'm beginning to wonder what it will be like to go without them.

The news continues so good, that I'm afraid to let myself believe it. I'd rather be pessimistic and be surprised than the other way. Phil, does your heart tell you that you'll see me in ’45. Somehow I can't conceive of it, much as I would like and want to. When I went out with Jack N. on Sunday night, I remarked, “This is almost like a date!” He said, "Whaddya mean, like a date, it is a date!" I guess he was a little hurt by the remark, but he did understand what I really meant. It’s so long since I've been out on a date that I forget what it's like and the thrill of just having an escort made me feel good. It made me want you more than anything! Phil, darling, I love you so very much and no matter what I do or whom I’m with or what I am thinking, you are foremost in my mind each second. It's you and only you, baby, that makes me go, or care about anything - you! Jack couldn't really see what you saw in me at first, but he knows now. He kept comparing me to Marjorie, whom he hopes to make his wife, and he said we are so much alike it is startling. He says she's built like me (except that he thinks I have nicer legs) and she’s as tall as I am. She is 24. I want Jack to be happy more than anything, sweetheart, but just between you and me I hope this doesn't work out. I shall be disappointed in him if he marries out of his faith and I've told that to him many times. He has thought about all the complications, and the fact that he may not be able to see and be with us or possibly live near us hurts him deeply. He knows he wants to marry her, but the actually marrying is another problem. We shall see—I’m sorry I must write v-mail again, dear, but I have so little time for anything more. I adore you and am
Your Eve
30 January 1945
Dearest Chippie,

Your V-mails of 18th and 19th Jan. arrived today. They were a mixture of good news and bad. The good news was of the arrival of Marilyn Carole Drucker (what-another girl!), and the bad news about Fay's Morris, may he rest in peace. Poor Fay, my heart goes out to her, and to all those young wives and mothers who lost their life's most precious possession when their husbands fell in battle. I still haven't conquered that tendency to feel a deep bitterness and resentment whenever I hear or read of husbands and fathers, and, yes, even sons being killed in battle. It's all so senseless and ugly and contrary to all the instincts and intentions of God and nature. Instead of getting used to war, and the slaughter it entails, I find that I despise the human race that they are powerless to eliminate this greatest scourge of civilization. Sometimes I get so riled up while contemplating it that I'm almost beside myself with the feeling of impotency to do anything about it. But enough of this—

The weather remains bitter cold, and a clean, white blanket of snow lies over all. It's ironical that we soldiers here move and live and work in an atmosphere so peaceful, while an hour's flight away all is war and violence and destruction. I don't know why I must think this way today—I think the news about Morris has impressed me more than I thought—

I think the best thing I could do would be to end this letter right here, but I don’t know why I should deprive you, Sweet, because I happen to be feeling morbid—so I’ll try to think of something pleasant to fill out the rest of this page.

I hope, Chippie, that you didn't forget your intention of having the punkin photographed when you got back from New York. You said you would, you know. I find myself thinking more and more about her as time goes by, and the more I try to imagine what she must be like, the more I miss her, and the keener grows my desire to see her—or the next best thing—her likeness. I hope, Chippie, that you'll also have another photograph made of yourself while you are at the studio. It's a year or more since your had your pictures made by C. Pruett, and I'd like very much to see a newer version of my two girls. Maybe you could prevail on Mom to take her picture at the same time. The three of you together would really be wonderful. Will you, honey? I’ll reciprocate at once if you'll do this for me—that's a promise. Room enough to say “I love you, my darlings. My love to Mom, and tell her I’ll write before another week goes by. My love to H+ G+D and all the Pallers.
Devotedly,Your Phil
Posted by Marilyn at 1:27 PM