Post #568 - February 2, 1945 Gee, I Wish I Could Make You a Decent Breakfast Once Again! and I Haven’t Received a Solitary Piece of “Air-Mail” for Almost a Month 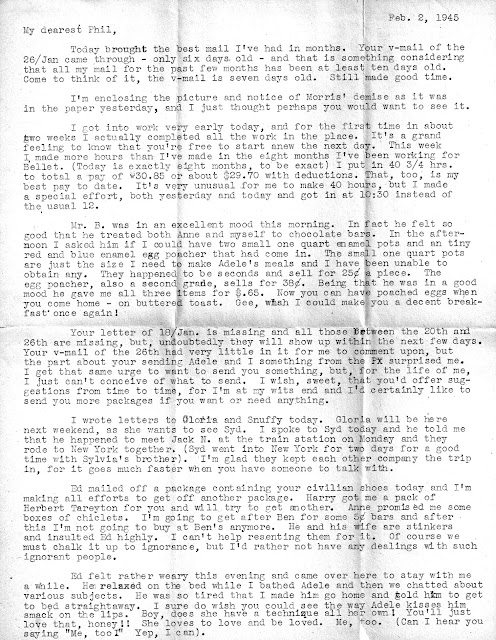 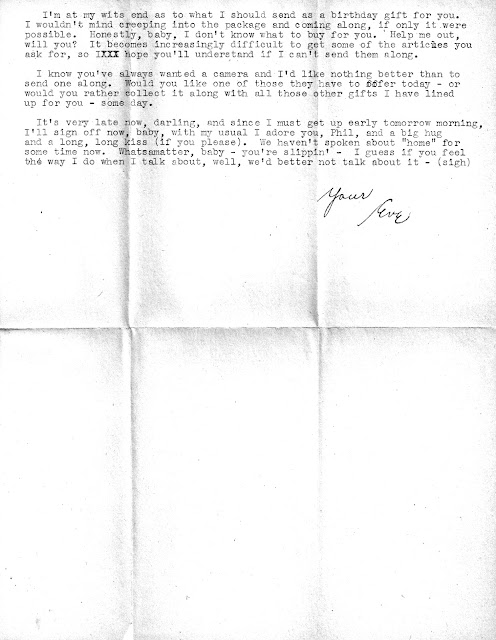 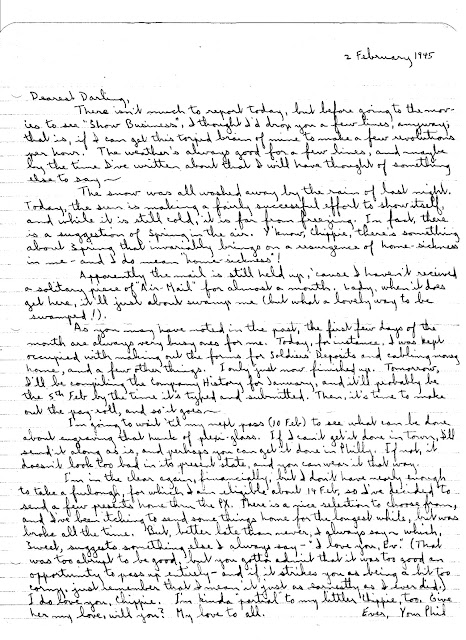 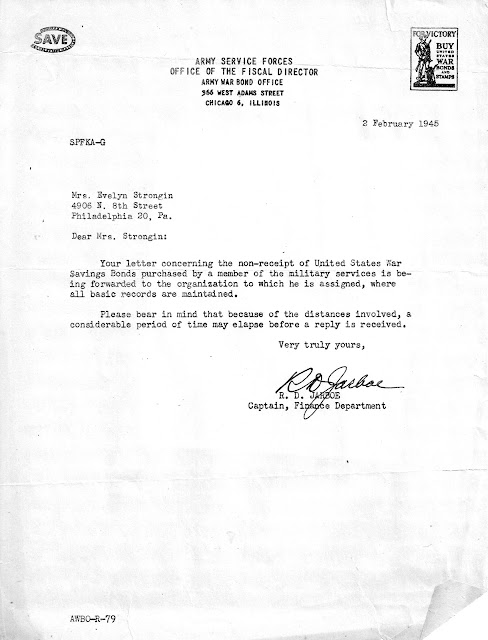 Today brought the best mail I've had in months, Your V-mail of the 26/Jan came through - only six days. old - and that is something considering that all my mail for the past few months has been at least ten days old. Come to think of it, the V-mail is seven days old. Still made good time.

I'm enclosing the picture and notice of Morris’ demise as it was in the paper yesterday, and I just thought perhaps you would want to see it.

I got into work very early today, and for the first time in about two weeks I actually completed all the work in the place. It's a grand feeling to know that you're free to start anew the next day. This week I made more hours than I've made in the eight months I've been working for Bellet. (Today is exactly eight months, to be exact) I put in 40-3/4 hrs. to total a pay of $30.85 or about $29.70 with deductions. That, too, is my best pay to date. It's very unusual for me to make 40 hours, but I made a special effort, both yesterday and today and got in at 10:30 instead of the usual 12.

Mr. B. was in an excellent mood this morning. In fact he felt so good that he treated both Anne and myself to chocolate bars. In the afternoon I asked him if I could have two small one quart enamel pots and a tiny red and blue enamel egg poacher that had come in. The small one quart pots are just the size I need to make Adele's meals and I have been unable to obtain any. They happened to be seconds and sell for 25¢ a piece. The egg poacher, also a second grade, sells for 38¢. Being that he was in a good mood he gave me all three items for $.65. Now you can have poached eggs when you come home - on buttered toast. Gee, I wish I could make you a decent breakfast once again!

Your letter of 18/Jan. is missing and all those between the 20th and 26th are missing, but, undoubtedly they will show up within the next few days. Your V-mail of the 26th had very little in it for me to comment upon, but the part about your sending Adele and I something from the PX surprised me. I get that same urge to want to send you something, but, for the life of me, I just can't conceive of what to send. I wish, sweet, that you'd offer suggestions from time to time, for I'm at my wits end and I'd certainly like to send you more packages if you want or need anything.

I wrote letters to Gloria and Snuffy today. Gloria will be here next weekend, as she wants to see Syd. I spoke to Syd today and he told me that he happened to meet Jack N. at the train station on Monday and they rode to New York together. (Syd went into New York for two days for a good time with Sylvia's brother). I'm glad they kept each other company for the trip in, for it goes much faster when you have someone to talk with.

Ed mailed off a package containing your civilian shoes today and I'm making all efforts to get off another package. Harry got me a pack of Herbert Tareyton for you and will try to get another. Anne promised me some boxes of chiclets. I'm going to get after Ben for some 5¢ bars and after this I'm not going to buy at Ben's anymore. He and his wife are stinkers and insulted Ed highly. I can't help resenting them for it. Of course we must chalk it up to ignorance, but I'd rather not have any dealings with such ignorant people.

Ed felt rather weary this evening and came over here to stay with me awhile. He relaxed on the bed while I bathed Adele and then we chatted about various subjects. He was so tired that I made him go home and told him to get to bed straightaway. I sure do wish you could see the way Adele kisses him smack on the lips. Boy, does she have a technique all her own! You'll just love that, honey!! She loves to love and be loved. Me, too. (Can I hear you saying "Me, too!" Yep, I can).

I’m at my wits end as to what I should send as a birthday gift for you. I wouldn't mind creeping into the package and coming along, if only it were possible. Honestly, baby, I don't know what to buy for you. Help me out, will you? It becomes increasingly difficult to get some of the articles you ask for, so I hope you'll understand if I can't send them along.

I know you've always wanted a camera and I'd like nothing better than to send one along. Would you like one of those they have to offer today - or would you rather collect it along with all those other gifts I have lined up for you - some day.

It's very late now, darling, and since I must get up early tomorrow morning, I'll sign off now, baby, with my usual I adore you, Phil, and a big hug and a long, long kiss (if you please). We haven't spoken about "home" for some time now. Whatsamatter, baby - you're slippin’ - I guess if you feel the way I do when I talk about, well, we'd better not talk about it - (sigh)

There isn't much to report today, but before going to the movies to see "Show Business", I thought I'd drop you a few lines, anyways that is, if I can get this torpid brain of mine to make a few revolutions per hour. The weather's always good for a few lines, and maybe by the time I’ve written about that I will have thought of something else to say—

The snow was all washed away by the rain of last night. Today, the sun is making a fairly successful effort to show itself, and while it is still cold, it is far from freezing. In fact, there is a suggestion of Spring in the air. Y'know, Chippie, there's something  about Spring that invariably brings on a resurgence of home-sickness in me—and I do mean “home-sickness”!.

Apparently the mail is still held up, ’cause I haven't received a solitary piece of "Air-Mail" for almost a month. Lady, when it does get here, it'll just about swamp me (but what a lovely way to be swamped!).

As you may have noted in the past, the first few days of the month are always very busy ones for me. Today, for instance, I was kept occupied with mailing out the forms for Soldiers’ Deposits and cabling money from home, and a few other things. I only just now finished up. Tomorrow, I’ll be compiling the Company History for January, and it'll probably be the 5th Feb by the time it's typed and submitted. Then, it's time to make out the pay-roll, and so it goes—
I'm going to wait ’til my next pass (10 Feb) to see what can be done about engraving that hunk of plexiglass. If I can’t get it done in town, I’ll send it along as is, and perhaps you can get it done in Philly. If not, it doesn’t look too bad in its present state, and you can wear it that way.
I'm in the clear again, financially, but I don't have nearly enough to take a furlough, for which I am eligible about 14 Feb, so I've decided to send a few presents home thru the PX. There is a nice selection to choose from, and I’ve been itching to send some things home for the longest while, but was broke all the time. But, better late than never, I always say—which suggests something else I always say—“I love you, Ev.” (That was too abrupt to be good, but you gotta admit that it was too good an opportunity to pass up entirely—and if it strikes you as being a bit corny, just remember that I mean it just as earnestly as I ever did.)  I do love you, Chippie. I'm kinda “partial” to my little Chippie, too. Give her my love, will you? My love to all.
Ever, Your Phil
Posted by Marilyn at 10:28 AM