Post #569 - February 3, 1945 After Dinner Jack, Ed and I Practiced Some Dancing for Awhile and I Hardly Realized with What Keen Anticipation I was Awaiting Mail-Call 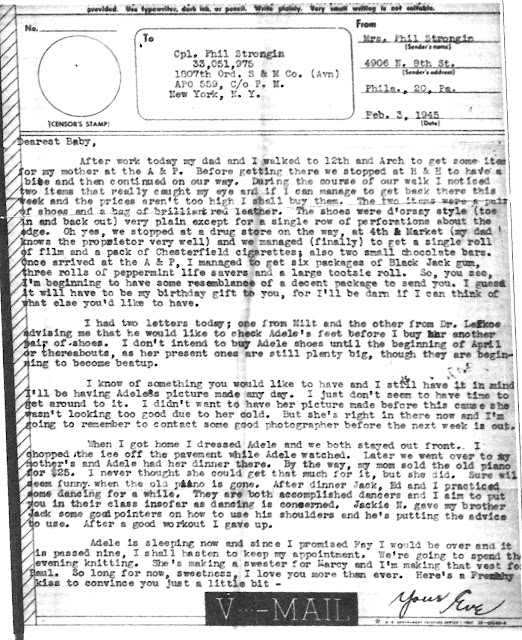 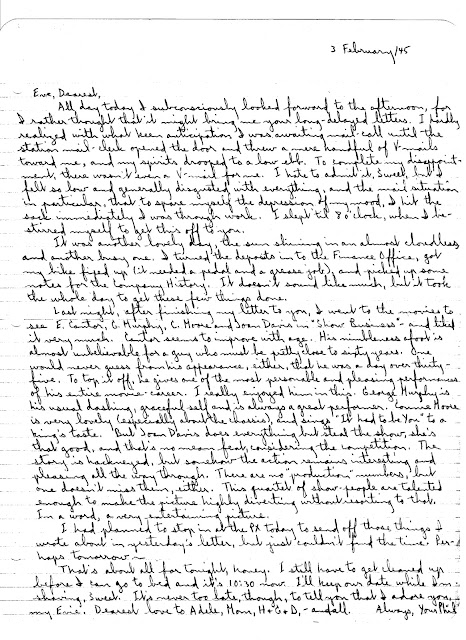 After work today my dad and I walked to 12th and Arch to get some item for my mother at the A & P. Before getting there we stopped at H & H to have a bite and then continued on our way. During the course of our walk I noticed two items that really caught my eye and if I can manage to get back there this week and the prices aren’t too high I shall buy them. The two items were a pair of shoes and a bag of brilliant red leather. The shoes were d'orsay style (toe in and back out) very plain except for a single row of perforations about the edge. Oh yes, we stopped at a drug store on the way, at 4th & Market (my dad knows the proprietor very well) and we managed (finally) to get a single roll of film and a pack of Chesterfield cigarettes, also two small chocolate bars. Once arrived at the A & P, I managed to get six packages of Black Jack gum, three rolls of peppermint life savers and a large tootsie roll. So, you see, I'm beginning to have some resemblance of a decent package to send you. I guess it will have to be my birthday gift to you, for I'll be darn if I can think of what else you'd like to have.

I had two letters today; one from Milt and the other from Dr. Lefkoe advising me that he would like to check Adele’s feet before I buy her another pair of shoes. I don't intend to buy Adele shoes until the beginning of April or thereabouts, as her present ones are still plenty big, though they are beginning to become beatup.

I know of something you would like to have and I still have it in mind. I’ll be having Adele’s picture made any day. I just don't seem to have time to get around to it. I didn't want to have her picture made before this cause she wasn't looking too good due to her cold. But she's right in there now and I'm going to remember to contact some good photographer before the next week is out.

When I got home I dressed Adele and we both stayed out front. I chopped the ice off the pavement while Adele watched. Later we went over to my mother's and Adele had her dinner there. By the way, my mom sold the old piano for $25. I never thought she could get that much for it, but she did. Sure will seem funny when the old piano is gone. After dinner Jack, Ed and I practiced some dancing for awhile. They are both accomplished dancers and I aim to put you in their class insofar as dancing is concerned. Jackie N. gave my brother Jack some some pointers on how to use his shoulders and he's putting the advice to use. After a good workout I gave up.

Adele is sleeping now and since I promised Fay I would be over and it is passed nine, I shall hasten to keep my appointment. We're going to spend the evening knitting. She's making a sweater for Marcy and I'm making that vest for Paul. So long for now, sweetness, I love you more than ever. Here's a Frenchy kiss to convince you just a little bit -
Your Eve

All day today I subconsciously looked forward to the afternoon, for I rather thought that it might bring me your long-delayed letters. I hardly realized with what keen anticipation I was awaiting mail-call until the station mail-clerk opened the door and threw a mere handful of V-mail toward me, and my spirits drooped to a low ebb. To complete my disappointment, there wasn't even a V-mail for me. I hate to admit it, Sweet, but I felt so low and generally disgusted with everything, and the mail situation in particular, that to spare myself the depression of my mood, I hit the sack immediately I was through work. I slept ’til 8 o’clock, when I bestirred myself to get this off to you.

It was another lovely day, the sun shining in an almost cloudless, and another busy one. I turned the deposits into the Finance Office, got my bike fixed up (it needed a pedal and a grease job) and picked up some notes for the Company History. It doesn’t sound like much, but it took the whole day to get these few things done.

Last night, after finishing my letter to you, I went to the movies to see E. Cantor, G. Murphy, C. Moore and Joan Davis in "Show Business" - and liked it very much. Cantor seems to improve with age. His nimbleness afoot is almost unbelievable for a guy who must be pretty close to sixty years. One would never guess from his appearance, either, that he was a day over thirty-five. To top it off, he gives one of the most personable and pleasing performances of his entire movie career. I really enjoyed him in this. George Murphy is his usual dashing, graceful self and is always a great performer. Connie Moore is very lovely (especially about the chassis), and sings "It had to be You" to a king's taste. But Joan Davis does everything but steal the show, she's that good, and that's no mean feat, considering the competition. The story is hackneyed, but somehow the action remains interesting and pleasing all the way through. There are no “production” numbers, but one doesn't miss them, either. This quartet of show-people are talented enough to make the picture highly diverting without resorting to that. In a word, a very entertaining picture.
I had planned to stop in at the PX today to send off those things I wrote about in yesterday's letter, but just couldn't find the time. Perhaps tomorrow—

That’s about all for tonight, honey. I still have to get cleaned up before I can go to bed and it's 10:30 now. I'll keep our date while I'm shaving, Sweet. It’s never too late, though, to tell you that I adore you, my Evie. Dearest love to Adele, Mom, H+G+D, —and all.
Always, your Phil
Posted by Marilyn at 11:35 AM