Post #572 - February 6, 1945 I'm Going to the Shower to be Held at Betty's House this Evening and I Admire Your Motives in Making the Trip to New York 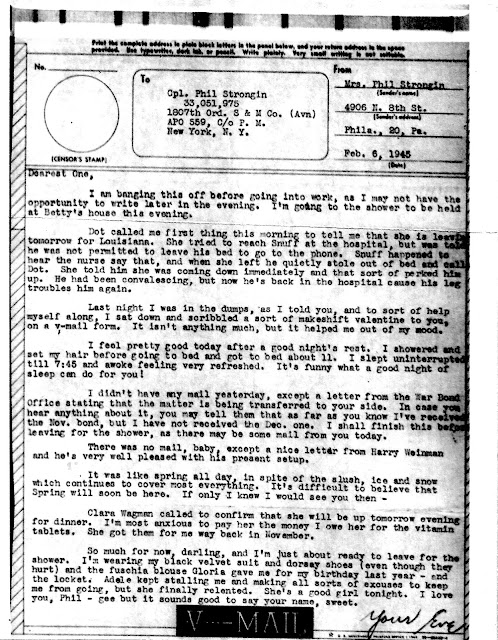 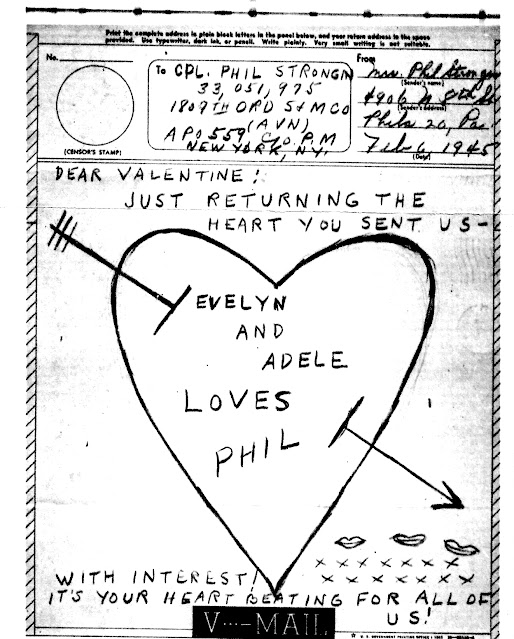 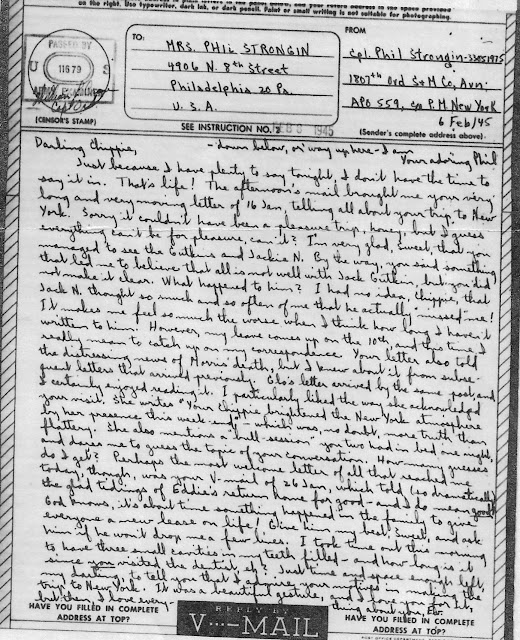 I am banging this out before going into work, as I may not have the opportunity to write later in the evening. I'm going to the shower to be held at Betty's house this evening.

Dot called me first thing this morning to tell me that she is leaving tomorrow for Louisiana. She tried to reach Snuff at the hospital, but we he was not permitted to leave his bed to go to the phone. Snuff happened to hear the nurse say that, and when she left he quietly stole out of bed and called Dot. She told him she was coming down immediately and that sort of perked him up. He had been convalescing, but now he's back in the hospital cause his leg troubles him again.

Last night I was in the dumps, as I told you, and to sort of help myself along. I sat down and scribbled a sort of makeshift valentine to you, on a v-mail form. It isn't anything much, but it helped me out of my mood.

I feel pretty good today after a good night's rest. I showered and set my hair before going to bed and got to bed about 12. I slept uninterrupted till 7:45 and awoke feeling very refreshed. It's funny what a good night of sleep can do for you!

I didn't have any mail yesterday, except a letter from the War Bond Office stating that the matter is being transferred to your side. In case you hear anything about it, you may tell them that as far as you know I've received the Nov. bond, but I have not received the Dec. one. I shall finish this before leaving for the shower, as there may be some mall from you today.

There was no mail, baby, except a nice letter from Harry Weinman and he's very well pleased with his present setup.

It was like spring all day, in spite of the slush, ice and snow which continues to cover most everything. It's difficult to believe that Spring will soon be here. If only I knew I would see you then -

Clara Wagman called to confirm that she will be up tomorrow evening for dinner. I'm most anxious to pay her the money I owe her for the vitamin tablets. She got them for me way back in November.

So much for now, darling, and I'm just about ready to leave for the shower. I'm wearing my black velvet suit and dorsay shoes (even though they hurt) and the fuschia blouse Gloria gave me for my birthday last year - and the locket. Adele kept stalling me and making all sorts of excuses to keep me from going, but she finally relented. She's a good girl tonight. I love you, Phil - gee but it sounds good to say your name, sweet.

Just because I have plenty to say tonight, I don't have the time to say it in. That is life! The afternoon's mail brought me your very long and very moving letter of 16 Jan, telling all about your trip to New York. Sorry it couldn't have been a pleasure trip, honey, but I guess everything can't be for pleasure, can it? I'm very glad, Sweet, that you managed to see the Gutkins and Jackie N. By the way, you said something that led me to believe that all is not well with Jack Gutkin, but you did not make it clear. What happened to him? I had no idea, Chippie, that Jack N. thought so much and so often of me that he actually “missed” me! It makes me feel so much the worse when I think how long I haven’t written to him. However, my leave comes up on the 10th and this time ! really mean to catch up on my correspondence. Your letter also told the distressing news of Morris death, but I knew about it from subsequent letters that arrived previously. Glo's letter arrived by the same post, and I certainly enjoyed reading it. I particularly liked the way she acknowledged your visit. She writes “Your Chippie brightened the New York atmosphere by her presence this week-end” - which was, no doubt, more truth than flattery. She also mentions a “bull-session" you two had in bed one night  and dares me to guess the topic of your conversation. How many guesses do I get? Perhaps the most welcome letter of all that reached me today, though, was your V-mail of 26 Jan., which told (so dramatically) the glad tidings  of Eddie's return home for good - and I do mean good! God knows, it’s about time something happened in the family to give everyone a new lease on life! Give him my best, Sweet, and ask him if he won’t drop me a few lines. I took time out this morning to have three small cavities in my teeth filled - and how long is it since you visited the dentist, eh? Just time and space enough left, my darling, to tell you that  I admire your motives in making the trip to New York. It was a beautiful gesture, and I love you for it, but then, I love everything about you, Ev.
- down below, or way up here - I am
Your adoring Phil