Post #571 - February 5, 1945 Tonight for Some Funny Reason I'm in a Terrible Mood and The News on All Fronts is Unprecedentedly Promising of an Early End of Resistance in Germany 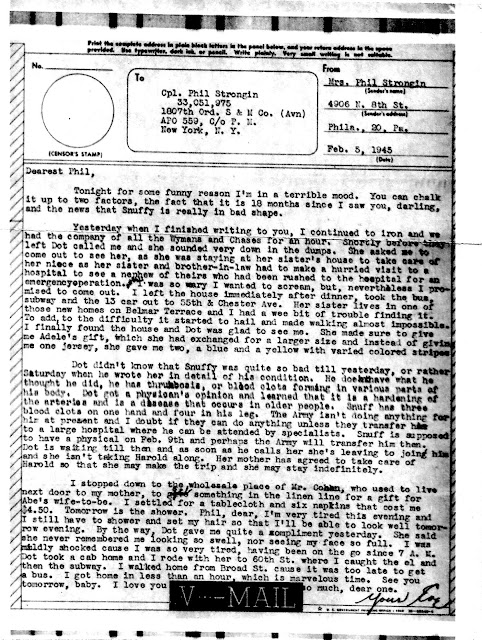 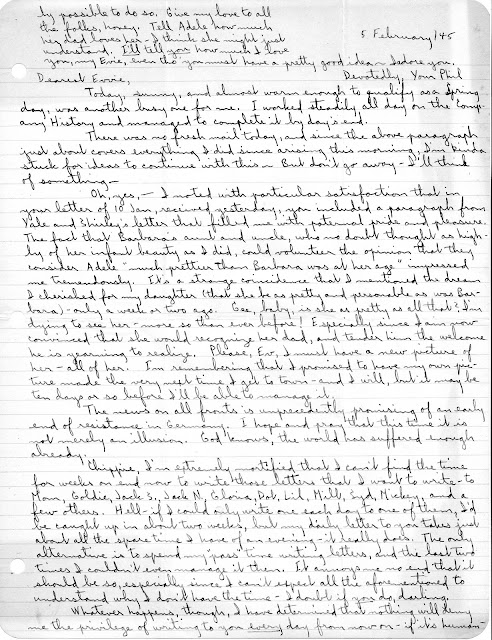 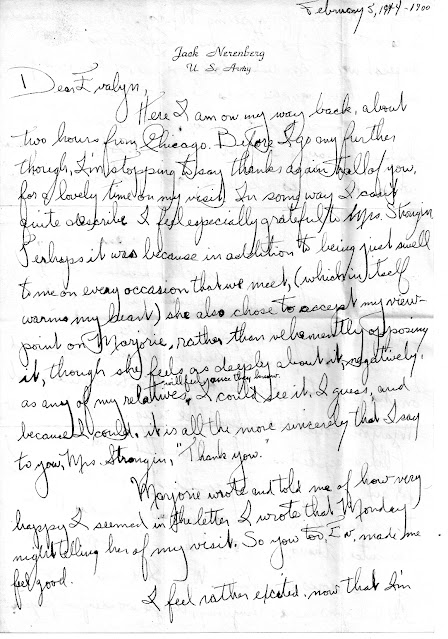 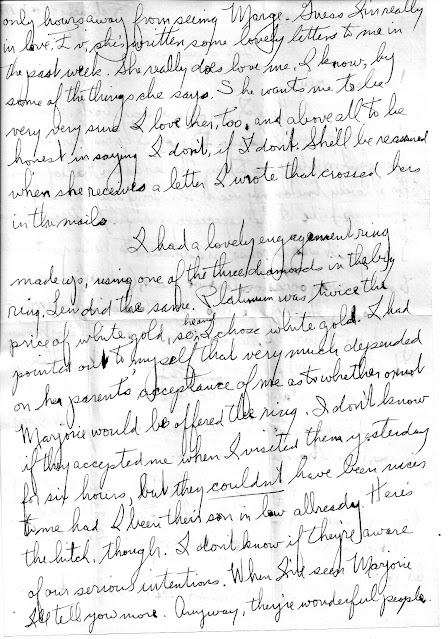 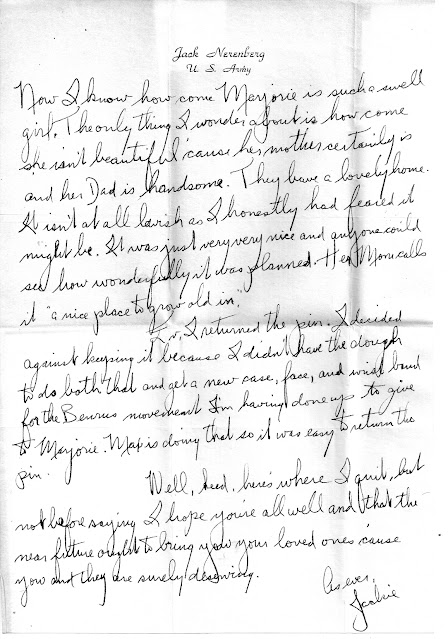 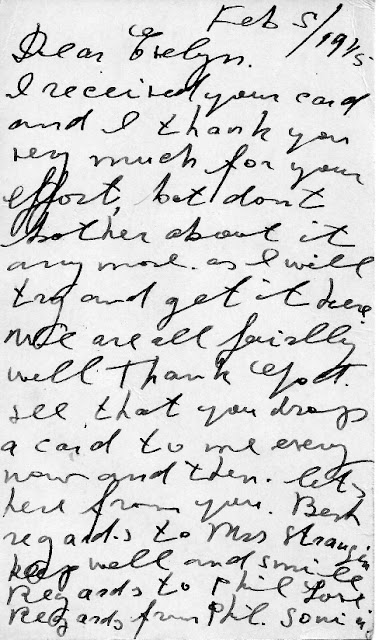 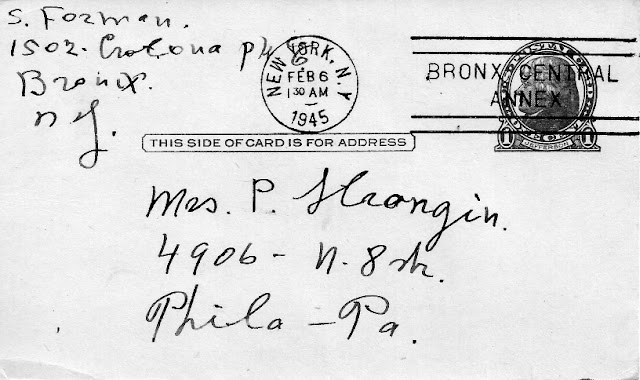 Tonight for some funny reason I'm in a terrible mood. You can chalk it up to two factors, the fact that it is 18 months since I saw you, darling. and the news that Snuffy is really in bad shape.

Yesterday when I finished writing to you, I continued to iron and we had the company of all the Wymans and Chases for an hour. Shortly before they left Dot called me and she sounded very down in the dumps. She asked me come out to see her, as she was staying at her sister's house to take care of her niece as her sister and brother-in-law had to make a hurried visit to hospital to see a nephew of theirs who had been rushed to the hospital for an emergency operation. I was so weary I wanted to scream, but, nevertheless I promised to come out. I left the house immediately after dinner, took the bus, subway and the 13 car out to 55th & Chester Ave. Her sister lives in one of those new homes on Belmar Terrace and I had a wee bit of trouble finding it. To add to the difficulty, it started to hail and that made walking almost impossible. I finally found the house and Dot was glad to see me. She made sure to give me Adele's gift, which she had exchanged for a larger size and instead of giving me one jersey, she gave me two, a blue and a yellow with varied colored stripes.

Dot didn't know that Snuffy was quite so bad till yesterday, or rather Saturday when he wrote her in detail of his condition. He doesn’t have what he thought he did, he has thrumbosls, or blood clots forming in various parts of his body. Dot got a physician's opinion and learned that it is a hardening of the arteries and is a disease that occurs in older people. Snuff has three blood clots in one hand and four in his leg. The Army isn't doing anything for him at present and I doubt if they can do anything unless they transfer him to a large hospital where he can be attended by specialists. Snuff Is supposed to have a physical on Feb. 9th and perhaps the Army will transfer him then. Dot is waiting till then and as soon as he calls her she's leaving to join him and she isn't taking Harold along. Her mother has agreed to take care of Harold so that she may make the trip and she may stay indefinitely.

I stopped down to the wholesale place of Mr. Cohen, who used to live next door to my mother, to get something in the linen line for a gift for Abe’s wife-to-be. I settled for a tablecloth and six napkins that cost me $4.50. Tomorrow is the shower. Phil, dear, I'm very tired this evening and I still have to shower and set my hair so that I'll be able to look well tomorrow evening. By the way, Dot gave me quite a compliment yesterday. She said she never remembered me looking so swell, nor seeing my face so full. I was mildly shocked cause I was so very tired, having been on the go since 7 A.M. Dot took a cab home and I rode with her to 60th St. where I caught the el and then the subway. I walked home from Broad St. cause it was too late to get a bus, I got home in less than an hour, which is marvelous time. See you tomorrow, baby. I love you so much, dear one.

Today, sunny, and almost warm enough to qualify as a Spring day, was another busy one for me. I worked steadily all day on the Company History and managed to complete it by day’s end.
There was no fresh mail today, and since the above just about covers everything I did since arising this morning, I’m kinda stuck for ideas to continue with this.—But don't go away—I’ll think of something—

Oh yes, - I noted with particular satisfaction that in your letter of 10 Jan, received yesterday, you included a paragraph from Yale and Shirley's letter that filled me with paternal pride and pleasure. The fact that Barbara's aunt and uncle, who no doubt thought as highly of her infant beauty as I did, could volunteer the opinion that they consider Adele "much prettier than Barbara was at her age" impressed me tremendously. It's a strange coincidence that I mentioned the dream I cherished for my daughter (that she be as pretty and personable as was Barbara) only a week or two ago. Gee, baby, is she as pretty as all that? I'm dying to see her, more so than ever before! Especially since I am convinced that she would recognize her dad, and tender him the welcome he is yearning to realize. Please, Ev, I must have a new picture of her - all of her! I'm remembering that I promised to have my picture made the very next time I get to town and I will, but it may be ten days or so before I'll be able to manage it.
The news on all fronts is unprecedentedly promising of an early end of resistance in Germany. I hope and pray that this time it is not merely an illusion. God knows, the world has suffered enough already.

Chippie, I'm extremely mortified that I can’t find the time for weeks on end now to write those letters that I want - to Mom, Goldie, Jack S., Jack N., Gloria, Dot, Lil, Milt, Syd, Mickey, and a few others. Hell - if I could only write one each day to one of them, I'd be caught up in about two weeks, but my daily letter to you takes just about all the spare time I have of an evening—it really does. The only alternative is to spend my “pass" time writing letters, and the last two times I couldn’t even manage it then. It annoys me no end and that it should be so, especially since I can’t expect all the aforementioned to understand why I don't have the time—I doubt if you do, darling.
Whatever happens, though, I have determined that nothing will deny me the privilege of writing to you every day from now on - if it's humanly possible to do so. Give my love to all the folks, honey. Tell Adele how much her dad loves her—I think she might just understand. I'll tell you how much I love you, my Evvie, even tho you must have a pretty good idea—I adore  you.
Devotedly, Your Phil
February 5, 1945 - 19:00 (misdated 1944)
Dear Evelyn,
Here I am on my way back, about two hours from Chicago. Before I go any further, though, I’m stopping to say thanks, again, to all of you for a lovely time on my visit. In some way I can’t quite describe, I feel especially grateful to Mrs. Strongin. Perhaps it was because in addition to being just swell to me on every occasion that we meet, (which in itself warms my heart) she also chose to accept my viewpoint on Marjorie, rather than vehemently opposing it, though she feels as deeply about it negatively as any of my relatives will feel once they know. I could see it, I guess, and because I could, it is all the more sincerely that I say to you, Mrs. Strongin, “Thank you.”
Marjorie wrote and told me of how very happy I seemed in the letter I wrote that Monday night telling her of my visit. So you too, Ev, made me feel good.
I feel rather excited now that I’m only hours away from seeing Marge. Guess I’m really in love. Ev, she’s written some lovely letters to me in the past week. She really does love me. I know, by some of the things she says. She wants me to be very, very sure I love her, too, and above all to be honest in saying I don’t, if I don’t. She’ll be reassured when she receives a letter I wrote that crossed hers in the mails.
I had a lovely engagement ring made up, using one of the three diamonds in the big ring. Len did the same. Platinum was twice the price of white gold, so he and I chose white gold. I had pointed out to myself that very much depended on her parents’ acceptance of me as to whether or not Marjorie would be offered the ring. I don’t know if they accepted me when I visited them yesterday for six hours, but they couldn’t have been nicer to me had I been their son-in-law already. Here’s the hitch, though. I don’t know if they’re aware of our serious intentions. When I’ve seen Marjorie, I’ll tell you more. Anyway, they’re wonderful people.
Now I know how come Marjorie is such a swell girl. The only thing I wonder about is how come she isn’t beautiful ’cause her mother certainly is and her Dad is handsome. They have a lovely home. It isn’t at all lavish as I honestly had feared it might be. It was just very, very nice and anyone could see how wonderfully it was planned. Her Mom calls it “a nice place to grow old in.”
Ev, I returned the pin. I decided against buying it because I didn’t have the dough to do both that and get a new case, face, and wrist band for the Benrus movement I’m having done up to give to Marjorie. Max is doing that so it was easy to return the pin.
Well, kid, here’s where I quit, but not before saying I hope you’re all well and that the near future ought to bring you your loved ones ’cause you and they are surely deserving.
As ever,
Jackie
Feb. 5, 1945
Dear Evelyn,
I received your card and I thank you very much for your effort. Don’t bother about it anymore, as I will try and get it here. We are all fairly well thank you. See that you drop a card to me every now and then. Let’s here [sic] from you. Best regards to Mrs. Strongin. Keep well and smile. Regards to Phil. Regards from Phil.
Love, Sonia (Forman)
Posted by Marilyn at 12:00 PM