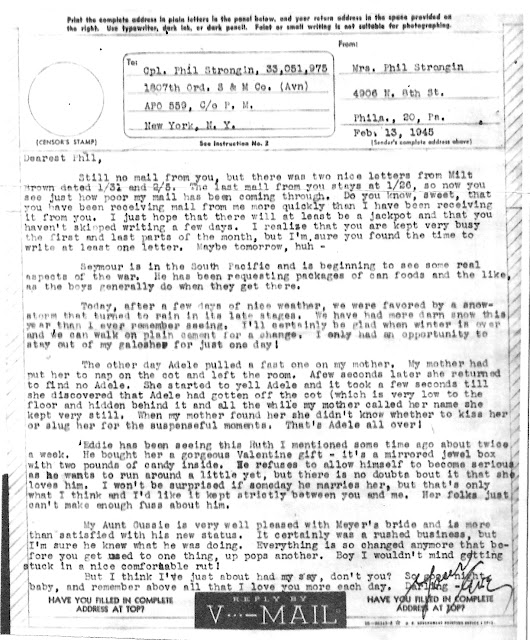 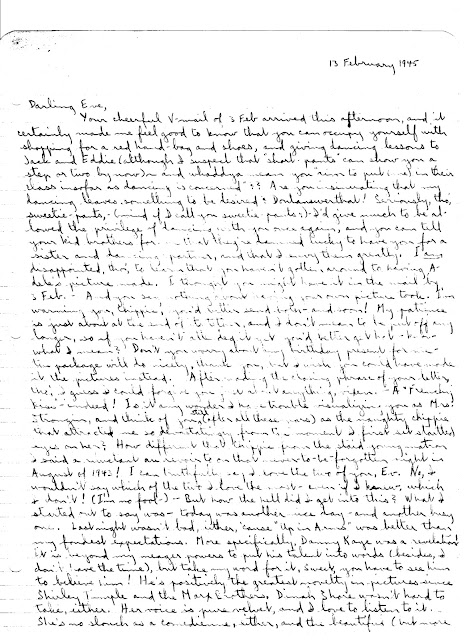 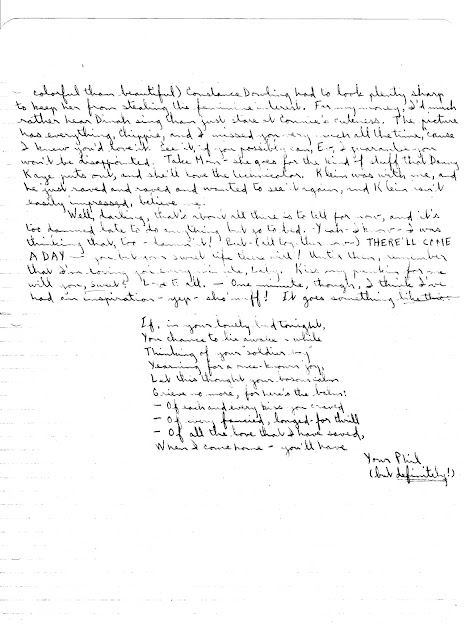 Still no mall from you, but there were two nice letters from Milt Brown dated 1/31 and 2/5. The last mail from you stays at 1/26, so now you see just how poor my mail has been coming through. Do you know, sweet, that you have been receiving mall from me more quickly than I have been receiving it from you. I just hope that there will at least be a jackpot and that you haven't skipped writing a few days. I realize that you are kept very busy the first and last parts of the month, but I'm sure you found the time to write at least one letter. Maybe tomorrow, huh -

Seymour is in the South Pacific and is beginning to see some real aspects of the war. He has been requesting packages of can foods and the like, as the boys generally do when they get there.

Today, after a few days of nice weather, we were favored by a snowstorm that turned to rain in its late stages. We have had more darn snow this year than I ever remember seeing. I’ll certainly be glad when winter is over and we can walk on plain cement for a change. I only had an opportunity to stay out of my galoshes for just one day!

The other day Adele pulled a fast one on my mother. My mother had put her to nap on the cot and left the room. A few seconds later she returned to find no Adele. She started to yell Adele and it took a few seconds till she discovered that Adele had gotten off the cot (which is very low to the floor) and hidden behind it and all the while my mother called her name she kept very still. When my mother found her she didn't know whether to kiss her or slug her for the suspenseful moments. That’s Adele all over!

Eddle has been seeing this Ruth I mentioned some time ago about twice a week. He bought her a gorgeous Valentine gift - it's a mirrored jewel box with two pounds of candy inside. He refuses to allow himself to become serious as he wants to run around a little yet, but there is no doubt about it that she loves him. I won't be surprised if someday he marries her, but that's only what I think and I’d like it kept strictly between you and me. Her folks just can't make enough fuss about him.

My Aunt Gussie ls very well pleased with Meyer’s bride and is more than satisfied with his new status. It certainly was a rushed business, but I'm sure he knew what he was doing. Everything is so changed anymore that before you get used to one thing, up pops another. Boy I wouldn't mind getting stuck in a nice comfortable rut!

But I think I've just about had my say, don't you? So good night baby, and remember above all that I love you more each day, Darling -
Your Eve

Your cheerful V-mail of 3 Feb arrived this afternoon, and it certainly made me feel good to know that you can occupy yourself with shopping for a red hand-bag and shoes, and giving dancing lessons to Jack and Eddie (although I suspect that “short pants" can show you a step or two by now)—and whaddya mean you “aim to put (me) in their class insofar as dancing in concerned"?? Are you insinuating that my dancing leaves something to be desired? Dontanswerthat! Seriously, tho’, sweetie-pants, (mind if a call you sweetie-pants?) - I'd give much to be allowed the privilege of dancing with you again, and you can tell your kid brothers for me that they’re damned lucky to have you for a sister and dancing partner, and that I envy them greatly. l am disappointed, tho’, to hear that you haven’t gotten around to having Adele's picture made. I thought you might have it in the mail by 3 Feb.! And you say nothing about having your own picture took. I’m warning you, Chippie, you’d better  send them soon! My patience is just about at the end of its tether, and I don’ mean to be put off any longer, so if you haven’t already done it yet, you'd better get hot - know what I mean? Don't you worry about any birthday present for me - this package will do nicely, thank you, but I wish you could have made it the pictures instead. After reading the closing phrase of your letter tho’ I guess I could forgive you just about anything, vixen. - Å “Frenchy kiss” indeed! Is it any wonder I have trouble visualizing you as Mrs. Strongin, and think of you still (after all these years) as the naughty Chippie that attracted me so devastatingly from the moment I first set startled eyes on her? How different that Chippie from the staid young matron I said a reluctant au revoir to on that never to be forgotten night in August of 1943! I can truthfully say I love the two of you, Ev. No, t wouldn't say which of the two I love the most - even if I knew, which I don't! (I'm no fool-) -- But how the hell did I get into this? What I started out to say was - today was another nice day - and another busy one. Last night wasn't bad, either, 'cause "Up in Arms" was better than my fondest expectations. More specifically, Danny Kaye was a revelation! It is beyond my meager powers to put his talent into words (besides, I don't have the time), but take my word for it, Sweet, you have to see him to believe him! He's positively the greatest novelty in pictures since Shirley Temple and the Marx Brothers. Dinah Shore wasn’t hard to take, either. Her voice is pure velvet, and I love to listen to it. She's no slouch as a comedienne, either, and the beautiful (but more colorful than beautiful) Constance Dowling had to look plenty sharp to keep her from stealing the feminine interest. For my money, I'd much rather hear Dinah sing than just stare at Connie's cuteness. The picture has everything, Chippie, and I missed you very much all the time, ’cause I know you'd love it. See it, if you possibly can, Ev. I guarantee you won't be disappointed. Take Mom - she goes for the kind of stuff that Danny Kaye puts out, and she'll love the technicolor. Klein was with me, and he just raved and raved and wanted to see it again, and Klein isn’t easily impressed, believe me.
Well, darling, that's about all there is to tell for now, and it's too damned late to do a thing but go to bed. Yeah - I know - I was thinking that, too - damn it! But - (all together now—) THERE'LL COME A DAY—you bet your sweet life there will! Until then, remember that I’m loving you every minute, baby. Kiss my punkin for me
will you, Sweet? Love to all. - One minute, though, I think I’ve had an inspiration - yep - sho 'nuff! It goes something like this:

If in your lovely bed tonight,
You chance to lie awake - while
Thinking of your “soldier boy”
Yearning for a once-known joy.
Let this thought your bosom calm
Grieve no more, for here's the balm:
—Of each and every kiss you craved
—Of every fancied, longed-for thrill
—Of all the love that I have saved,
When I come home - you'll have

Your Phil
(but definitely!)
Posted by Marilyn at 9:27 AM