Post #580 - February 14, 1945 I Received a Long Letter from Snuff, Baring Most of his Fears and My Life Away from You is Utterly without Meaning 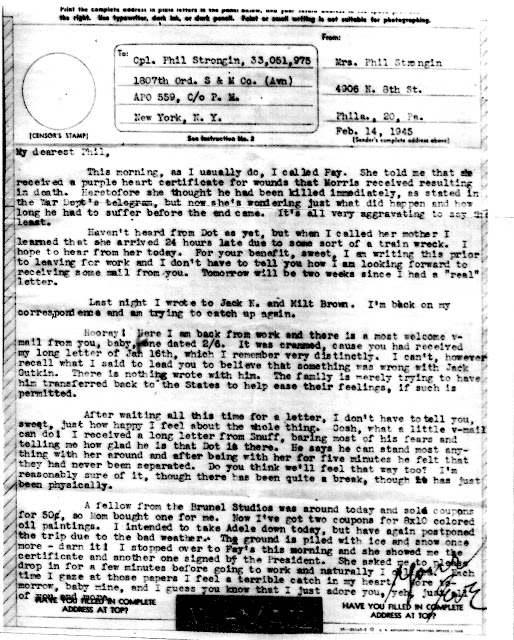 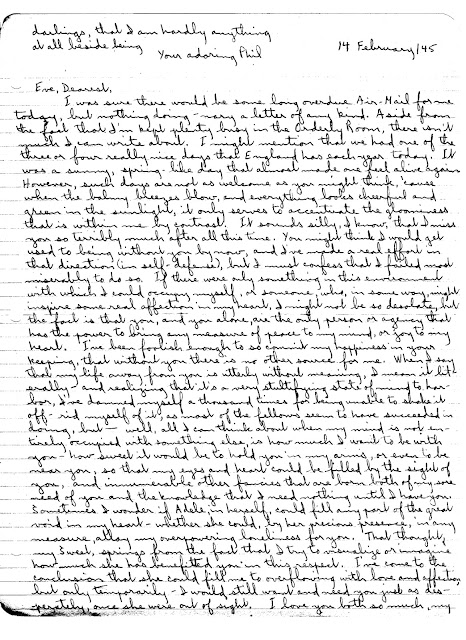 This morning, as I usually do, I called Fay. She told me that she received a purple heart certificate for wounds that Morris received resulting in death. Heretofore she thought he had been killed immediately, as stated in the War Dept’s telegram, but now she's wondering just what did happen and how long he had to suffer before the end came. It's all very aggravating to say the least.

Haven't heard from Dot as yet, but when I called her mother I learned that she arrived 24 hours late due to some sort of a train wreck. I hope to hear from her today. For your benefit, sweet, I am writing this prior to leaving for work and I don't have to tell you how I am looking forward to receiving some mail from you. Tomorrow will be two weeks since I had a "real" letter.
Last night I wrote to Jack N. and Milt Brown. I'm back on my correspondence and am trying to catch up again.

Hooray! Here I am back from work and there is a most welcome v-mail from you, baby, one dated 2/6. It was crammed, cause you had received my long letter of Jan 16th, which I remember very distinctly. I can't, however, recall what I said to lead you to believe that something was wrong with Jack Gutkin. There is nothing wrote [sic wrong] with him. The family is merely trying to have him transferred back to the States to help ease their feelings, if such is permitted.

After waiting all this time for a letter, I don't have to tell you, sweet, just how happy I feel about the whole thing. Gosh, what a little v-mail can do! I received a long letter from Snuff, baring most of his fears and telling me how glad he is that Dot is there. He says he can stand most anything with her around and after being with her for five minutes he felt that they had never been separated. Do you think we’ll feel that way too? I'm reasonably sure of it, though there has been quite a break, though it has just been physically.

A fellow from the Brunel Studios was around today and sold coupons for 50¢, so Mom bought one for me. Now I've got two coupons for 8x10 colored oil paintings. I intended to take Adele down today, but have again postponed the trip due to the bad weather. The ground is piled with ice and snow once more - darn it! I stopped over to Fay’s this morning and she showed me the certificate and another one signed by the President. She asked me to please drop in for a few minutes before going to work and naturally I obliged. Each time I gaze at those papers I feel a terrible catch in my heart. More tomorrow, baby mine, and I guess you know that I just adore you, yeh, just.
Your Eve
14 February 1945

I was sure there would be some long overdue Air Mail for me today, but nothing doing - nary a letter of any kind. Aside from the fact that I’m kept plenty busy in the Orderly Room, there isn't much I can write about. I might mention that we had one of the three or four really nice days that England has each year today. It was a sunny, spring-like day that almost made one feel alive again. However, such days are not as welcome as you might think, ’cause when the balmy breezes blow, and everything looks cheerful and green in the sunlight, it only serves to accentuate the gloominess that is within me by contrast. It sounds silly, I know, that I miss you so terribly much after all this time. You might think I would get used to being without you by now, and I've made a real effort in that direction (in self defense), but I must confess that I failed miserably to do so. If there were only something in this environment with which I could occupy myself, or someone, who, in some way, might inspire some real affection in my heart, I might not be so desolate, but the fact is that you, and you alone, are the only person or agency that has the power to bring any measure of peace to my mind, or joy to my heart. I've been foolish enough to so commit my happiness in your keeping, that without you there is no other source for me. When I say that my life away from you is utterly without meaning, I mean it literally - and realizing that is a very stultifying state of mind to harbor, I've damned myself a thousand times for being unable to shake it off - rid myself of it, as most of the fellows seem to have succeeded in doing, but - well, all I can think about when my mind is not entirely occupied with something else, is how much I want to be with you - how sweet it would be to hold you in my arms, or even to be near you, so that my eyes and heart could be filled by the sight of you, and innumerable other fancies that are born both of my sore need of you and the knowledge that I need nothing until I have you. Sometimes I wonder if Adele, in herself, could fill any part of the great void in my heart - whether she could by her precious presence, in any measure, allay my overpowering loneliness for you. That thought, my Sweet, springs from the fact that I try to visualize or imagine how much she has benefitted you in this respect. I've come to the conclusion that she could fill me to overflowing with love and affection - but only temporarily - I would still want and need you just as desperately, once she were out of sight. I love you both so much, my darlings, that I am hardly anything at all beside beingYour adoring Phil
Posted by Marilyn at 9:53 AM