Post #589 - February 25, 1945 Fay Received a Letter from the C.O. of Morris’ Outfit Giving Her More Details Concerning his Death and A Yiddish Letter from Rebecca Strongin, Philip’s Mother 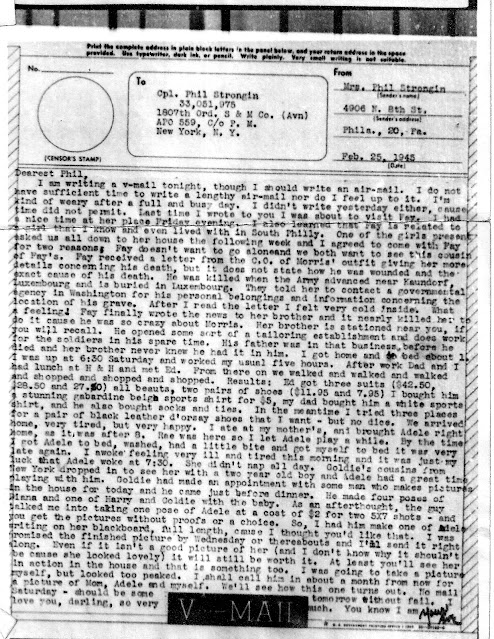 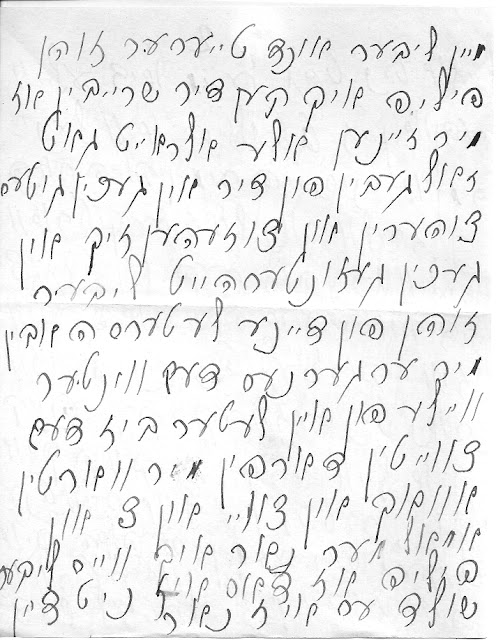 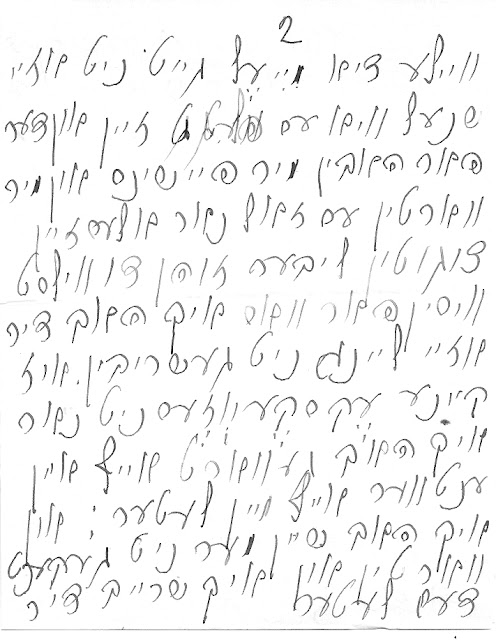 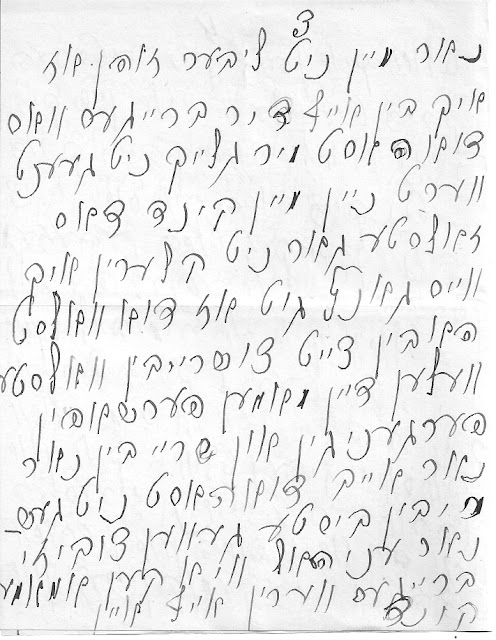 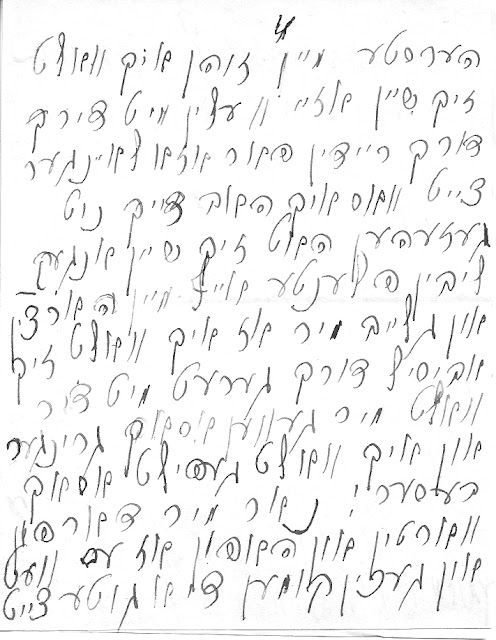 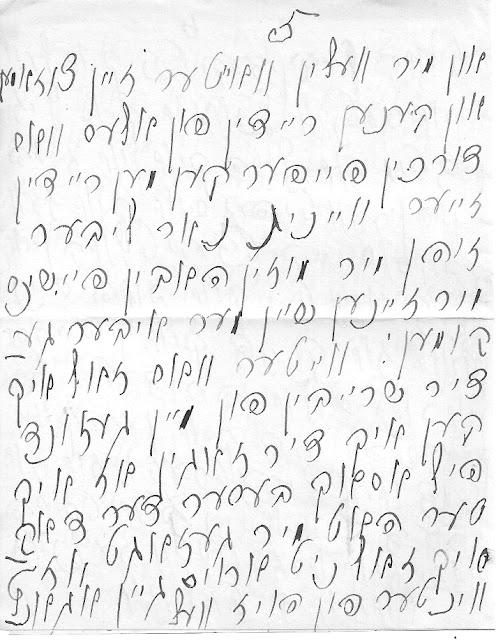 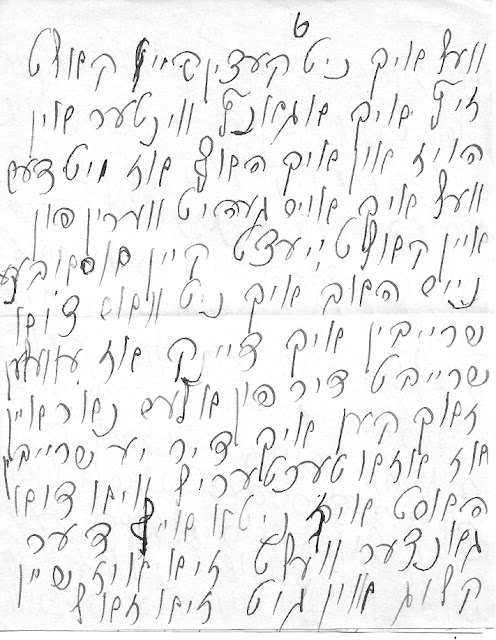 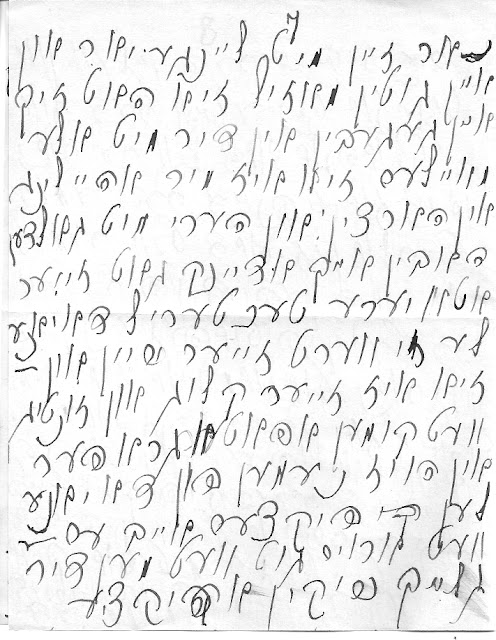 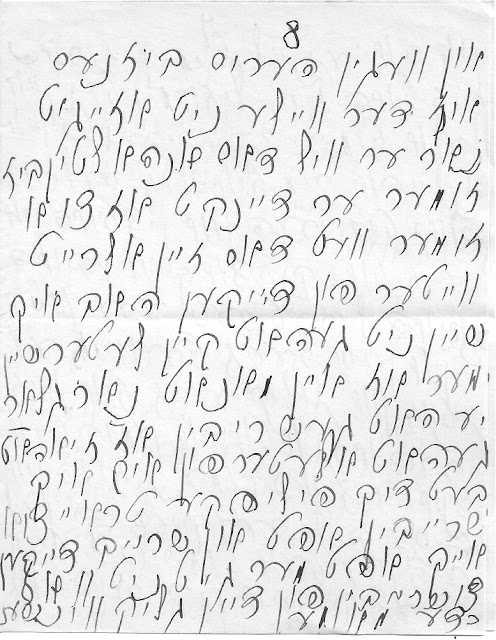 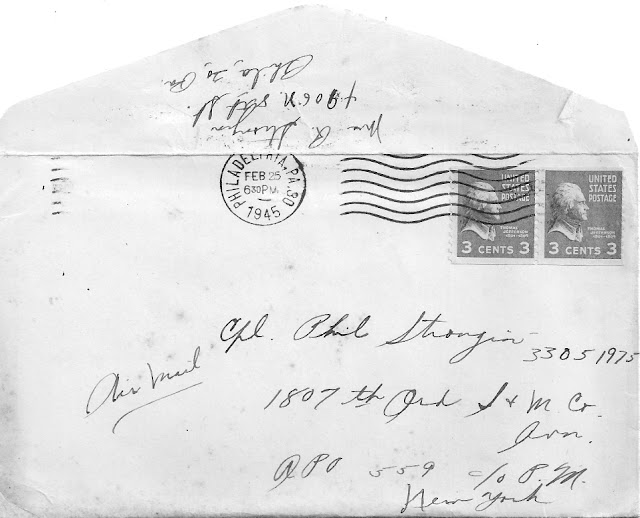 I am writing a v-mail tonight, though I should write an air-mail. I do not have sufficient time to write a lengthy air-mail nor do I feel up to it. I’m kind of weary after a full and busy day. I didn't write yesterday either, cause time did not permit. Last time I wrote to you I was about to visit Fay. I had a nice time at her place Friday evening. I also learned that Fay is related to a girl that I know and even lived with in South Philly. One of the girls present asked us all down to her house the following week and I agreed to come with Fay for two reasons: Fay doesn't want to go alone and we both want to see this cousin of Fay’s. Fay received a letter from the C.O. of Morris’ outfit giving her more details concerning his death, but it does not state how he was wounded and the exact cause of his death. He was killed when the Army advanced near Kaundorf, Luxembourg, and is buried in Luxembourg. They told her to contact a governmental agency in Washington for his personal belongings and information concerning the location of his grave. After I read the letter I felt very cold inside. What a feeling! Fay finally wrote the news to her brother and it nearly killed her to do it cause he was so crazy about Morris. Her brother is stationed near you, if you will recall. He opened some sort of a tailoring establishment and does work for the soldiers in his spare time. His father was in that business, before he died and her brother never knew he had it in him. I got home and to bed about 1. I was up at 6:30 Saturday and worked my usual five hours. After work Dad and I had lunch at H & H and met Ed. From there on we walked and walked and walked and shopped and shopped and shopped. Results: Ed got three suits ($42.50, 28.50 and 27.50) all beauts, two pairs of shoes ($11.95 and 7.95) I bought him 4 stunning gabardine beige sports shirt for $5, my dad bought him a white sports shirt, and he also bought socks and ties. In the meantime I tried three places for a pair of black leather d’orsay shoes that I want - but no dice. We arrived home, very tired, but very happy. I ate at my mother’s, and brought Adele right home, as it was after 8. Rae was here so I let Adele play a while. By the time I got Adele to bed, washed, had a little bite and put myself to bed it was very late again. I awoke feeling very ill and tired this morning and it was just my luck that Adele woke at 7:30. She didn't nap all day. Goldie's cousins from New York dropped in to see her with a two year old boy and Adele had a great time playing with him. Goldie had made an appointment with some man who makes pictures in the house for today and he came just before dinner. He made four poses of Diana and one of Harry and Goldie with the baby. As an afterthought, the guy talked me into taking one pose of Adele at a cost of $2 for two 5X7 shots - and you get the pictures without proofs or a choice. So, I had him make one of Adele writing on her blackboard, full length, cause I thought you'd like that. I was promised the finished picture by Wednesday or thereabouts and I’ll send it right along. Even if it isn't a good picture of her (and I don't know why it shouldn't be cause she looked lovely) it will still be worth it. At least you'll see her in action in the house and that is something too. I was going to take a picture myself, but looked too peaked. I shall call him in about a month from now for a picture of Mom, Adele and myself. We'll see how this one turns out. No mail Saturday - should be some tomorrow without fail. I love you, darling, so very much. You know I am

February 25, 1945
My darling dear son, Philip,
I can write to you that we are all well. God should give us a good life. It was good to hear from you. I know that you are well. My dear son, from your letters we assume that our winter is worse than yours, but the amount of time between letters from the first to the second is too great. We need more letters in the amount of time between the first letter and the next letter. You should have written at least three, my dear Philip. We know that it’s not your fault, but only because the problem is with the mail service. It doesn’t go very fast, so it must be their fault, and because of that we understand and we will have to wait. Let it only be good news, though, my dear loving son. You should know why I have not written you for so long. I have no excuses, but I have been waiting for an answer to my letters, and now I have stopped waiting anymore, and I have found the words that I am writing to you in this letter. Because of my love, son, I am not angry with you that you have not found time to write to me.  I know very well that you must be angry with me because you found time to write to my other kids, but did not find time to write to your mother and not upset her. Even if you wrote a little bit I would be satisfied, but you have not written at all. If you are very busy, just write a small paragraph for your mother. If you don’t, I will become upset and angry. Do you hear me, my son? I want to be proud to know that one letter is for me alone. Why must I wait for such a long, long time? I have not seen you for a long time. Have you found another love? My heart is faint and my love of this world has faltered and believe me that I have had it with your world. I was feeling very alienated, but I will feel better with just a few words from you, and I hope that you will come home soon. When you come home we will be able to sit, and will be able to talk about everything that has happened and that was in the newspapers. It will be easier to talk than to write, since on paper, it is very difficult to find the right words and feelings. But, my dear son, we have to have patience and already much time has passed. Continuing on, what shall I write to you about my health? I can tell you that I feel much better. The doctor has told me not to go outside of the house for the whole winter. So, I don’t go out at all. I have sat for the entire winter in the house and I am waiting and hoping not to catch a cold. There is no other news. I don’t have a lot to write and I don’t know what additional news would be interesting to you because I think that Evelyn writes to you about everything already. But, one thing I can write to you is about your daughter. There’s none other like her in the world. She is pretty, and intelligent, and good. May she live for many years and with much luck. She has loved me and because of this, she is my healing power and my heart. Harry and Goldie have also, thank God, a dear daughter who is finally learning some words. She’s also very wise and intelligent. On Sunday, perhaps, there will come a photographer to the house to take pictures of the little ones. If they come out good, then we will send you copies of the pictures and possibly go outside. If I’m not as well, then I will wait until summer. I think by summer it will be all right. Furthermore, another thing to worry about is that I have not heard from your brother, Jack, nor have I had any more letters from him. Only Gloria had written that she has gotten letters from you. I ask you, my dear Philip, to write at least a little note more often.
Your unlucky mother
Posted by Marilyn at 12:13 PM