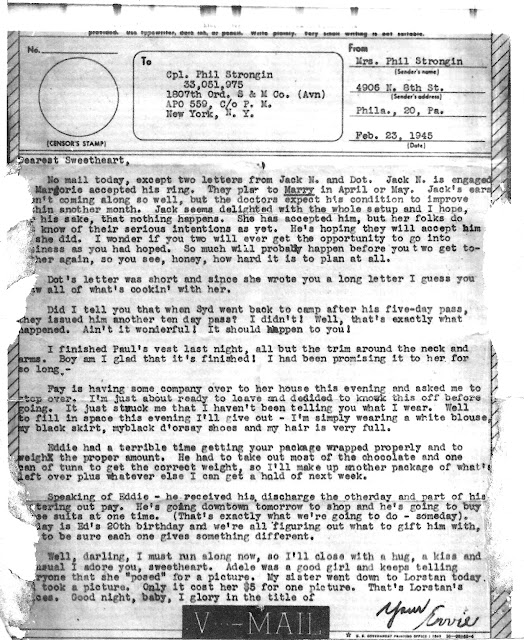 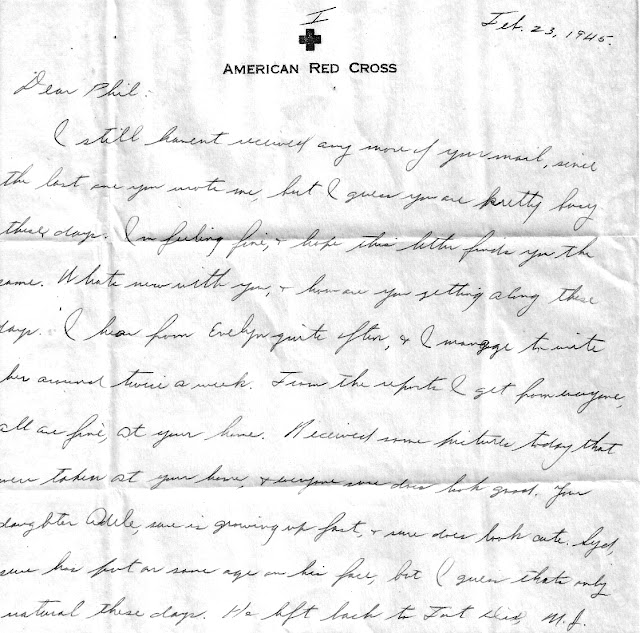 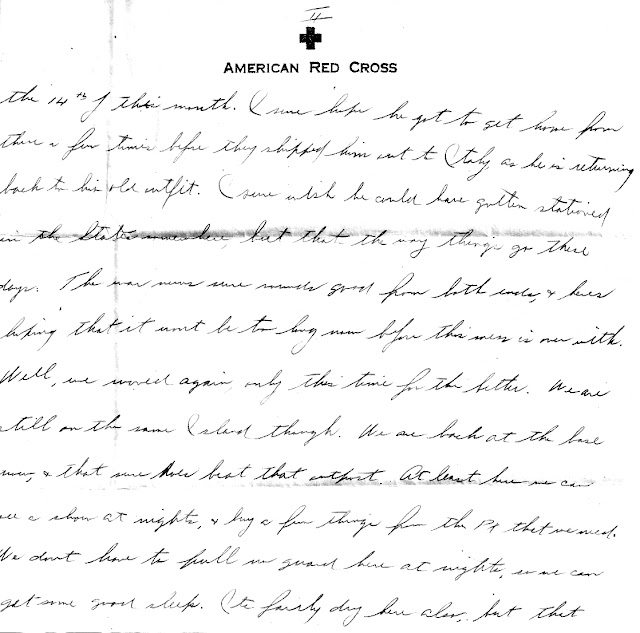 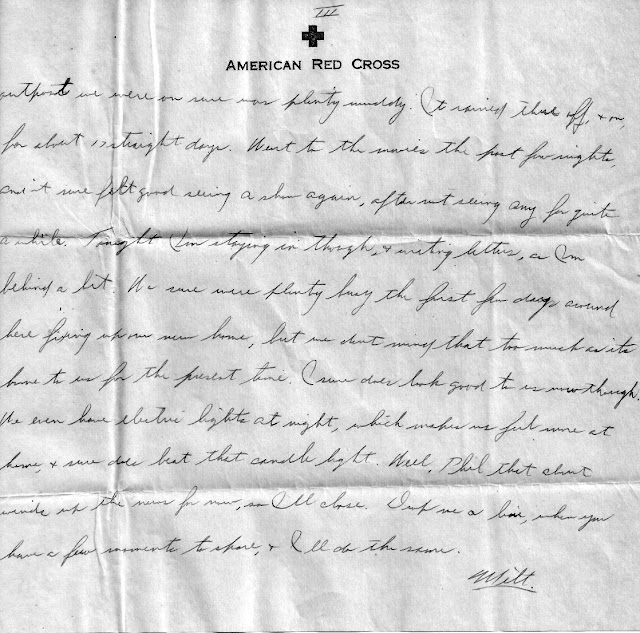 No mail today, except two letters from Jack N. and Dot. Jack N. is engaged. Marjorie accepted his ring. They plan to marry in April or May. Jack's ear isn't coming along so well, but the doctors expect his condition to improve within another month. Jack seems delighted with the whole setup and I hope, for his sake, that nothing happens. She has accepted him, but her folks do not know of their serious intentions as yet. He's hoping they will accept him she did. I wonder if you two will ever get the opportunity to go into business as you had hoped. So much will probably happen before you two get together again, so you see, honey, how hard it is to plan at all.

Dot's letter was short and since she wrote you a long letter I guess you know all of what's cookin' with her.

Did I tell you that when Syd went back to camp after his five-day pass, they issued him another ten day pass? I didn't! Well, that's exactly what happened. Ain't It wonderful! It should happen to you!

I finished Paul's vest last night, all but the trim around the neck and arms. Boy am I glad that it is finished! I had been promising it to her for so long. -

Fay is having some company over to her house this evening and asked me to stop over. I’m just about ready to leave and decided to knock this off before going. It just struck me that I haven't been telling you what I wear. Well to fill in space this evening I’ll give out - I'm simply wearing a white blouse, my black skirt, my black d'orsay shoes and my hair is very full.

Eddie had a terrible time getting your package wrapped properly and to weigh the proper amount. He had to take out most of the chocolate and one can of tuna to get the correct weight, so I'll make up another package of what’s left over plus whatever else I can get a hold of next week.

Speaking of Eddie - he received his discharge the other day and part of his mustering out pay. He's going downtown tomorrow to shop and he's going to buy three suits at one time. (That's exactly what we're going to do - someday). Today is Ed’s 20th birthday and we're all figuring out what to gift him with, to be sure each one gives something different.

Well, darling, I must run along now, so I'll close with a hug, a kiss and the usual I adore you, sweetheart. Adele was a good girl and keeps telling everyone that she "posed" for a picture. My sister went down to Lorstan today and took a picture. Only it cost her $5 for one picture. That's Lorstan's prices. Good night, baby, I glory in the title of

Your Evvie
Feb. 23, 1945
Dear Phil:
I still haven’t received any more of your mail since the last one you wrote me, but I guess you are pretty busy these days. I’m feeling fine, & hope this letter finds you the same. What’s new with you, & how are you getting along these days. I hear from Evelyn quite often, & I manage to write her around twice a week. From the reports I get from everyone, all are fine at your home. Received some pictures today that were taken at your home, & everyone sure does look good. Your daughter, Adele, sure is growing up fast, & sure does look cute. Syd sure has put on some age on his face, but I guess that’s only natural these days. He left back to Fort Dix, N.J. the 14th of this month. I sure hope he got to get home from there a few times before they shipped him out to Italy as he is returning back to his old outfit. (sure wish he could have gotten stationed in the States somewhere, but that’s the way things go these days. The war news sure sounds good from both ends, and here’s hoping that it won’t be too long now before this mess is over with. Well, we moved again, only this time for the better. We are still on the same Island though. We are back at the base camp and that sure does beat that outpost. At least here we can see a show at night, and buy a few things from the PX that we need. We don’t have to pull no guard here at night, so we can get some good sleep. It’s fairly dry here also, but that outpost we were in sure was plenty moldy. It rained there off and on for about 17 straight days. Went to the movies the past few nights and it sure felt good seeing a show again, after not seeing any for quite a while. Tonight I’m staying in though, & writing letters, as I’m behind a bit. We sure were plenty busy the first few days around here fixing up our new home, but we don’t mind that too much as it’s home to us for the present time. It sure does look good to us now, though. We even have electric lights at night, which makes us feel more at home, and sure does beat that candle light. Well, Phil, that about winds up the news for now, so I’ll close. Drop me a line when you have a few moments to spare, & I’ll do the same.
Milt
Posted by Marilyn at 8:51 AM