Post #597 - March 7, 1945 You Seem So Terribly Far Away When the Mail is Held Up and Have Faith That We are Destined for Many Happy Years Together and A Letter from Eddy Paller 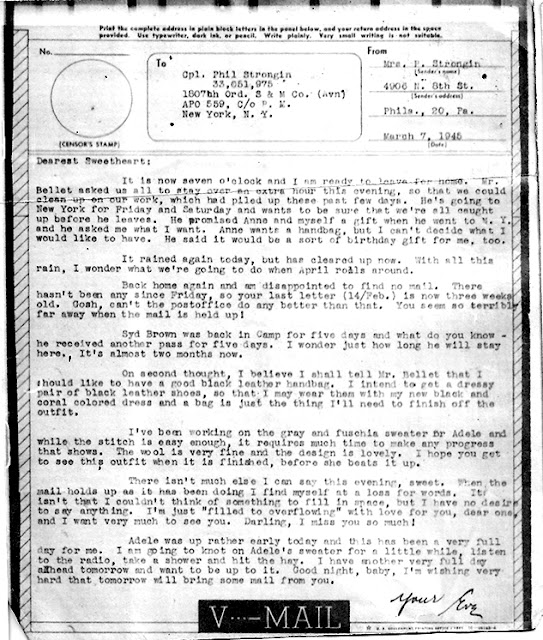 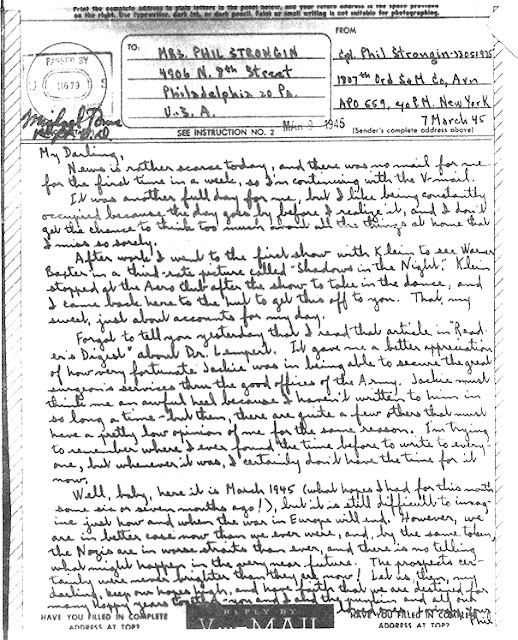 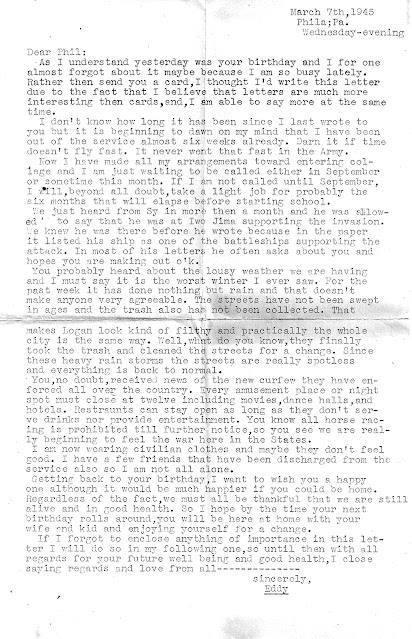 It is now seven o'clock and I am ready to leave for home. Mr. Bellet asked us all to stay over an extra hour this evening, so that we could clean up on our work, which had piled up these past few days. He's going to New York for Friday and Saturday and wants to be sure that we're all caught up before he leaves. He promised Anne and myself a gift when he went to N.Y. and he asked me what I want. Anne wants a handbag, but I can't decide what I would like to have. He said it would be a sort of birthday gift for me, too.

It rained again today, but has cleared up now. With all this rain, I wonder what we're going to do when April rolls around.

Back home again and am disappointed to find no mall. There hasn't been any since Friday, so your last letter (14/Feb.) is now three weeks old. Gosh, can't the postoffice do any better than that. You seem so terribly far away when the mail is held up!

Syd Brown was back in Camp for five days and what do you know - he received another pass for five days. I wonder just how long he will stay here. It's almost two months now.

On second thought, I believe I shall tell Mr. Bellet that I should like to have a good black leather handbag. I intend to get a dressy pair of black leather shoes, so that I may wear them with my new black and coral colored dress and a bag is just the thing I'll need to finish off the outfit.

I've been working on the gray and fuschia sweater or Adele and while the stitch is easy enough, it requires much time to make any progress that shows. The wool is very fine and the design is lovely. I hope you get to see this outfit when it is finished, before she beats it up.

There isn't much else I can say this evening, sweet. When the mail holds up as it has been doing I find myself at a loss for words. It isn't that I couldn't think of something to fill in space, but have no desire to say anything. I'm just "filled to overflowing” with love for you, dear one and I want very much to see you. Darling, I miss you so much!

Adele was up rather early today and this has been a very full day for me. I am going to knot on Adele's sweater for a little while, listen to the radio, take a shower and hit the hay. I have another very full day ahead tomorrow and want to be up to it. Good night, baby, I'm wishing very hard that tomorrow will bring some mail from you.

Your Eve
7 March 1945
My Darling,
News is rather scarce today, and there was no mail for me for the first time in a week, so I’m continuing with the V-mail.
It was another full day for me, but I like being constantly occupied because the day goes by before I realize it, and I don’t get the chance to think too much about all the things at home that I miss so sorely.
After work I went to the first show with Klein to see Warner Baxter in a third-rate picture called “Shadows in the Night.” Klein stopped at the Aero Club after the show to take in the dance, and I came back here to the hut to get this off to you. That, my sweet, just about accounts for my day.
Forgot to tell you yesterday that I read that article in “Reader’s Digest” about Dr. Lempert. It gave me a better appreciation of how very fortunate Jackie was in being able to secure the great surgeon’s services thru the good offices of the Army. Jackie must think me an awful heel because I haven’t written to him in so long a time—but then, there are quite a few others that must have a pretty low opinion of me for the same reason. I’m trying to remember where I ever found the time before to write to everyone, but whenever it was, I certainly don’t have the time for it now.
Well, baby, here it is March 1945 (what hopes I had for this month some six or seven months ago!), but it is still difficult to imagine just how and when the war in Europe will end. However, we are in better case now than we ever were, and, by the same token, the Nazis are in worse straits than ever, and there is no telling what might happen in the very near future. The prospects certainly were never brighter than they are now! Let us, then, my darling, keep our hopes high, and have faith that we are destined for many happy years together—you and I and the punkin and all our loved ones.
Lovingly,
Your Phil

As I understand yesterday was your birthday and I for one almost forgot about it maybe because I am so busy lately. Rather then send you a card, I thought I'd write this letter due to the fact that I believe that letters are much more interesting then cards, and, I am able to say more at the same time.

I don't know how long it has been since I last wrote to you but it is beginning to dawn on my mind that I have been out of the service almost six weeks already. Darn it if time doesn't fly fast. It never went that fast in the Army.

Now I have made all my arrangements toward entering college and I am just waiting to be called either in September or sometime this month. If I am not called until September, I will, beyond all doubt, take a light job for probably the six months that will elapse before starting school.

We just heard from Sy in more then a month and he was allowed to say that he was at Iwo Jima supporting the invasion. We knew he was there before he wrote because in the paper it listed his ship as one of the battleships supporting the attack. In most of his letters he often asks about you and hopes you are making out o'k.

You probably heard about the lousy weather we are having and I must say it is the worst winter I ever saw. For the past week it has done nothing but rain and that doesn't make anyone very agreeable. The streets have not been swept in ages and the trash also has not been collected. That makes Logan look kind of filthy and practically the whole city is the same way. Well, what do you know, they finally took the trash and cleaned the streets for a change. Since these heavy rain storms the streets are really spotless and everything is back to normal.
You, no doubt, received news of the new curfew they have enforced all over the country. Every amusement place or night spot must close at twelve including movies, dance halls, and hotels. Restraunts can stay open as long as they don't serve drinks nor provide entertainment. You know all horse racing is prohibited till further notice, so you see we are really beginning to feel the war here in the States.

I am now wearing civilian clothes and maybe they don't feel good. I have a few friends that have been discharged from the service also so I am not all alone.

Getting back to your birthday, I want to wish you a happy one although it would be much happier if you could be home. Regardless of the fact, we must all be thankful that we are still alive and in good health. So I hope by the time your next birthday rolls around, you will be here at home with your wife and kid and enjoying yourself for a change.

If I forgot to enclose anything of importance in this letter I will do so in my following one, so until then with all regards for your future well being and good health, I close saying regards and love from all--------------

sincerely,
Eddy
Posted by Marilyn at 9:12 AM