Post #598 - March 8, 1945 We'll Have One Picnic Trying to Borrow Money from the Government Without Signing Our Lives Away For It and Klein Stopped In to Show Me Six of the Biggest Eggs I Have Ever Seen 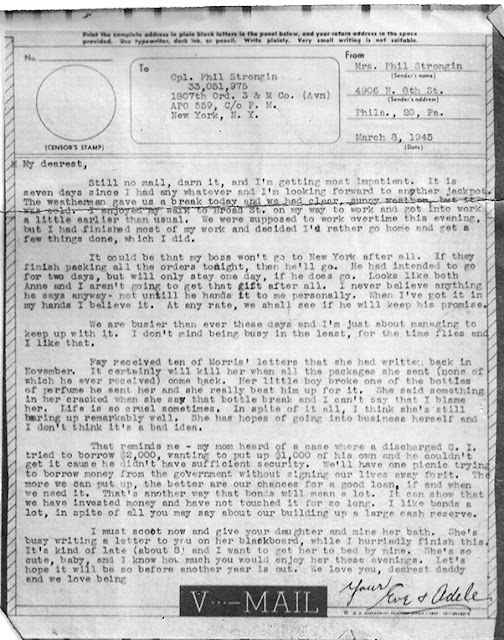 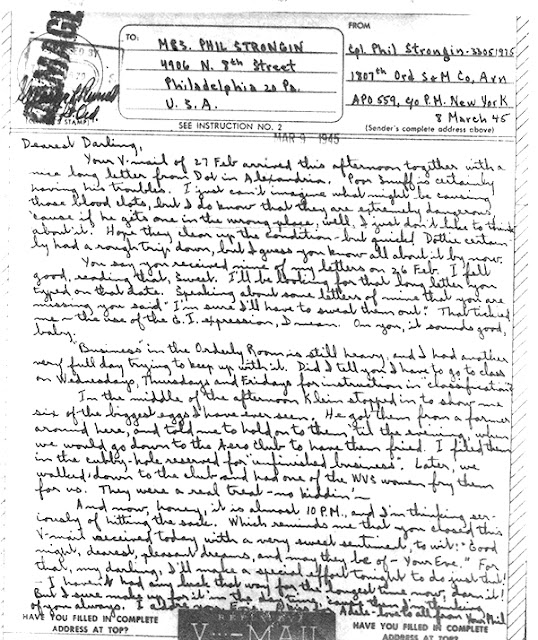 Still no mall, darn it, and I'm getting most impatient. It is seven days since I had any whatever and I'm looking forward to another jackpot. The weatherman gave us a break today and we had clear, sunny weather, but it was cold. I enjoyed my walk to Broad St. on my way to work and got into work a little earlier than usual. We were supposed to work overtime this evening, but I had finished most of my work and decided I'd rather go home and get a few things done, which I did.

It could be that my boss won't  go New York after all. If they finish packing all the orders tonight, then he’ll go. He had intended to go for two days, but will only stay one day, if he does go. Looks like both Anne and I aren't going to get that gift after all. I never believe anything he says anyway - not until he hands it to me personally. When I've got it in any hands I believe it. At any rate, we shall see if he will keep his promise.

We are busier than ever these days and I'm just about managing to keep up with it. I don't mind being busy in the least, for the time flies and I like that.

Fay received ten of Morris’ letters that she had written back in November. It certainly will kill her when all the packages she sent (none of which he ever received) come back. Her little boy broke one of the bottles of perfume he sent her and she really beat him up for it. She said something in her cracked when she saw that bottle break and I can't say that I blame her. Life is so cruel sometimes. In spite of it all, I think she’s still bearing up remarkably well. She has hopes of going into business herself and I don't think it's a bad idea.

That reminds me - my mom heard of a case where a discharged G.I. tried to borrow $2,000, wanting to put up 1,000 of his own and he couldn't get it cause he didn't have sufficient security. We'll have one picnic trying to borrow money from the government without signing our lives away for it. The more we can put up, the better are our chances for a good loan, if and when we need it. That's another way that bonds will mean a lot. I can show that we have invested money and have not touched it for so long. I like bonds a lot, in spite of all you may say about our building up a large cash reserve.

I must scoot now and give your daughter and mine her bath. She's busy writing a letter to you on her blackboard, while I hurriedly finish this. It's kind of late (about 8) and I want to get her to bed by nine. She's so cute, baby, and I know how much you would enjoy her these evenings. Let's hope it will be so before another year is out. We love you, dearest daddy and we love being
Your
Eve and Adele
8 March 1945
Dearest Darling,
Your V-mail of 27 Feb. arrived this afternoon together with a nice long letter from Dot in Alexandria. Poor Snuff is certainly having his troubles. I just can’t imagine what might be causing those blood clots, but I do know that they are extremely dangerous ’cause if he gets one in the wrong place, well, I just don’t like to think about it. Hope they clear up the condition—but quick! Dottie certainly had a rough trip down, but I guess you know all about it by now.
You say you received nine of my letters on 26 Feb. I felt good, reading that, Sweet. I’ll be looking for that long letter you typed on that date. Speaking about some letters of mine that you are missing you said “I’m sure I’ll have to sweat them out.” That tickles me—the use of the G.I. expression, I mean. On you, it sounds good, baby.
“Business” in the Orderly Room is still heavy, and I had another very full day trying to keep up with it. Did I tell you I have to go to class on Wednesdays, Thursdays and Fridays for instruction in “classification.”
In the middle of the afternoon Klein stopped in to show me six of the biggest eggs I have ever seen. He got them from a farmer around here, and told me to hold on to them ’til the evening, when we would go down to the Aero Club to have them fried. I filed them in the cubby-hole reserved for “unfinished business.” Later, we walked down to the club and had one of the WVS women fry them for us. They were a real treat—no kiddin’—
And now, honey, it is almost 10 P.M., and I’m thinking seriously of hitting the sack. Which reminds me that you closed this V-mail received today with a very sweet sentiment, to wit: “Good night, dearest, pleasant dreams, and may they be of—Your Eve.” For that, my darling, I’ll make a special effort tonight to do just that! I haven’t had any luck that way for the longest time now, darn it. But I sure make up for it in the day time, ’cause then I’m thinking of you always. I adore you, Evie. A kiss for Adele—love to all from
Your
Phil
Posted by Marilyn at 10:49 AM