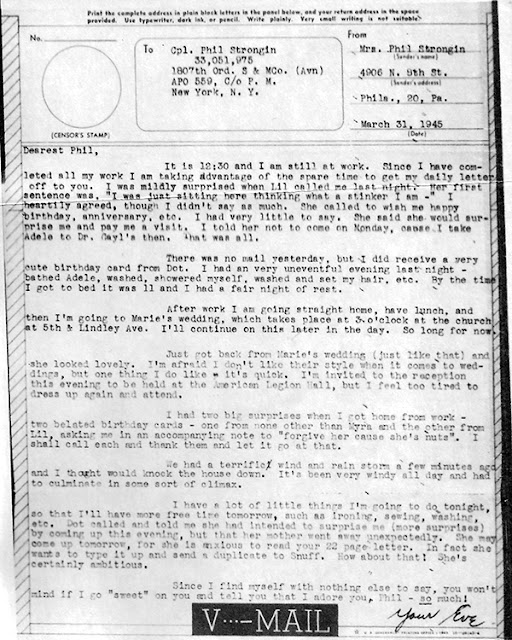 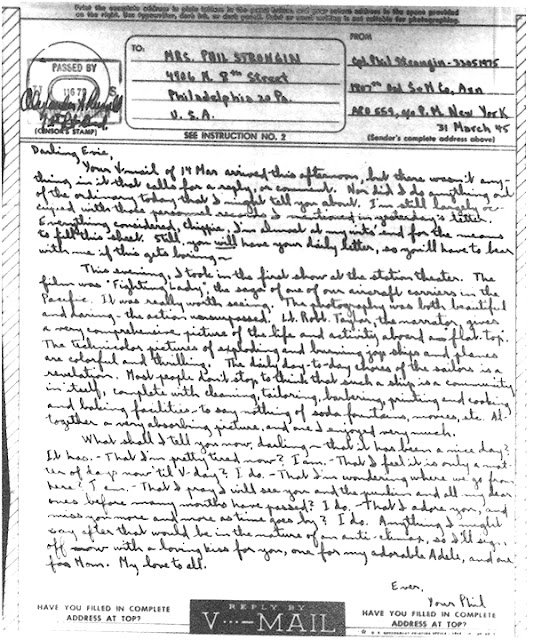 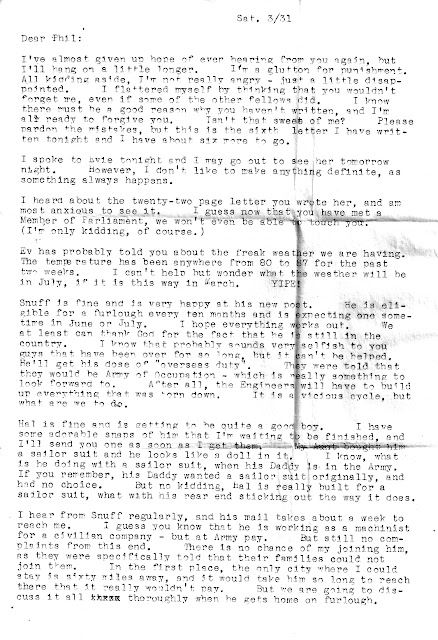 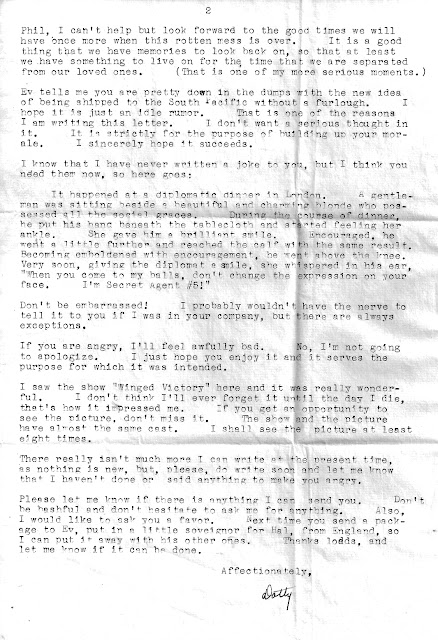 It is 12:30 and I am still at work. Since I have completed all my work I am taking advantage of the spare time to get my daily letter off to you. I was mildly surprised when Lil called me last night. Her first sentence was, "I was just sitting here thinking what a stinker I am” - I heartily agreed, though I didn't say as much. She called to wish me happy birthday, anniversary, etc. I had very little to say. She said she would surprise me and pay me a visit. I told her not to come on Monday, cause I take Adele to Dr. Gayl's then. That was all.

There was no mail yesterday, but I did receive a very cute birthday card from Dot. I had an very uneventful evening last night - bathed Adele, washed, showered myself, washed and set my hair, etc. By the time I got to bed it was 11 and I had a fair night of rest.

After work I am going straight home, have lunch, and then I'm going to Marie's wedding, which takes place at 3 o'clock at the church at 5th & Lindley Ave. I'll continue on this later in the day. So long for now.

Just got back from Marie's wedding (just like that) and she looked lovely. I'm afraid I don't like their style when it comes to weddings, but one thing I do like - it's quick. I'm invited to the reception this evening to be held at the American Legion Hall, but I feel too tired to dress up again and attend.

I had two big surprises when I got home from work - two belated birthday cards - one from none other than Myra and the other from Lil, asking me in an accompanying note to "forgive her cause she's nuts". I shall call each and thank them and let it go at that.

We had a terrific wind and rain storm a few minutes ago and I thought would knock the house down. It's been very windy all day and had to culminate in some sort of climax.

I have a lot of little things I'm going to do tonight, so that I'll have more free time tomorrow, such as ironing, sewing, washing, etc. Dot called and told me she had intended to surprise me (more surprises) by coming up this evening, but that her mother went away unexpectedly. She may come up tomorrow, for she is anxious to read your 22 page letter. In fact she wants to type it up and send a duplicate to Snuff. How about that! She's certainly ambitious.

Since I find myself with nothing else to say, you won't mind if I go "sweet" on you and tell you that I adore you, Phil - so much!
Your Eve
31 March 1945
Darling Evie,
Your V-mail of 14 Mar. arrived this afternoon, but there wasn’t anything in it that calls for a reply, or comment. Nor did I do anything out of the ordinary today that I might tell you about. I’m still largely occupied with those personnel records I mentioned in yesterday’s letter. Everything considered, Chippie, I’m almost at my wits’ end for the means to fill this sheet. Still, you will have your daily letter, so you’ll have to bear with me if this gets boring—
This evening, I took in the first show at the station theater. The film was “Fighting Lady,” the saga of one of our aircraft carriers in the Pacific. It was really worth seeing. The photography was both beautiful and daring—the action unsurpassed. Lt. Robt. Taylor, the narrator, gives a very comprehensive picture of the life and activity aboard a “flat top.” The technicolor pictures of exploding and burning jap ships and planes are colorful and thrilling. The daily day-to-day chores of the sailors is a revelation. Most people don’t stop to think that such a ship is a community in itself, complete with cleaning, tailoring, barbering, printing and cooking and baking facilities—to say nothing of soda fountains, movies, etc. Altogether a very absorbing picture, and one I enjoyed very much.
What shall I tell you now, darling—that it has been a nice day? It has.—That I’m pretty tired now? I am.—That I feel it is only a matter of days now ’til V-day? I do.—That I’m wondering where we go from here? I am.—That I pray I will see you and the punkin and all my dear ones before many months have passed? I do.—That I adore you, and miss you more and more as time goes by? I do. Anything I might say after that would be in the nature of an anti-climax, so I’ll sign off now with a loving kiss for you, one for my adorable Adele, and one for Mom. My love to all.
Ever,
Your Phil
Sat. 3/31 (1945)

I've almost given up hope of ever hearing from you again, but I'll hang on a little longer. I'm a glutton for punishment. All kidding aside, I’m not really angry - just a little disappointed. I flattered myself by thinking that you wouldn't forget me, even if some of the other fellows did. I know there must be a good reason why you haven't written, and I'm all ready to forgive you. Isn't that sweet of me? Please pardon the mistakes, but this is the sixth letter I have written tonight and I have about six more to go.

I spoke to Evie tonight and I may go out to see her tomorrow night. However, I don't like to make anything definite, as something always happens.

I heard about the twenty-two page letter you wrote her, and am most anxious to see it. I guess now that you have met a Member of Parliament, we won't even be able to touch you. (I'm only kidding, of course.)

Ev has probably told you about the freak weather we are having. The temperature has been anywhere from 80 to 87 for the past two weeks. I can't help but wonder what the weather will be in July, if it is this way in March. YIPE!

Snuff is fine and is very happy at his new post. He is eligible for a furlough every ten months and is expecting one sometime in June or July. I hope everything works out. We at least can thank God for the fact that he is still in the country. I know that probably sounds very selfish to you guys that have been over for so long, but it can't be helped. He'll get his dose of "overseas duty.” They were told that they would be Army of Occupation - which is really something to look forward to. After all, the Engineers will have to build up everything that was torn down. It is a vicious cycle, but what are we to do.

Hal is fine and is getting to be quite a good boy. I have some adorable snaps of him that I'm waiting to be finished, and I'll send you one as soon as I get them. My Aunt bought him a sailor suit and he looks like a doll in it. I know, what is he doing with a sailor suit, when his Daddy is in the Army. If you remember, his Daddy wanted a sailor suit originally, and had no choice. But no kidding, Hal is really built for a sailor suit, what with his rear end sticking out the way it does.

I hear from Snuff regularly, and his mail takes about a week to reach me. I guess you know that he is working as a machinist for a civilian company but at Army pay. But still no complaints from this end. There is no chance of my joining him, as they were specifically told that their families could not join them. In the first place, the only city where I could stay is sixty miles away, and it would take him so long to reach there that it really wouldn't pay. But we are going to discuss it all thoroughly when he gets home on furlough.

Phil, I can't help but look forward to the good times we will have once more when this rotten mess is over. It is a good thing that we have memories to look back on, so that at least we have something to live on for the time that we are separated from our loved ones. (That is one of my more serious moments.)

Ev tells me you are pretty down in the dumps with the new idea of being shipped to the South Pacific without a furlough. I hope it is just an idle rumor. That is one of the reasons I am writing this letter. I don't want a serious thought in it. It is strictly for the purpose of building up your morale. I sincerely hope it succeeds.

I know that I have never written a joke to you, but I think you need them now, so here goes:

It happened at a diplomatic dinner in London. A gentleman was sitting beside a beautiful and charming blonde who possessed all the social graces. During the course of dinner, he put his hand beneath the tablecloth and started feeling her ankle. She gave him a brilliant smile. Encouraged, he went a little further and reached the calf with the same result. Becoming emboldened with encouragement, he went above the knee. Very soon, giving the diplomat a smile, she whispered in his ear, "When you come to my balls, don't change the expression on your face, I’m Secret Agent #5!"

Don't be embarrassed! I probably wouldn't have the nerve to tell it to you if I was in your company, but there are always exceptions.

If you are angry, I'll feel awfully bad. No, I'm not going to apologize. I just hope you enjoy it and it serves the purpose for which it was intended.

I saw the show “Winged Victory" here and it was really wonderful. I don't think I'll ever forget it until the day I die, that's how it impressed me. If you get an opportunity to see the picture, don't miss it. The show and the picture have almost the same cast. I shall see the picture at least eight times.

There really isn't much more I can write at the present time, as nothing is new, but, please, do write soon and let me know that I haven't done or said anything to make you angry.

Please let me know if there is anything I can send you. Don't be bashful and don't hesitate to ask me for anything. Also, I would like to ask you a favor. Next time you send a package to Ev, put in a little soveignor for Hal, from England, so I can put it away with his other ones. Thanks loads, and let me know if it can be done.

Affectionately,
Dotty
Posted by Marilyn at 9:35 AM