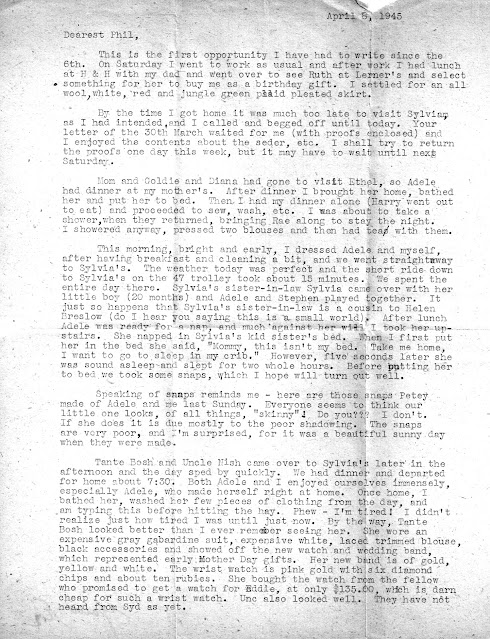 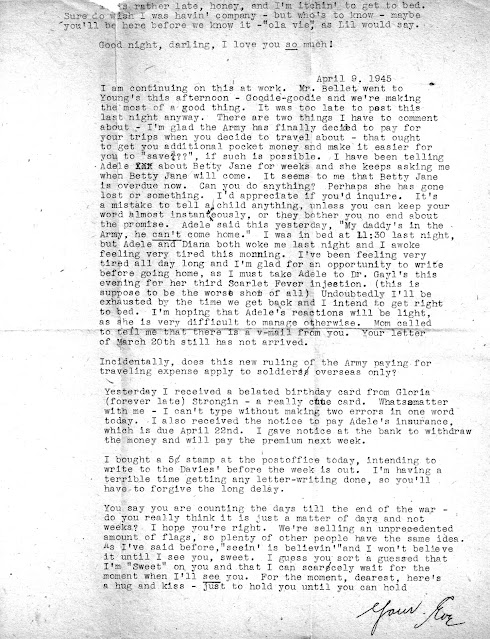 This is the first opportunity I have had to write since the 6th. On Saturday I went to work as usual and after work I had lunch at H & H with my dad and went over to see Ruth at Lerner's and select something for her to buy me as a birthday gift. I settled for an all wool, white, red and jungle green płaid pleated skirt.

By the time I got home it was much too late to visit Sylvia, as I had intended, and I called and begged off until today. Your letter of the 30th March waited for me (with proofs enclosed) and I enjoyed the contents about the seder, etc. I shall try to return the proofs one day this week, but it may have to wait until next Saturday.

Mom and Goldie and Diana had gone to visit Ethel, so Adele had dinner at my mother's. After dinner I brought her home, bathed her and put her to bed. Then I had my dinner alone (Harry went out to eat) and proceeded to sew, wash, etc. I was about to take a shower, when they returned, bringing Rae along to stay the night. I showered anyway, pressed two blouses and then had tea with them.

This morning, bright and early, I dressed Adele and myself, after having breakfast and cleaning a bit, and we went straightaway to Sylvia's. The weather today was perfect and the short ride down to Sylvia's on the 47 trolley took about 15 minutes. We spent the entire day there. Sylvia's sister-in-law Sylvia came over with her little boy (20 months) and Adele and Stephen played together. It just so happens that Sylvia's sister-in-law is a cousin to Helen Breslow (do I hear you saying this is a small world). After lunch Adele was ready for a nap, and much against her will I took her upstairs. She napped in Sylvia's kid sister's bed. When I first put her in the bed she said, "Mommy, this isn't my bed. Take me home, I want to go to sleep in my crib." However, five seconds later she was sound asleep and slept for two whole hours. Before putting her to bed we took some snaps, which I hope will turn out well.

Speaking of snaps reminds me - here are those snaps Petey made of Adele and me last Sunday. Everyone seems to think our little one looks, of all things, "skinny"! Do you??? I don't. If she does it is due mostly to the poor shadowing. The snaps are very poor, and I'm surprised, for it was a beautiful sunny day when they were made.

Tante Bosh and Uncle Nish came over to Sylvia's later in the afternoon and the day sped by quickly. We had dinner and departed for home about 7:30. Both Adele and I enjoyed ourselves immensely, especially Adele, who made herself right at home. Once home, I bathed her, washed her few pieces of clothing from the day, and am typing this before hitting the hay. Phew - I'm tired! I didn't realize just how tired I was until just now. By the way, Tante Bosh looked better than I ever remember seeing her. She wore an expensive gray gabardine suit, expensive white, laced trimmed blouse, black accessories and showed off the new watch and wedding band, which represented early Mother Day gifts. Her new band is of gold, yellow and white, The wrist watch is pink gold with six diamond chips and about ten rubies. She bought the watch from the fellow who promised to get a watch for Eddie, at only $135.00, which is darn cheap for such a wrist watch. Unc also looked well. They have not. heard from Syd as yet.
It is rather late, honey, and I'm itchin' to get to bed. Sure do wish I was havin' company - but who's to know - maybe you'll be here before we know it - "ola vie,” as Lil would say.Good night, darling, I love you so much!

April 9, 1945
I am continuing on this at work. Mr. Bellet went to Young's this afternoon - Goodie-goodie and we're making the most of a good thing. It was too late to post this last night anyway. There are two things I have to comment about - I'm glad the Army has finally decided to pay for your trips when you decide to travel about - that ought to get you additional pocket money and make it easier for you to "save???", if such is possible. I have been telling Adele about Betty Jane for weeks and she keeps asking me when Betty Jane will come. It seems to me that Betty Jane is overdue now. Can you do anything? Perhaps she has gone lost or something. I'd appreciate if you'd inquire. It's a mistake to tell a child anything, unless you can keep your word almost instantaneously, or they bother you no end about the promise. Adele said this yesterday, "My daddy's in the Army, he can't come home." I was in bed at 11:30 last night, but Adele and Diana both woke me last night and I awoke feeling very tired this morning. I've been feeling very tired all day long and I'm glad for an opportunity to write before going home, as I must take Adele to Dr. Gayl's this evening for her third Scarlet Fever injection. (this is suppose to be the worse shot of all) Undoubtedly I'll be exhausted by the time we get back and I intend to get right to bed. I'm hoping that Adele's reactions will be light, as she is very difficult to manage otherwise. Mom called to tell me that there is a v-mail from you. Your letter of March 20th still has not arrived.

Incidentally, does this new ruling of the Army paying for traveling expense apply to soldiers overseas only?

Yesterday I received a belated birthday card from Gloria (forever late) Strongin - a really cutie card. Whatsamatter with me - I can't type without making two errors in one word today. I also received the notice to pay Adele's insurance, which is due April 22nd. I gave notice at the bank to withdraw the money and will pay the premium next week.

I bought a 5¢ stamp at the postoffice today, intending to write to the Davies’ before the week is out. I'm having a terrible time getting any letter-writing done, so you'll have to forgive the long delay.

You say you are counting the days till the end of the war - do you really think it is just a matter of days and not weeks? I hope you're right. We're selling an unprecedented amount of flags, so plenty of other people have the same idea. As I've said before, "seein' is believin'"and I won't believe it until I see you, sweet. I guess you sort a guessed that I'm "Sweet" on you and that I can scarcely wait for the moment when I'll see you. For the moment, dearest, here's a hug and kiss - just to hold you until you can hold
Your Eve
Posted by Marilyn at 11:32 AM