Post #629 - April 13, 14, 1945 Was Surprised to Learn that Brother Jack Gained 20 Pounds and Whoever Thought that Roosevelt would Die before Hitler or Hirohito! and A Letter from Seymour Paller 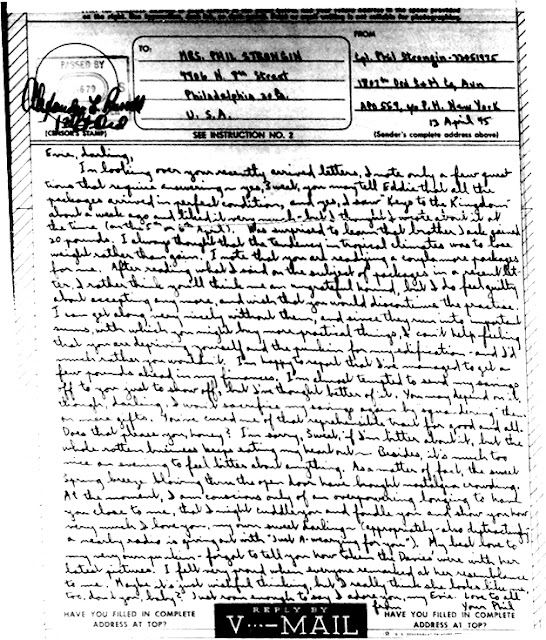 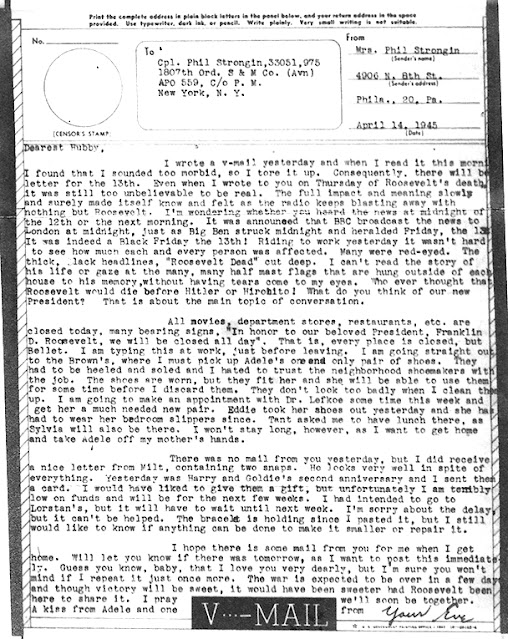 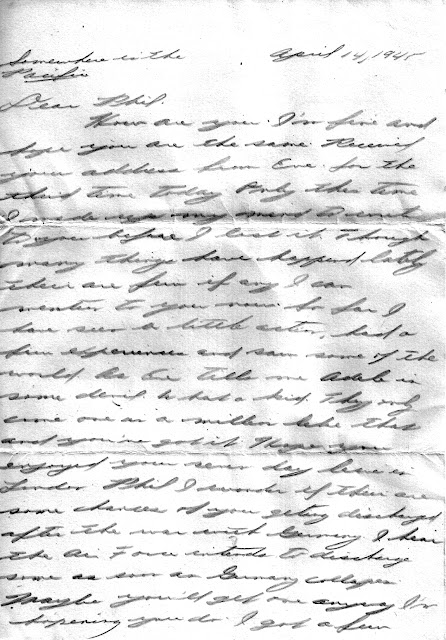 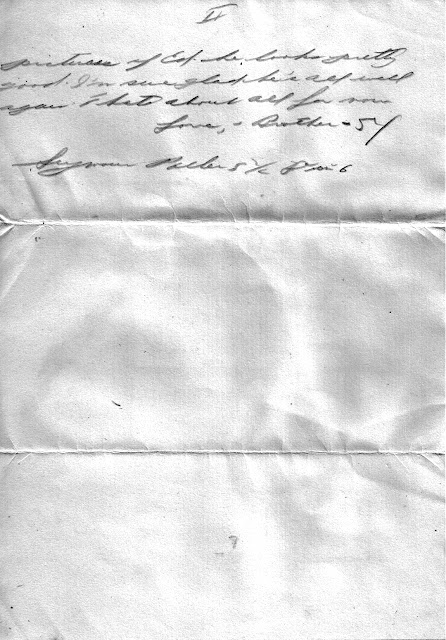 13 April 1945
Evie, darling,
In looking over your recently arrived letters, I note only a few questions that require answering—yes, Sweet, you may tell Eddie that all the packages arrived in perfect condition, and yes, I saw “Keys to the Kingdom” about a week ago and liked it very much—but I thought I wrote about it at the time (on the 5th or 6th April). Was surprised to learn that brother Jack gained 20 pounds. I always thought that the tendency in tropical climates was to lose weight rather than gain. I note that you are readying a coupla more packages for me. After reading what I said on the subject of packages in a recent letter, I rather think you’ll think me an ungrateful hound, but I do feel guilty about accepting any more, and wish that you would discontinue the practice. I can get along very nicely without them, and since they run into important sums, with which you might buy more practical things, I can’t help feeling that you are depriving yourself and the punkin for my edification—and I’d much rather you wouldn’t. I’m happy to report that I’ve managed to get a few pounds ahead in my finances. I’m almost tempted to send my savings off to you just to show off, but I’ve thought better of it. You may depend on it, though, darling, I won’t sacrifice my savings again by “squandering” them on more gifts. You’ve cured me of that reprehensible trait for good and all. Does that please  you, honey? I’m sorry, Sweet, if I’m bitter about it, but the whole rotten business keeps eating my heart out— Besides, it’s much too nice an evening to feel bitter about anything. As a matter of fact, the sweet Spring breeze blowing thru the open door have brought nostalgia crowding. At the moment, I am conscious only of an overpowering longing to have you close to me, that I might cuddle you and fondle you and show you how very much I love you, my own sweet darling— (appropriately—also distractingly—a nearby radio is giving out with “Just A-Wearying for You”). My best love to my very own punkin—forgot to tell you how taken the Davies’ were with her latest pictures. I felt very proud when everyone remarked at her resemblance to me. Maybe it’s just wishful thinking, but I really think she looks like me, too, don’t you baby? Just room enough to say I adore you, my Evie. Love to all from
Your Phil
April 14, 1945

I wrote a v-mail yesterday and when I read it this morning I found that I sounded too morbid, so I tore it up. Consequently, there will be no letter for the 13th. Even when I wrote to you on Thursday of Roosevelt's death it was still too unbelievable to be real. The full impact and meaning slowly and surely made itself known and felt as the radio keeps blasting away with nothing but Roosevelt. I'm wondering whether you heard the news at midnight of the 12th or the next morning. It was announced that BBC broadcast the news to London at midnight, just as Big Ben struck midnight and heralded Friday, the 13th! Riding to work yesterday, it wasn’t wasn't hard to see how much each and every person was affected. Many were red-eyed. The thick, black headlines, "Roosevelt Dead” cut deep. I can't read the story of his life or gaze at the many, many half mast flags that are hung outside of each house to his memory, without having tears come to my eyes. Whoever thought that Roosevelt would die before Hitler or Hirohito! What do you think of our new President? That is about the main topic of conversation.

All movies, department stores, restaurants, etc. are closed today, many bearing signs. "In honor to our beloved President, Franklin D. Roosevelt, we will be closed all day.” That is, every place is closed, but Bellet. I am typing this at work, just before leaving. I am going straight out to the Brown's, where I must pick up Adele's one and only pair of shoes. They had to be heeled and soled and I hated to trust the neighborhood shoemakers with the job. The shoes are worn, but they fit her and she will be able to use them for some time before I discard them. They don't look too badly when I clean them up. I am going to make an appointment with Dr. Lefkoe some time this week and I get her a much needed new pair. Eddie took her shoes out yesterday and she has had to wear her bedroom slippers since. Tant asked me to have lunch there, as Sylvia will also be there. I won't stay long, however, as I want to get home and take Adele off my mother's hands.

There was no mail from you yesterday, but I did receive a nice letter from Milt, containing two snaps. "He looks very well in spite of everything. Yesterday was Harry and Goldie's second anniversary and I sent them a card. I would have liked to give them a gift, but unfortunately I am terribly low on funds and will be for the next few weeks. I had intended to go to Lorstan's, but it will have to wait until next week. I'm sorry about the delay but it can't be helped. The bracelet is holding since I pasted it, but I still would like to know if anything can be done to make it smaller or repair it.

I hope there is some mail from you for me when I get home. Will let you know if there was tomorrow, as I want to post this immediately. Guess you know, baby, that I love you very dearly, but I'm sure you won't mind if I repeat it just once more. The war is expected to be over in a few days and though victory will be sweet, it would have been sweeter had Roosevelt been here to share it. I pray we'll soon be together. A kiss from Adele and one from
Your Eve
April 14, 1945
Somewhere in the Pacific
Dear Phil,
How are you. I’m fine and hope you are the same. Received your address from Eve for the third time today. Only this time I made up my mind to write to you before I lose it. Though many things have happened lately, there are few, if any, I can mention to you now. So far I have seen a little action, had a few experiences and saw some of the world. As Eve tells me, Adele is some devil. What a kid. They only come one in a million like this and you’ve got it. Hope you enjoyed your seven day leave in London. Phil, I wonder if there are some chances of you getting discharged after the war with Germany collapses. Maybe you’ll get one anyway. I’m hoping you do. I got a few pictures of Ed. He looks pretty good. I’m sure glad he’s all well again. That’s about all for now.
Love,
Brother Sy
Seymour Paller [?]
Posted by Marilyn at 12:51 PM