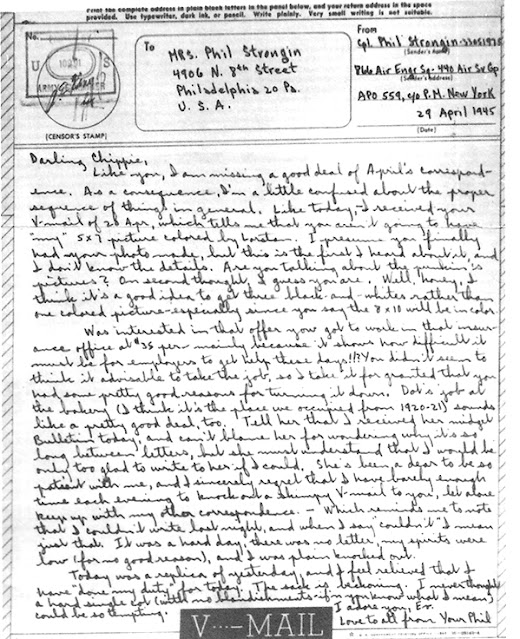 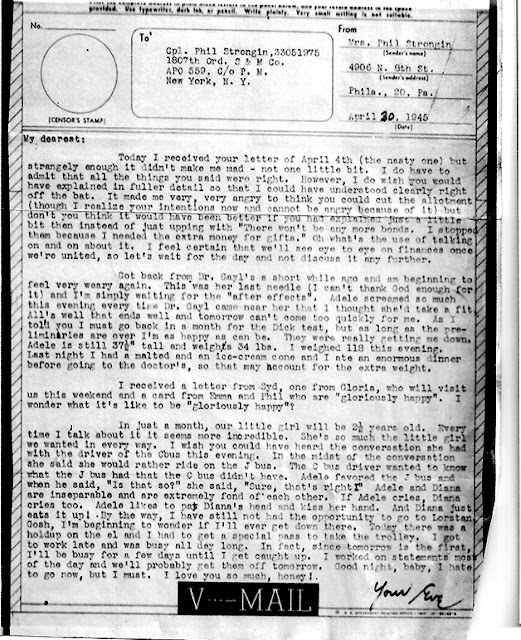 Like you, I am missing a good deal of April's correspondence. As a consequence, I am a little confused about the proper sequence of things in general. Like today,—I received your V-mail of 28 Apr, which tells me that you aren’t going to have “my” picture colored by Lorstan. I presume you finally had your photo made, but this is the first I heard about it, and I don't know the details. Are you talking about the punkin’s pictures? On second thought, I guess you are. Well, honey, I think it's a good idea to get three black-and-whites rather than one colored picture—especially since you say the 8x10 will be in color.
Was interested in that offer you got to work in that insurance office at $35 per—mainly because it shows how difficult it must be for employers to get help these days!!? You didn't seem to think it advisable to take the job, so I take it for granted that you had some pretty good reasons for turning it down. Dot’s job at the bakery (I think it’s the place we occupied from 1920-21) sounds like a pretty good deal, too. Tell her that I received her midget Bulletin today, and can’t blame her for wondering why it’s so long between letters, but she must understand that I would be only too glad to write to her if I could. She's been a dear to be so patient with me, and I sincerely regret that I have barely enough time each evening to knock out a skimpy V-mail to you, let alone keep up with my other correspondence.—Which reminds me to note that I couldn't write last night, and when I say I “couldn't” I mean just that. It was a hard day, there was no letter, my spirits were low (for no good reason), and I was plain knocked out.

Today was a replica of yesterday, and I feel relieved that I have “done my duty” for today. The sack is beckoning. I never thought a hard single cot (with no blandishments—if’n you know what I mean) could be so tempting. I adore you, Ev.
Love to all from
Your Phil
April 30, 1945
My dearest:

Today I received your letter of April 4th (the nasty one) but strangely enough it didn't make me mad - not one little bit. I do have to admit that all the things you said were right. However, I do wish you would have explained in fuller detail so that I could have understood clearly right off the bat. It made me very, very angry to think you could cut the allotment (though I realize your intentions now and cannot be angry because of it) but don't you think it would have been better if you had explained just a little bit then instead of just upping with "There won't be any more bonds. I stopped them because I needed the extra money for gifts." Oh what's the use of talking on and on about it. I feel certain that we'll see eye to eye on finances once we're united, so let's wait for the day and not discuss it any further.

Got back from Dr. Gayl's a short while ago and am beginning to feel very weary again. This was her last needle (I can't thank God enough for It) and I'm simply waiting for the "after effects". Adele screamed so much this evening every time Dr. Gayl came near her that I thought she'd take a fit. All's well that ends well and tomorrow can't come too quickly for me. As I told you I must go back in a month for the Dick test, but as long as the preliminaries are over I'm as happy as can be. They were really getting me down. Adele is still 37-1/2" tall and weights 34 lbs. I weighed 118 this evening. Last night I had a malted and an ice-cream cone and I ate an enormous dinner before going to the doctor's, so that may account for the extra weight.

In just a month, our little girl will be 2-1/2 years old. Every time I talk about it it seems more Incredible. She's so much the little girl we wanted in every way. I wish you could have heard the conversation she had with the driver of the C bus this evening. In the midst of the conversation she said she would rather ride on the J bus. The C bus driver wanted to now what the J bus had that the C bus didn't have. Adele favored the J bus and when he said, "Is that so?" she said, "Sure, that's right!” Adele and Diana are inseparable and are extremely fond of each other. If Adele cries, Diana cries too. Adele likes to pat Diana's head and kiss her hand. And Diana just eats it up! By the way, I have still not had the opportunity to go to Lorstan. Gosh, I'm beginning to wonder if I'll ever get down there. Today there was a holdup on the el and I had to get a special pass to take the trolley. I got to work late and was busy all day long. In fact, since tomorrow is the first, I'll be busy for a few days until I get caught up. I worked on statements most of the day and we'll probably get them off tomorrow. Good night, baby, I hate to go now, but I must. I love you so much, honey!
Your Eve
Posted by Marilyn at 2:34 PM