Post #641 - May 1, 2, 1945 I’m Looking Forward to Playing Pinochle with Uncle Nish, the Limeys and Harry Once Again and The End of the War in Europe is Beginning to Drag and I'll Be Mighty Happy When the Official News Comes Through 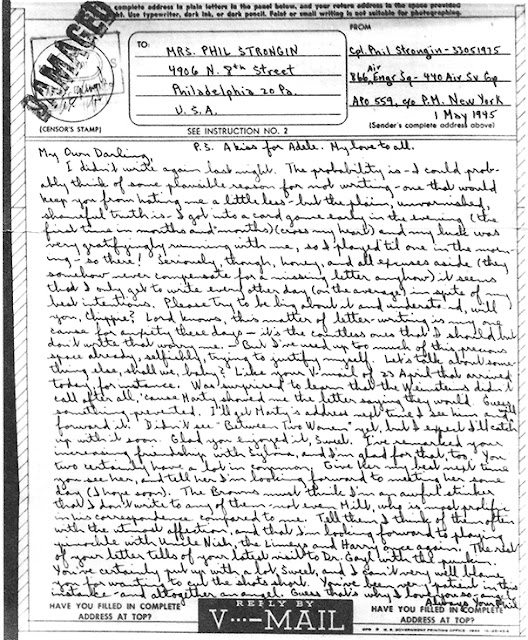 I didn’t write again last night. The probability is—I could probably think of some plausible reason for not writing - one that would keep you from hating me a little less - but the plain, unvarnished, shameful truth is - I got into a card game early in the evening (the first time in months and months) (cross my heart) and my luck was very gratifyingly running with me, so I played ’til one in the morning - so there! Seriously, though, honey, and all excuses aside (they somehow never compensate for a missing letter anyhow) it seems that I only get to write every other day (on the average) in spite of my best intentions. Please try to be big about it and understand, will you, Chippie? Lord knows, this matter of letter-writing is my one cause for anxiety these days—it’s the countless ones that I should, but don’t write that worry me.—But I’ve used up too much of the space already, selfishly, trying to justify myself. Let’s talk about something else, shall we, baby? Like your V-mail of 23 April that arrived today, for instance. Was surprised to learn the the Weinsteins did call after all, ’cause Marty showed me the letter saying they would. Guess something prevented. I'll get Marty's address next time I see him and forward it! Didn’t see “Between Two Women” yet, but I expect I'll catch up with it soon. Glad you enjoyed it, Sweet. I’ve remarked your increasing friendship with Sylvia, and I’m glad for that, too. You two certainly have a lot in common. Give her my best next time you see her, and tell her I’m looking forward to meeting her someday (I hope soon). The Browns must think I’m an awful stinker that I don't write to any of them—not even Milt, who is most prolific in his correspondence compared to me. Tell them I think of them often with the utmost affection, and that I’m looking forward to playing pinochle with Uncle Nish, the Limeys and Harry once again. The rest of your letter tells of your latest visit to Dr. Gayl with the punkin. You’ve certainly put up with a lot, Sweet, and I can’t very well blame you for wanting to cut the shots short. You’ve been very patient in this instance—and altogether an angel. Guess that’s why I love you so—angel.
Always,
Your Phil
P.S. A kiss for Adele. My love to all.

Much as I wanted to, I had not the time to get even a v-mail off to you yesterday. I had a very full day at work, and before I got Adele to bed, ironed my clothes and helped my dad fill in an application to obtain a job as an insurance salesman, it was 12:30 and I was half dead. So, I did the only logical thing - I went straight to bed.

The month of May was ushered in by strong winds, driving rain and bitter cold. Today, however, was much nicer, though it is still cold. Monday evening, after I posted your v-mail, Adele woke, vomit for all she was worth and went back to sleep. She slept peacefully the rest of the night and there is no need to tell you how grateful I was for that. There was no mail for me yesterday, but today I received your letter of April 24 and v-mails of April 25 and 26, along with my check. Your letters contained very little to comment about, so I'll just say how sweet they were and give you big hug and kiss for writing so often.

Jack N.'s aunt, Sonya, was in Philadelphia yesterday and called Mom. Jack's letter had given us all the impression that no one knew of his marriage, but we were wrong. They all know and heartily disapprove, although they say it's his life to do with as he sees fit. Sonya said that her parents disapproved strongly, but Marjorie gave them no choice, saying that she would marry Jack regardless of whether or not they accepted him, and they did. Sonya said Marge is tall (taller than Jack), very thin, blondish and very “shicksa" looking, but nevertheless very intelligent. Marge makes $60 per week and hasn't a cent to her name. Jack bought her a lovely wedding band for $80 and they had to honeymoon at Sammy & Ann's because they had no money for a honeymoon. In fact, Sonya said, Sammy had to make a loan of $200 for them so that they could get back to their various Jobs. Sonya also said that Marge's dad is a $7000 a year man, pretty well to do, but she doubted if he would do anything for them. That, dear, is the picture painted by Sonya. Jack and Marge were married on April 13, the same date that Harry and Goldie chose to call their anniversary.

In the meantime we learned that Jennie Zaslow is going to marry her brother-in-law's brother. Dave’s brother is being discharged from the Army and he and Jennie will be married June 10. Jen doesn't want a large wedding and they will have a small affair. So it is that two sisters marry two brothers.

By the way, that coat Mom is wearing in the snapshot you like so well is the one she bought from Mrs. Frommer. We had larger duplicates made and Rae also appeared, so you got gyped. No, I'm not going to Lorstan to have my picture made. When Glo comes this weekend we're going to have family pictures made in the house by the fellow who took that picture of Adele writing on her blackboard. I have yet to find the opportunity to get to Lorstan to have Adele's pictures made. Phil, I'd like to know if you are doing the same work at headquarters and whether the change will effect your status in any way.

First Mussolini and now Hitler, though I'm inclined to doubt the latter. The end of the war in Europe is beginning to drag and I'll be mighty happy when the official news comes through. Do you think, sweet, that you have a chance to get a furlough now (is that what you mean by some of your hints?) No more space, so will close now, baby, with oceans of love.
Your Eve
Posted by Marilyn at 7:39 AM