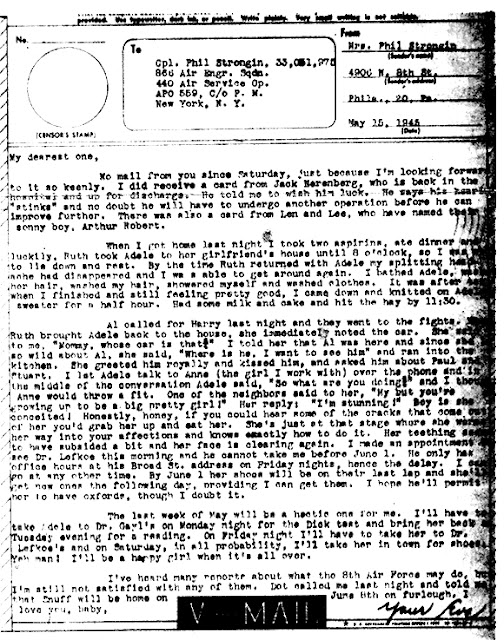 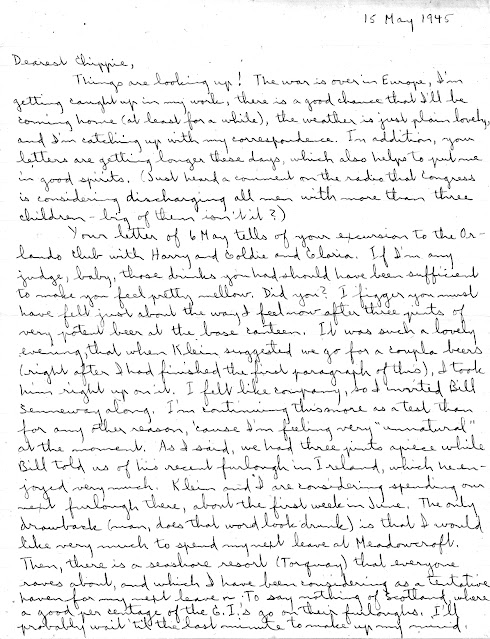 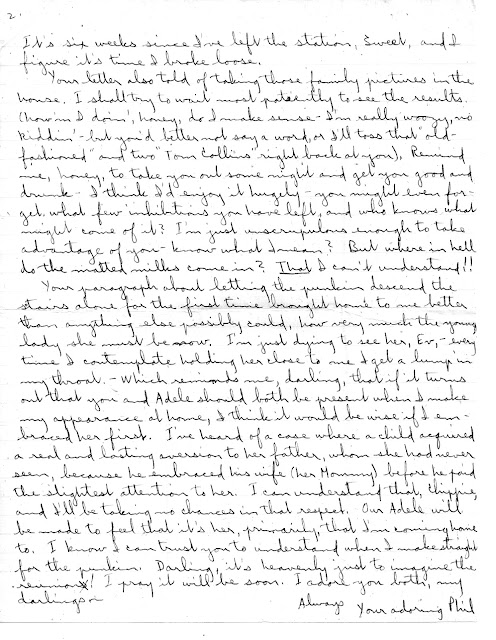 No mail from you since Saturday, just because I'm looking forward to it so keenly. I did receive a card from Jack Nerenberg, who is back in the hospital and up for discharge. He told me to wish him luck. He says his hearing “stinks” and no doubt he will have to undergo another operation before he can improve further. There was also a card from Len and Lee, who have named their sonny boy, Arthur Robert.

When I got home last night I took two aspirins, ate dinner and luckily, Ruth took Adele to her girlfriend's house until 8 o'clock, so I was able to lie down and rest. By the time Ruth returned with Adele my splitting headache had disappeared and I was able to get around again. I bathed Adele, washed her hair, washed my hair, showered myself and washed clothes. It was after 10 when I finished and still feeling pretty good, I came down and knitted on Adele’s sweater for a half hour. Had some milk and cake and hit the hay by 11:30.

Al called for Harry last night and they went to the fights. When Ruth brought Adele back to the house, she immediately noticed the car. She said to me, "Mommy, whose car is that?” I told her that Al was here and since she is so wild about Al, she said, "Where is he? I want to see him” and ran into the kitchen. She greeted him royally and kissed him, and asked him about Paul and Stuart. I let Adele talk to Anne (the girl I work with) over the phone and in the middle of the conversation Adele said. "So what are you doing?” and I thought Anne would throw a fit. One of the neighbors said to her. "My but you're growing up to be a big pretty girl!” Her reply: "I'm stunning!" Boy is she conceited! Honestly, honey, if you could hear some of the cracks that come out of her you'd grab her up and eat her. She's just at that stage where she worms her way into your affections and knows exactly how to do it. Her teething seems to have subsided a bit and her face is clearing again. I made an appointment to see Dr. Lefkoe this morning and he cannot take me before June 1. He only has office hours at the Broad St. address on Friday nights, hence the delay. I can’t go at any other time. By June 1 her shoes will be on their last lap and she’ll get new ones the following day, providing I can get them. I hope he'll permit her to have oxfords, though I doubt it.

The last week of May will be a hectic one for me. I’ll have to take Adele to Dr, Gayl’s on Monday night for the Dick test and bring her back on Tuesday evening for a reading. On Friday night I’ll have to take her to Dr. Lefkoe's, and on Saturday, in all probability, I'll take her in town for shoes. Yeh man! I’ll be a happy girl when it's all over.

I’ve heard many reports about what the 8th Air Force may do, but I'm still not satisfied with any of them. Dot called me last night and told me that Snuff will be home on June 8th on furlough. I love you, baby.
Your Eve
15 May 1945

Things are looking up! The war is over in Europe, I'm getting caught up in my work, there is a good chance that I'll be coming home (at least for a while), the weather is just plain lovely, and I'm catching up with my correspondence. In addition, your letters are getting longer these days, which also helps to put me in good spirits. (Just heard a comment on the radio that Congress is considering discharging all men with more than three children—big of them isn't it?)

Your letter of 6 May tells of your excursion to the Orlando Club with Harry and Goldie and Gloria. If I'm any judge, baby, those drinks you had should have been sufficient to make you feel pretty mellow. Did you? I figger you must have felt just about the way I feel now after three pints of very potent beer at the base canteen. It was such a lovely evening, that when Klein suggested we go for a coupla beers (right after I had finished the first paragraph of this), I took him right up on it. I felt like company, so I invited Bill Senneway along. I'm continuing this more as a test than for any other reason, ’cause I'm feeling very “unnatural” at the moment. As I said, we had three pints apiece while Bill told us of his recent furlough in Ireland, which he enjoyed very much. Klein and I are considering spending our next furlough there, about the first week in June. The only drawback (man, does that word look drunk) is that I would like very much to spend my next leave at Meadowcroft. Then, there is a seashore resort (Torquay) that everyone raves about, and which I have been considering as a tentative haven for my next leave—; To say nothing of Scotland, where a good percentage of the G.I.’s go on their furloughs. I’ll probably wait ’til the last minute to make up my mind. It's six weeks since we left the station, Sweet, and I figure it's time I broke loose.

Your letter also told of taking those family pictures in the house. I shall try to wait most patiently to see the results (how’m I doin', honey, do I make sense-—I’m really woozy, no kiddin'—but you'd better not say a word, or I'll toss that “old fashioned" and two “Tom Collins" right back at you), Remind me, honey, to take you out some night and get you good and drunk—I think I’d enjoy it hugely—you might even forget what few inhibitions you have left, and who knows what might come of it? I'm just unscrupulous enough to take advantage of you—know what mean? But where in hell do the malted milks come in? That I can't understand!!

Your paragraph about letting the punkin descend the stairs alone for the first time brought home to me to me better than anything else possibly could, how very much the young lady she must be now. I'm just dying to see her, Ev. Every time I contemplate holding her close to me I get a lump in my throat.— Which reminds me, darling, that if it turns out that you and Adele should both be present when I make my appearance at home, I think it would be wise if I embraced her first. I've heard of a case where a child acquired a real and lasting aversion to her father, whom she had never seen, because he embraced his wife (her Mommy) before he paid the slightest attention to her. I can understand that, Chippie, and I'll be taking no chances in that respect. Our Adele will be made to feel that it's her, primarily, that I’m coming home to. I know I can trust you to understand when I make straight for the punkin. Darling, it’s heavenly just to imagine the reunion! I pray it will be soon. I adore you both, my darlings—

Always
Your adoring Phil
Posted by Marilyn at 5:26 PM