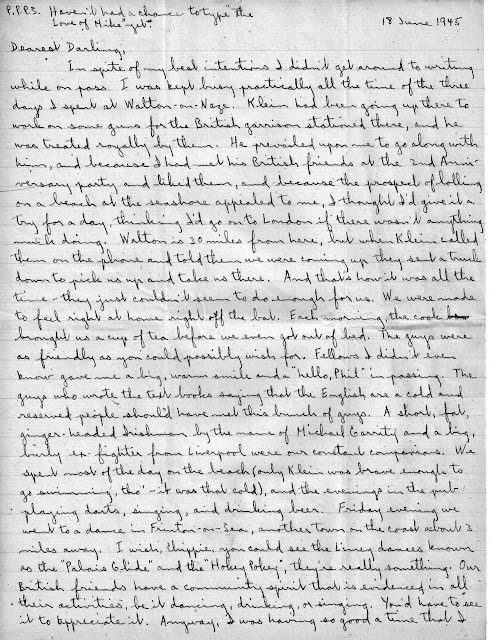 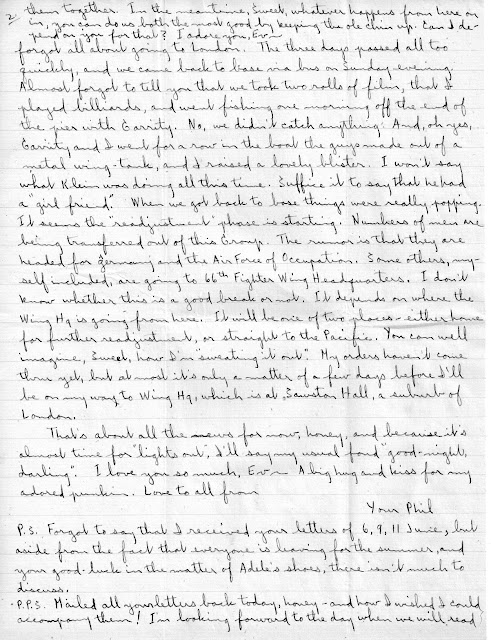 In spite of my best intentions I didn't get around to writing while on pass. I was kept busy practically all the time of the three days I spent at Walton-on-Naze. Klein had been going up work on some guns for the British garrison stationed there, and he was treated royally by them. He prevailed upon me to go along with him, and because I had met his British friends at the 2nd Anniversary party and liked them, and because the prospect of lolling on a beach at the seashore appealed to me, I thought I'd give it a try for a day, thinking I’d go on to London if there wasn't anything much doing! Walton is 30 miles from here, but when Klein called them on the phone and told them we were coming up they sent a truck down to pick us up and take us there. And that's how it was all the time - they just couldn't seem to do enough for us. We were made to feel right at home right off the bat. Each morning, the cook brought us a cup of tea before we even got out of bed. The guys were as friendly as you could possibly wish for. Fellows I didn't even know gave me a big, warm smile and a "hello, Phil" in passing. The guys who wrote the text books saying that the English are a cold and reserved people should have met this bunch of guys. A short, fat, ginger-headed Irishman by the name of Michael Garrity and a big, burly fighter from Liverpool were our constant companions. We spent most of the day on the beach (only Klein was brave enough to go swimming, tho’ - it was that cold), and the evenings in the pub playing darts, singing, and drinking beer. Friday evening we went to a dance in Frinton-on-Sea, another town on the coast about 3 miles away. I wish, Chippie, you could see the Limey dances known as the "Palais Glide" and the "Hokey Pokey", they're really something. Our British friends have a community spirit that is evidenced in all their activities, be it dancing, drinking, or singing. You'd have to see it to appreciate it. Anyway, I was having so good a time that I forgot all about going to London. The three days passed all too quickly, and we came back to base via bus on Sunday evening. Almost forgot to tell you that we took two rolls of film, that I played billiards, and went fishing one morning off the end of the pier with Garrity. No, we didn’t catch anything. And, oh yes, Garrity and I went for a row in the boat the guys made out of a metal wing-tank, and I raised a lovely blister. I won't say what Klein was doing all this time. Suffice it to say that he had a “girl friend.” When we got back to base things were really popping. It seems the "readjustment” phase is starting. Numbers of men are being transferred out of this Group. The rumor is that they are headed for Germany and the Air Force of Occupation. Some others, myself included, are going to 66th Fighter Wing Headquarters. I don't know whether this is a good break or not. It depends on where the Wing Hq is going from here. It will be one of two places - either home for further readjustment, or straight to the Pacific. You can well imagine, Sweet, how I'm “sweating it out". My orders haven't come thru yet, but at most it's only a matter of a few days before I'll be on my way to Wing Hq, which is at Sawston Hall, a suburb of London.

That's about all the news for now, honey, and because it is almost time for lights out, I'll say my usual fond "good-night, darling". I love you so much, Ev—A big hug and kiss for my adored punkin. Love to all from

P.S. Forgot to say that I received your letters of 6, 9, 11 June, but aside from the fact that everyone is leaving for the summer, and your good luck in the matter of Adele's shoes, there isn't much to discuss.
P.P.S. Mailed all your letters back today, honey - and how I wished I could accompany them! I'm looking forward to the day when we will read them together. In the meantime, Sweet, whatever happens from here on in, you can do us both the most good by keeping the ole chin up. Can I depend on you for that? I adore you, Eve
P.P.P.S. Haven't had a chance to type "The Love of Mike" yet.
Posted by Marilyn at 4:35 PM