Post #672 - June 11, 1945 Tony Was Almost Killed Just Before Getting a Furlough from Germany to England and I Never Had More Cause for Optimism Than I Have at Present 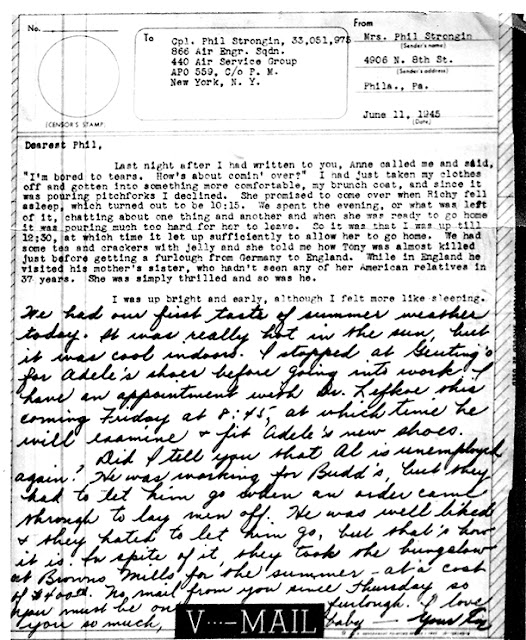 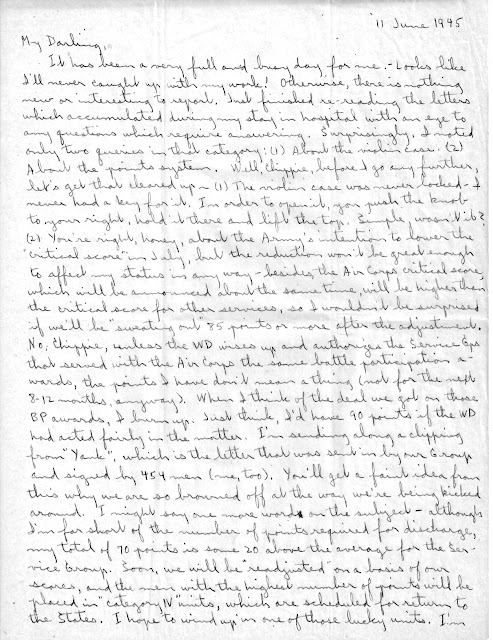 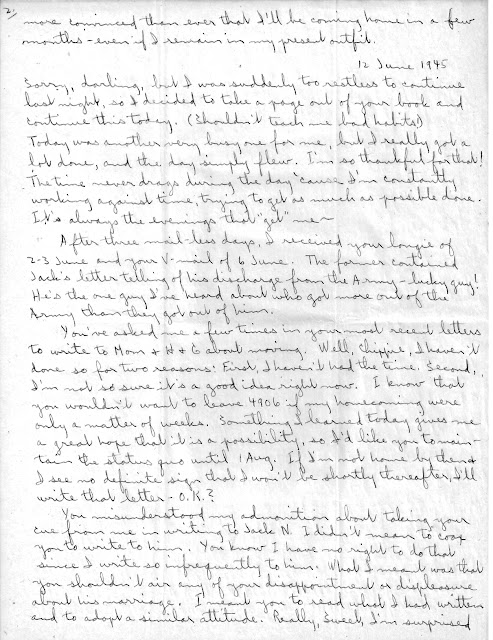 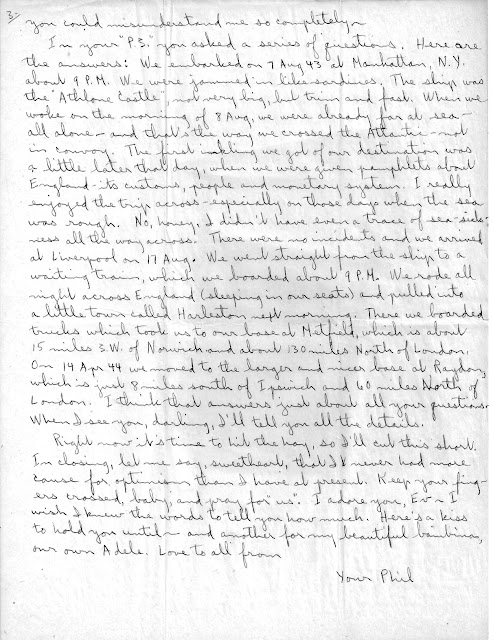 Last night after I had written to you, Anne called me and said, "I'm bored to tears. How's about comin' over?" I had just taken my clothes off and gotten into something more comfortable, my brunch coat, and since it was pouring pitchforks I declined. She promised to come over when Richy fell asleep, which turned out to be 10:15. We spent the evening, or what was left of it, chatting about one thing and another and when she was ready to go home it was pouring much too hard for her to leave. So it was that I was up till 12;30, at which time it let up sufficiently to allow her to go home. We had some tea and crackers with jelly and she told me how Tony was almost killed just before getting a furlough from Germany to England. While in England he visited his mother's sister, who hadn't seen any of her American relatives in 37 years. She was simply thrilled and so was he.

I was up bright and early, although I felt more like sleeping. We had our first taste of summer weather today. It was really hot in the sun, but it was cool indoors. I stopped at Geuting’s for Adele's shoes before going into work. I have an appointment with Dr. Lefkoe this coming Friday at 8:45; at which time he will examine & fit Adele's new shoes.

Did I tell you that Al is unemployed again. He was working for Budd's, but they had to let him go when an order came through to lay men off. He was well liked & they hated to let him go, but that's how it is. In spite of it, they took the bungalow at Browns Mills for the summer - at a cost of $400.00. No mail from you since Thursday so you must be on furlough. I love you so much, baby.—
Your Eve

It has been a very full and busy day for me. - Looks like I’ll never get caught up with my work! Otherwise, there is nothing new or interesting to report. Just finished re-reading the letters which accumulated during my stay in hospital with an eye to any questions which require answering. Surprisingly, I noted only two queries in that category: (1) About the violin case. (2) About the points system. Well, Chippie, before I go any further, let's get that cleared up - (1) The violin case was never locked - I never had a key for it. In order to open it, you push the knob to your right, hold it there and lift the top. Simple, wasn’t it? (2) You're right, honey, about the Army's intention to lower the “critical score” in July, but the reductions won't be great enough to affect my status in any way - besides, the Air Corps critical score, which will be announced about the same time, will be higher than the critical score for other services, so I wouldn't be surprised if we'll be "sweating out” 85 points or more after the adjustment. No, Chippie, unless the WD wises up and authorizes the Service Gps that served with the Air Corps the same battle participation awards, the points I have don't mean a thing (not for the next 8-12 months, anyway). When I think of the deal we got on those BP awards, I burn up. Just think, I'd have 90 points if the WD had acted fairly in the matter. I'm sending along a clipping from" Yank", which is the letter that was sent in by our Group and signed by 454 men (me, too). You'll get a faint idea from this why we are so browned off at the way we're being kicked around. I might say one more word on the subject - although I'm far short of the number of points required for discharge, my total of 70 points is some 20 above the average for the Service Group. Soon, we will be readjusted on a basis of our scores, and the men with the highest number of points will be placed in “category IV” units, which are scheduled for return to the States. I hope to wind up in one of those lucky units. I'm more convinced than ever that I'll be coming home in a few months - even if I remain in my present outfit.12 June 1945

Sorry, darling, but I was suddenly too restless to continue last night, so I decided to take a page out of your book and continue this today. (Shouldn't teach me bad habits!) Today was another very busy one for me, but I really got a lot done, and the day simply flew. I'm so thankful for that! The time never drags during the day ’cause I'm constantly working against time, trying to get as much as possible done. It's always the evenings that “get” me—

After three mail-less days, I received your longie of 2-3 June and your V-mail of 6 June. The former contained Jack's letter telling of his discharge from the Army - lucky guy! He's the one guy I've heard about who got more out of the Army than they got out of him.
You've asked me a few times in your most recent letters to write to Mom & H + G about moving. Well, Chippie, I haven't done so for two reasons: First, I haven't had the time. Second, I'm not so sure it's a good idea right now. I know that you wouldn't want to leave 4906 if my homecoming were only a matter of weeks. Something I learned today gives me a great hope that it is a possibility, so I'd like you to maintain the status quo until 1 Aug. If I'm not home by then & I see no definite sign that I won't be shortly thereafter, I'll write that letter - O.K.?

You misunderstood my admonition about taking your cue from me in writing to Jack N. I didn’t mean to coax you to write to him. You know I have no right to do that since I write so infrequently to him. What I meant was that you shouldn't air any of your disappointment or displeasure about his marriage. I meant you to read what I had written and to adopt a similar attitude. Really, Sweet, I'm surprised you could misunderstand me so completely—
In your “P.S.” you asked a series of questions. Here are the answers: We embarked on 7 Aug 43 at Manhattan, N.Y. about 9 P.M. We were jammed in like sardines. The ship was the “Athlone Castle", not very big, but trim and fast. When we woke on the morning of 8 Aug., we were already far at sea—all alone—and that's the way we crossed the Atlantic - not in convoy. The first inkling we got of our destination was a little later that day, when we were given pamphlets about England - its customs, people and monetary system. I really enjoyed the trip across on those days when the sea was rough. No, honey, I didn't have even a trace of sea-sickness all the way across. There were no incidents and we arrived at Liverpool on 17 Aug. We went straight from the ship to a waiting train, which we boarded about 9 P.M. We rode all night across England (sleeping in our seats) and pulled into a little town called Harleston next morning. There we boarded trucks which took us to our base at Metfield, which is about 15 miles S.W. of Norwich and about 130 miles North of London. On 14 Apr. 44 we moved to the larger and nicer base at Raydon, which is just 8 miles south of Ipswich and 60 miles North of London. I think that answers just about all your questions. When I see you, darling, I'll tell you all the details.

Right now it's time to hit the hay, so I'll cut this short. In closing, let me say, sweetheart, that I never had more cause for optimism than I have at present. Keep your fingers crossed, baby, and pray for “us.” I adore you, Ev - I wish I knew the words to tell you how much. Here's a kiss to hold you until ~ and another for my beautiful bambina, our own Adele. Love to all from