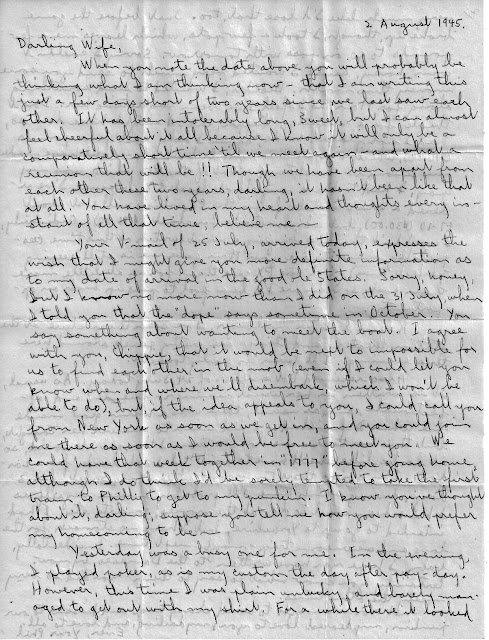 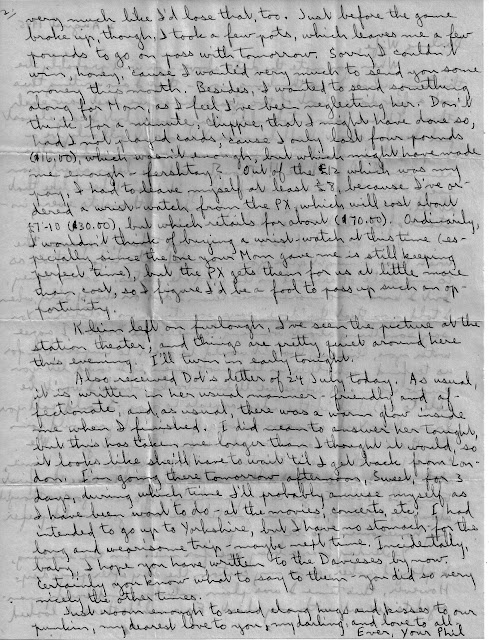 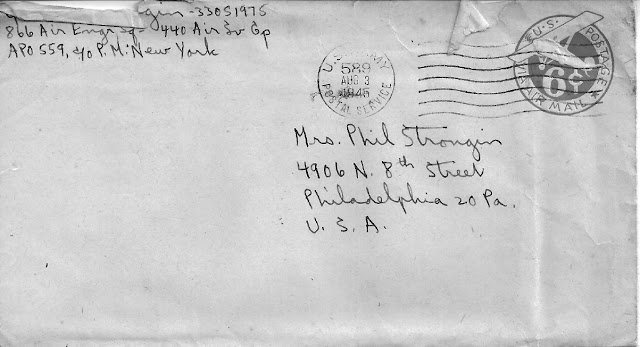 When you note the date above you will probably be thinking what I am thinking now —that I am writing this just a few days short of two years since we last saw each other. It has been intolerably long, Sweet, but I can almost feel cheerful about it all because I know it will only be a comparatively short time 'til we meet again—and what a reunion that will be!! Though we have been apart from each other these two years, darling, it hasn't been like that at all. You have lived in my heart and thoughts every instant of all that time, believe me—
Your V-mail of 25 July, arrived today, expresses the wish that I might give you more definite information as to my date of arrival in the good ole States. Sorry, honey, but I know no more now than I did on the 31 July, when I told you that the "dope" says sometime in October. You say something about wanting to meet the boat. I agree with you, Chippie, that it would be next to impossible for us to find each other in the mob (even if I could let you know when and where we'll disembark, which I won't be able to do), but, if the idea appeals to you, I could call you from New York as soon as we get in, and you could join me there as soon as I would be free to meet you. We could have that week together in “1777" before going home, although I do think I'd be sorely tempted to take the first train to Philly to get to my punkin. I know you've thought about it, darling; suppose you tell me how your would prefer my homecoming to be—

Yesterday was busy one for me. In the evening, I played poker, as is my custom the day after pay-day. However, this time I was plain unlucky, and barely managed to get out with my shirt. For a while there it looked very much like I'd lose that, too. Just before the game broke up, though, I took a few pots, which leaves me a few pounds to go on pass with tomorrow, Sorry I couldn't win, honey, 'cause I wanted
very much to send you some money this month. Besides, I wanted to send something along for Mom, as I feel I've been neglecting her. Don’t think for a minute, Chippie, that I might have done so, had I not played cards, 'cause I only lost four pounds ($16.00), which wasn't enough, but which might have made me enough -fershtay? [understand?] Out of the £12 which was my pay, I had to leave myself at least £8, because I've ordered a wrist-watch from the PX, which will cost about £7-10 ($30.00), but which retails for about ($70.00). Ordinarily, I wouldn't think of buying a wrist-watch at this time (especially since the one your Mom gave me is still
keeping perfect time), but the PX gets them for us at little more than cost, so I figured I’d be a fool to pass up such an opportunity.
Klein left on furlough, I've seen the picture at the station theater, and things are pretty quiet around here this evening. I'll turn in early tonight.

Also received Dot's letter of 24 July today. As usual, it is written in her usual manner—friendly and affectionate, and, as usual, there was a warm glow inside me when I finished. I did mean to answer her tonight, but this has taken me longer than I thought it would, so it looks like she'll have to wait 'til I get back from London. I'm going there tomorrow afternoon, Sweet, for 3 days, during which time I'll probably amuse myself as I have been wont to do—at the movies, concerts, etc. I had intended to go up to Yorkshire, but I have no stomach for the long and wearisome trip - maybe next time. Incidentally, baby, I hope you have written to the Davieses by now. Certainly you know what to say to them - you did so very nicely the other times.
Just room enough to send along hugs and kisses to our punkin, my dearest love to you, my darling, and love to all.
Ever,
Your Phil
Posted by Marilyn at 8:15 AM