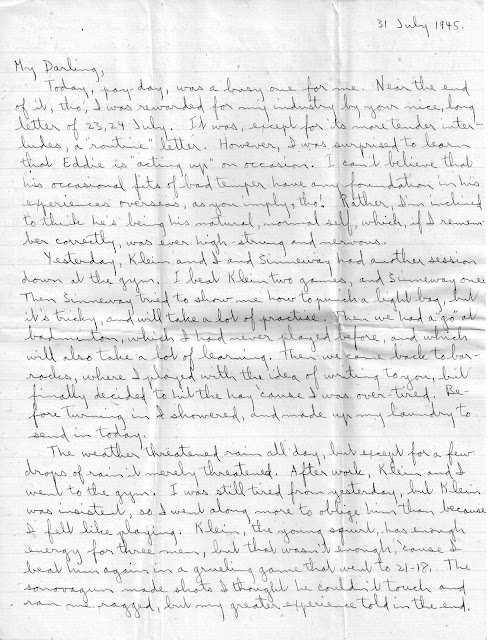 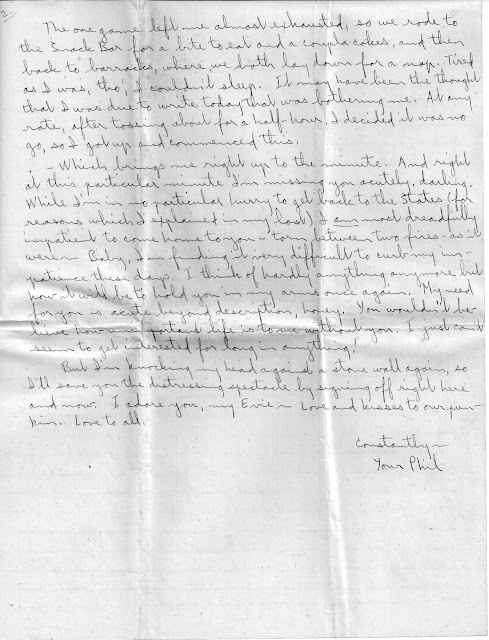 Today, pay-day, was a busy one for me. Near the end of it, tho’, I was rewarded for my industry by your nice, long letter of 23, 24 July. It was, except for its more tender interludes, a “routine" letter. However, I was surprised to learn that Eddie is “acting up" on occasion. I can't believe that his occasional fits of bad temper have any foundation in his experiences overseas, as you imply, tho’! Rather, I'm inclined to think he's being his natural, normal self, which, if I remember correctly, was ever high-strung and nervous.

Yesterday, Klein and I and Sinneway had another session down at the gym. I beat Klein two games, and Sinneway one. Then Sinneway tried to show me how to punch a light bag, but it's tricky, and will take a lot of practise. Then we had a “go" at badminton, which I had never played before, and which will also take a lot of learning. Then we come back to barracks, where I played with the idea of writing to you, but finally decided to hit the hay ’cause I was over-tired. Before turning in I showered, and made up my laundry to send in today.

The weather threatened rain all day, but except for a few drops of rain it merely threatened. After work, Klein and I went to the gym. I was still tired from yesterday, but Klein was insistent, so I went along more to oblige him than because I felt like playing. Klein, the young squirt, has enough energy for three men, but that wasn't enough, ’cause I beat him again in a grueling game that went to 21-18, The sonovagun made shots I thought he couldn't touch and ran me ragged, but my greater experience told in the end.

The one game left me almost exhausted, so we rode to the Snack Bar for a bite to eat and a coupla cakes, and then back to barracks, where, we both lay down for a nap. Tired as I was tho’, I couldn't sleep. It may have been the thought that I was due to write today that was bothering me. At any rate, after tossing about for a half-hour, I decided it was no go, so I got up and commenced this.

—Which brings me right up to the minute. And right at this particular minute I'm missing you acutely, darling. While I'm in no particular hurry to get back to the States (for reasons which I explained in my last) I am most dreadfully impatient to come home to you - torn between two fires - as it were— Baby, I'm finding it very difficult to curb my impatience these days. I think of hardly anything anymore but how it will be to hold you in my arms once again. My need for you is acute beyond description, honey. You wouldn't believe how unimportant life is to me without you. I just can't get interested for long in anything!
But I’m knocking my head against a stone wall again, so I’ll save you the distressing spectacle by signing off right here and now. I adore you, my Evie—Love and kisses to our punkin. Love to all.

Constantly—
Your Phil
Posted by Marilyn at 10:26 AM