Post #282 - January 30, 1944 Uncle Sam is Working at the Navy Yard Making Excellent Wages and Who Should Walk In But Red Barnhart! 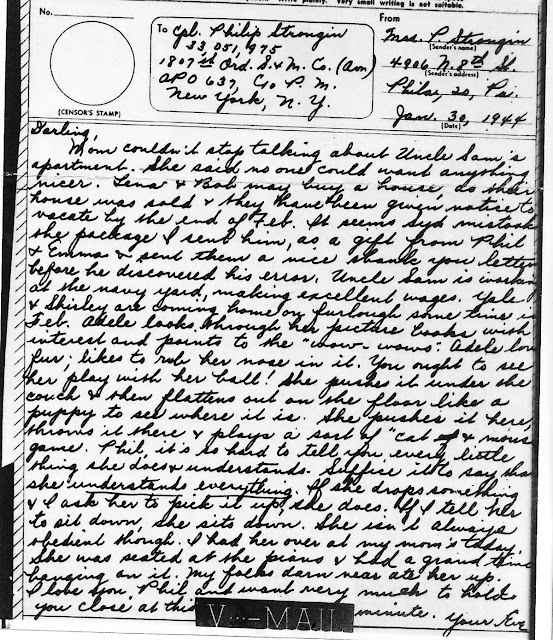 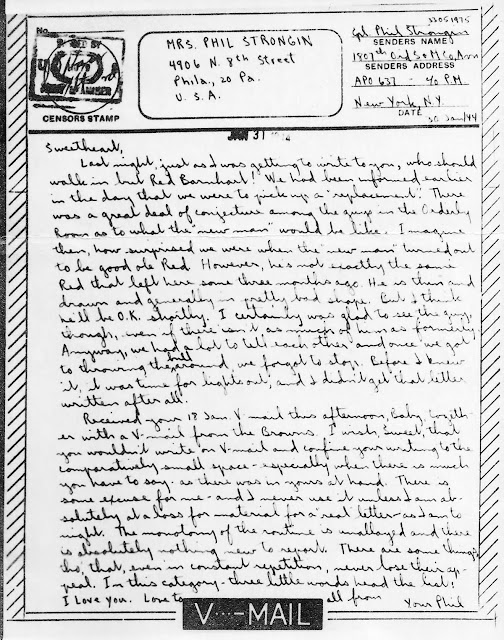 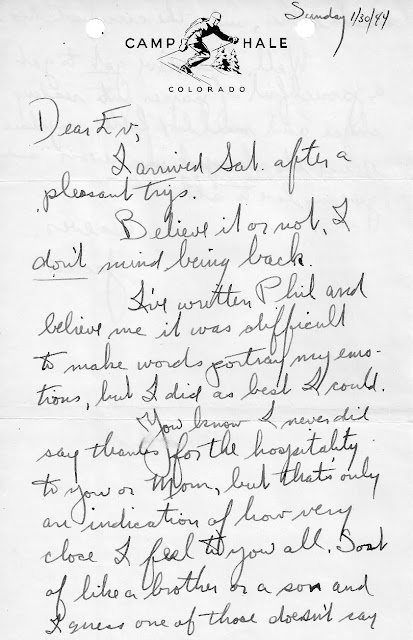 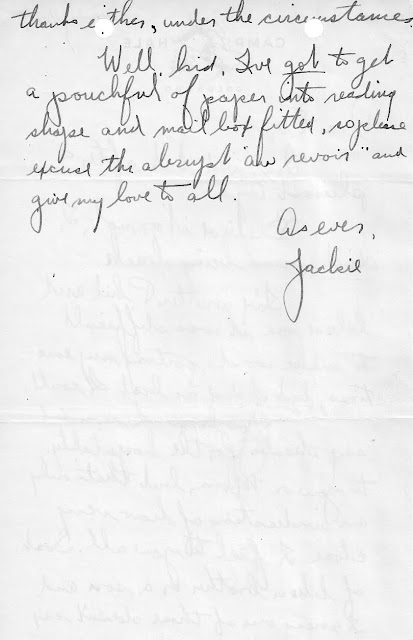 Mom couldn't stop talking about Uncle Sam's apartment. She said no one could want anything nicer. Lena and Bob may buy house, as their house was sold and they have been given notice to vacate by the end of Feb. It seems Syd mistook the package I sent him, as a gift from Phil and Emma, and sent them a nice thank you letter before he discovered his error. Uncle Sam is working at the Navy Yard making excellent wages. Yale and Shirley are coming home on furlough sometime in Feb. Adele looks through her picture books with interest and points to the “wow-wows.” Adele loves fur; likes to rub her nose in it. You ought to see her play with her ball! She pushes it under the couch and then flattens out on the floor like a puppy to see where it is. She pushes it here, throws it there and plays a sort of “cat and mouse” game. Phil, it's so hard to tell you every little thing she does and understands. Suffice it to say that she understands everything. If she drops something and I ask her to pick it up, she does. If I tell her to sit down, she sits down. She isn't always obedient though. I had her over at my mom's today. She was seated at the piano and had a grand time banging on it. My folks darn near ate her up. I love you, Phil, and want very much to hold you close at this minute.

Last night, just as I was getting getting to write to you, who should walk in but Red Barnhart! We had been informed earlier in the day that we were to pick up a “replacement.” There was a great deal of conjecture among the guys in the Orderly Room as to what the “new man” would be like. Imagine, then, how surprised we were when the “new man” turned out to be good ole Red. However, he's not really the same Red that left here some three months ago. He is thin and drawn and generally in pretty bad shape. But, I think he'll be O.K. shortly. I certainly was glad to see the guy, though, even if there isn't as much of him as formerly. Anyway, we had a lot to tell each other and once we got to throwing the bull around, we forgot to stop. Before I knew it, it was time for lights out, and I didn't get that letter written after all.

Received your 18 Jan. V-mail this afternoon, Baby, together with a V-mail from the Browns. I wish, Sweet, that you wouldn't write on V-mail and confine your writing to the comparatively small space—especially when there is much you have to say—as there was in yours at hand. There is some excuse for me and I never use it unless I'm absolutely at a loss for material for a real letter as I am tonight. The monotony of the routine is unallayed and there is absolutely nothing new to report. There are some things, though, even in constant repetition, never lose their appeal. In this category—three little words head the list: I love you. Love to all from

I arrived Sat. after a pleasant trip.

Believe it or not, I don't mind being back.

I've written Phil and believe me it was difficult to make words portray my emotions, but I did as best I could.

You know I never did say thanks for the hospitality to you or Mom, but that's only an indication of how very close I feel to you all. Sort of like a brother or a son and I guess one of those doesn't say thanks either, under the circumstances.

Well kid, I've got to get a pouchful of paper into reading shape and mail box fitted, so please excuse the abrupt “au revoir” and give my love to all.