Post #352 - April 26, 1944 I Spent My Last Cent This Month—On Adele and Unfortunately, I Have No Great Curiosity to See the Many Interesting Sites and Landmarks of England 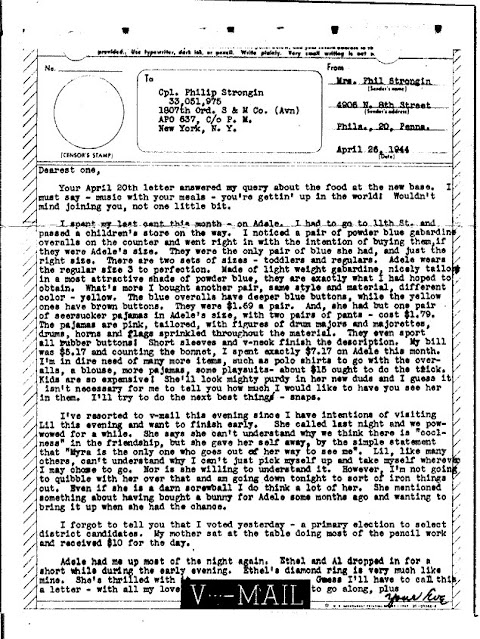 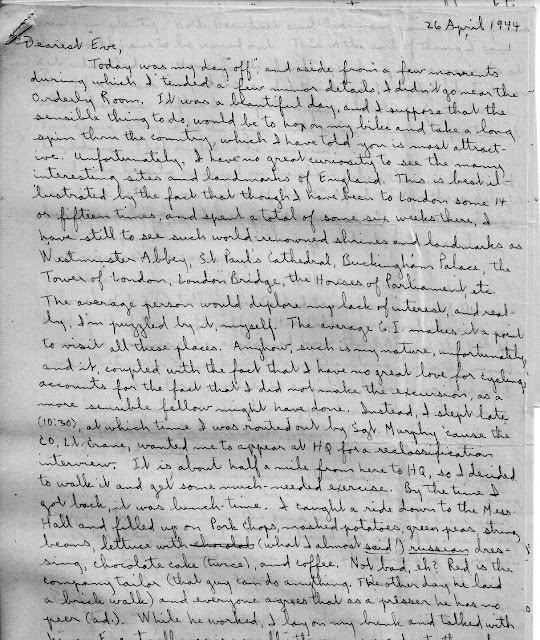 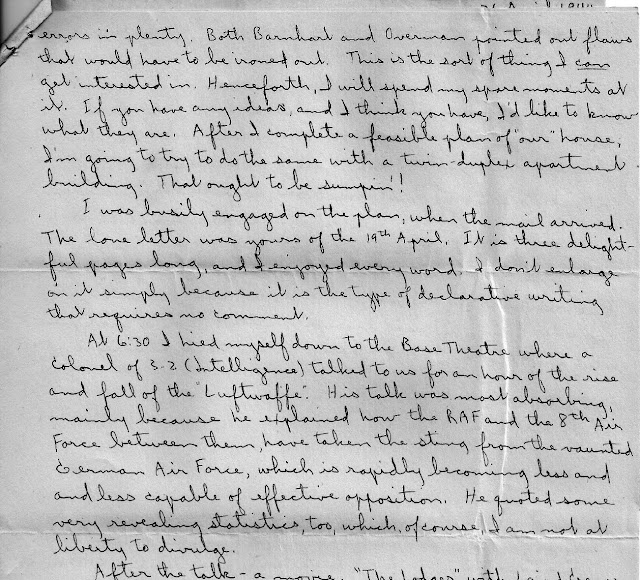 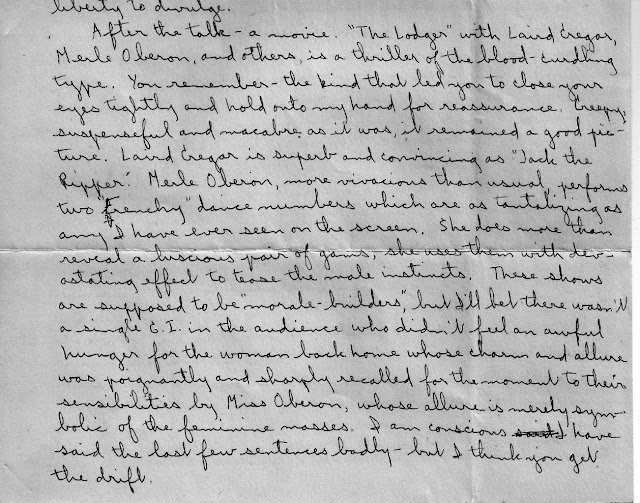 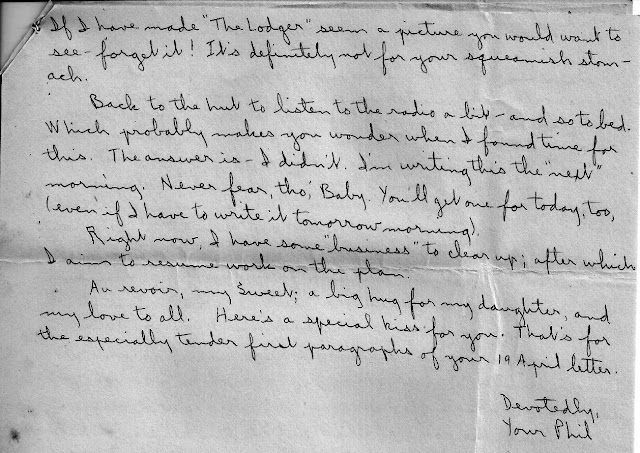 Your April 20th letter answered my query about food at the new base. I must say—music with your meals—you're getting up in the world! Wouldn't mind joining you, not one little bit.

I spent my last vent this month on Adele. I had to go to 11th St. and passed a children's store on the way. I noticed a pair of powder blue gabardine overalls on the counter and went right in with the intention of buying them, if they were Adele’s size. They were the only pair of blue she had, and just the right size. There are two sets of sizes—toddlers and regulars. Adele wears the regular size 3 to perfection. Made of lightweight gabardine, nicely tailored in a most attractive shade of powder blue, they are exactly what I had hoped to obtain. What's more, I bought another pair, same style and material, different color—yellow. The blue overalls have deeper blue buttons, while the yellow ones have brown buttons. They were $1.69 a pair. And, she had but one pair of seersucker pajamas in Adele’s size, with two pairs of pants—cost $1.79. The pajamas are pink, tailored, with figures of drum majors and majorettes, drums, horns, and flags sprinkled throughout the material. They even sport all rubber buttons! Short sleeves and v-neck finish the description. My bill was $5.17 and counting the bonnet, I spent exactly $7.17 on Adele this month. I'm in dire need of many more items, such as polo shirts to go with the overalls, a blouse, more pajamas, some playsuits—about $15 ought to do the trick. Kids are so expensive! She’ll look mighty purdy in her new duds and I guess it isn't necessary for me to tell you how much I would like to have you see her in them. I'll try to do the next best thing—snaps.

I've resorted to v-mail this evening since I have intentions of visiting Lil this evening and want to finish early. She called last night and we pow-wowed for a while. She says she can't understand why we think there is “coolness” in the friendship, but she gave herself away by the simple statement that “Myra is the only one who goes out of her way to see me.” Lil, like many others, can't understand why I can't just pick myself up and take myself wherever I may choose to go. Nor is she willing to understand it. However, I'm not going to quibble with her over that, and I'm going down tonight to sort of iron things out. Even if she is a darn screwball, I do think a lot of her. She mentioned something about having bought a bunny for Adele some months ago and wanting to bring it up when she had the chance.

I forgot to tell you that I voted yesterday—a primary election to select district candidates. My mother sat at the table doing most of the pencil work and received $10 for the day.

Adele had me up most of the night again. Ethel and Al dropped in for a short while during the early evening. Ethel's diamond ring is very much like mine. She's thrilled with it. Guess I'll have to call this a letter—with all my love to go along, plus

Today was my day “off,” and aside from a few moments during which I tended a few minor details, I didn't go near the Orderly Room. It was a beautiful day, and I suppose that the sensible thing to do would be to hop on my bike and take a long spin through the country, which I have told you is most attractive. Unfortunately I have no great curiosity to see the many interesting sights and landmarks of England. This is best illustrated by the fact of that though I have been to London some 14 or fifteen times and spent a total of some six weeks there, I have still to see such world-renowned shrines and landmarks as Westminster Abbey, St. Paul’s Cathedral, Buckingham Palace, the Tower of London, London Bridge, the Houses of Parliament, etc. The average person would deplore my lack of interest, and really, I am puzzled by it myself. The average G.I. makes it a point to visit all these places. Anyhow, such is my nature, unfortunately, and it, coupled with the fact that I have no great love for cycling, accounts for the fact that I did not make the excursion as a more sensible fellow might have done. Instead, I slept late (10:30), at which time I was routed out by Sgt. Murphy, ’cause the CO, Lt. Crane, wanted me to appear at HQ for a reclassification interview. It is about a half a mile from here to HQ, so I decided to walk it and get some much-needed exercise. By the time I got back, it was lunchtime. I caught a ride down to the Mess Hall and filled up on pork chops, mashed potatoes, green peas, string beans, lettuce with chocolate (what I almost said!) russian dressing, chocolate cake (twice), and coffee. Not bad, eh? Red is the company tailor (that guy can do anything. The other day he laid a brick walk) and everyone agrees that as a presser he has no peer (ad.) While he worked, I lay on my bunk and talked with him. Eventually, as it's usually the case, we got into the subject of furniture. As you know, he and his dad have a shop of their own and what he doesn't know about, isn't worth knowing. They even build their own frames! I mention this because I have already commissioned him to make that chaise-lounge for you. (When we are all in happier circumstances, of course.) From furniture, we got to discussing houses and building costs, etc. This inspired me to do something which I have had in mind a long time but never got around to—drawing a plan for “our” house. You understand of course, Chippie, that drawing such a plan is mainly a process of trial and error. My first attempt presented errors in plenty. Both Barnhart and Overman pointed out flaws that would have to be ironed out, but this is the sort of thing I can get interested in. Henceforth, I will spend my spare moments at it. If you have any ideas, and I think you have, I'd like to know what they are. After I complete a feasible plan of “our” house, I'm going to try to do the same with a twin-duplex apartment building. That ought to be sumpin’!

I was busily engaged on the plan when the mail arrived. The lone letter was yours of the 19th April. It is three delightful pages long, and I enjoyed every word. I don't enlarge on it simply because it is the type of declarative writing that requires no comment.

At 6:30 I hied myself down to the Base Theatre, where a Colonel of S-2 (Intelligence) talked to us for an hour of the rise and fall of the “Luftwaffe.” His talk was most absorbing, mainly because he explained how the RAF and the 8th Air Force between them, have taken the sting from the vaunted German Air Force, which is rapidly becoming less and less capable of effective opposition. He quoted some very revealing statistics, too, which, of course, I am not at liberty to divulge.

After the talk—a movie. “The Lodger” with Laird Cregor, Merle Oberon, and others, is a thriller of the blood-curdling type. You remember—the kind that led you to close your eyes tightly and hold on to my hand for reassurance. Creepy, suspenseful and macabre as it was, it remained a good picture. Laird Cregor is superb and convincing as “Jack the Ripper.” Merle Oberon, more vivacious than usual, performs two “Frenchy” dance numbers, which are as tantalizing as any I've ever seen on the screen. She does more than reveal a luscious pair of gams. She uses them with devastating effect to tease the male instincts. These shows are supposed to be “morale-builders,” but I'll bet there wasn't a single G.I. in the audience who didn't feel an awful hunger for the woman back home whose charm and allure was poignantly and sharply recalled for the moment to their sensibilities by Miss Oberon, whose allure is merely symbolic of the feminine masses. I am conscious I have said the last few sentences badly—but I think you get the drift.

If I have made “The Lodger” seem a picture you would want to see—forget it! It's definitely not for your squeamish stomach.

Back to the hut to listen to the radio a bit—and so to bed. Which probably makes you wonder when I found time for this. The answer is—I didn't. I'm writing this the “next” morning. Never fear, though, Baby. You'll get one for today, too, (even if I have to write it tomorrow morning).

Right now, I have some “business” to clear up; after which I aim to resume work on the plan.

Au revoir, my Sweet; a big hug for my daughter, and my love to all. Here's a special kiss for you. That's for the especially tender first paragraphs of your 19 April letter.