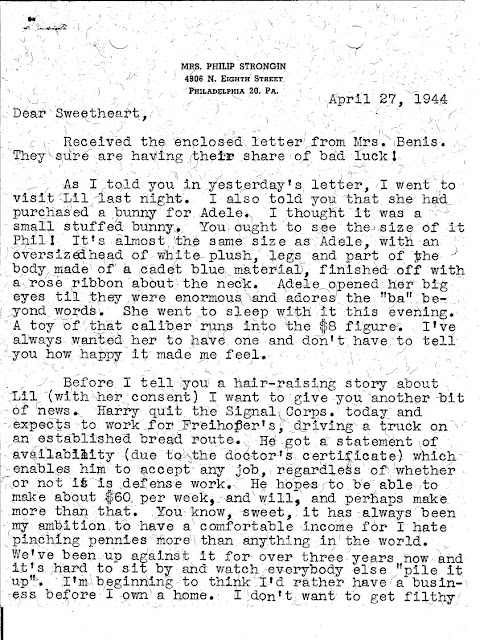 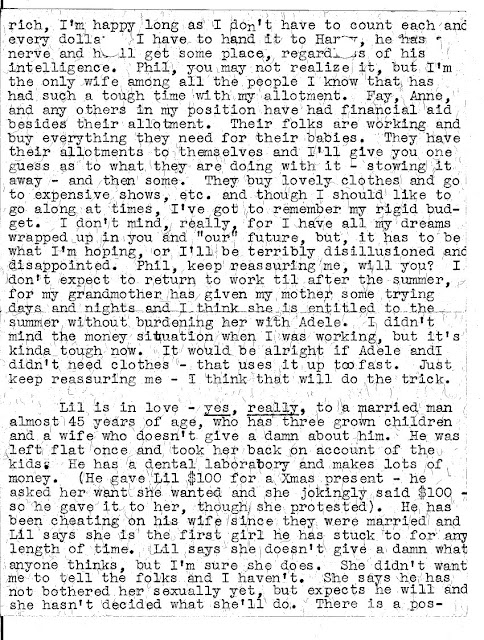 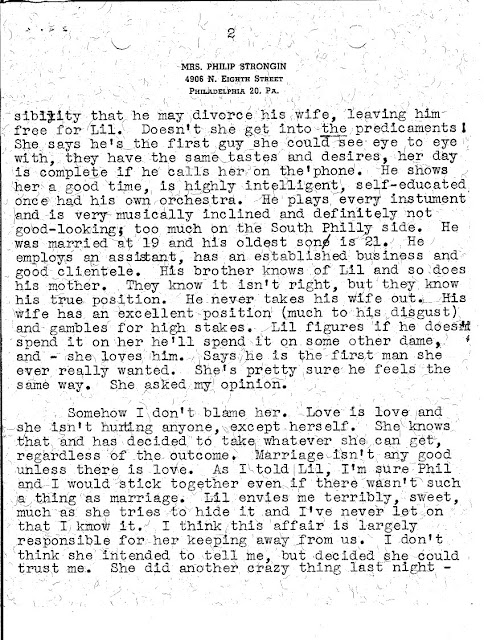 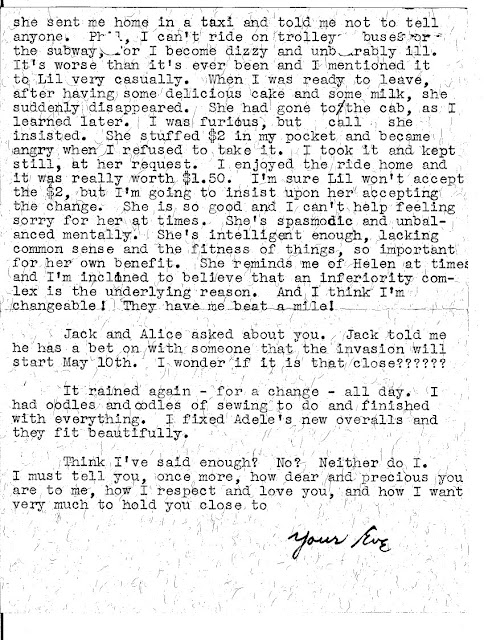 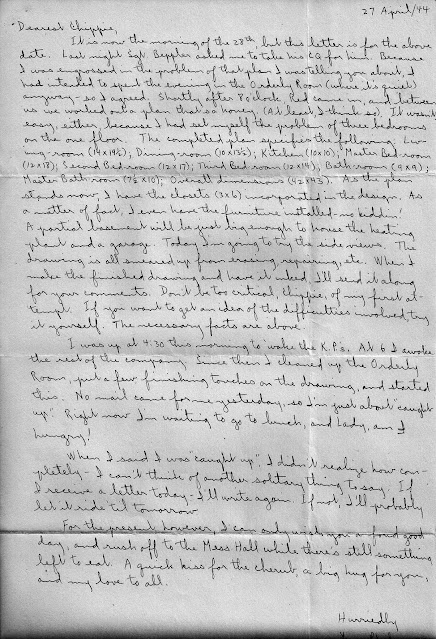 Received the enclosed letter from Mrs. Benis. They sure are having their share of bad luck!

As I told you in yesterday's letter, I went to visit Lil last night. I also told you that she had purchased a bunny for:Adele. I thought it was a small stuffed bunny. You ought to see the size of it Phil! It's almost the same size as Adele, with an oversized head of white plush, legs and part of the body made of a cadet blue material, finished off with a rose ribbon about the neck. Adele opened her big eyes til they were enormous and adores the "ba" beyond words. She went to sleep with it this evening. A toy of that caliber runs into the $8 figure. I've always wanted her to have one and don't have to tell you how happy it made me feel.

Before I tell you a hair-raising story about Lil (with her consent) I want to give you another bit in of news. Harry quit the Signal Corps today and expects to work for Freihofer's driving a truck on an established bread route: He got a statement of availability (due to the doctor's certificate) which enables him to accept any job, regardless of whether or not it is defense work. He hopes to be able to make about $60 per week, and will, and perhaps make more than that. You know, sweet, it has always been my ambition to have a comfortable income for I hate pinching pennies more than anything in the world. We've been up against it for over three years now and it's hard to sit by and watch everybody else "pile it up.” I'm beginning to think I'd rather have a business before I own a home. I don't want to get filthy rich, I'm happy long as I don't have to count each and every dollar. I have to hand it to Harry, he has nerve and he’ll get some places regardless of his intelligence. Phil, you may not realize it, but I'm the only wife, among all the people I know that has had such a tough time with my allotment. Fay, Anne, and any others in my position have had financial aid besides their allotment. Their folks are working and buy everything they need for their babies. They have their allotments to themselves and I’ll give you one guess as to what they are doing with it—stowing it away—and then some. They buy lovely clothes and go to expensive shows, etc. and though I should like to go along at times, I've got to remember my rigid budget. I don't mind, really, for I have all my dreams wrapped up in you and "our” future, but, it has to be what I'm hoping, or I'll be terribly disillusioned and disappointed. Phil, keep reassuring me, will you? I don't expect to return to work til after the summer, for my grandmother has given my mother some trying days and nights, and I think she is entitled to the summer without burdening her with Adele. I didn't mind the money situation when I was working, but it's kinda tough now. It would be alright if Adele and I didn't need clothes—that uses it up too fast. Just keep reassuring me—I think that will do the trick.

Lil is in love—yes, really, to a married man almost 45 years of age, who has three grown children and a wife who doesn't give a damn about him. He was left flat once and took her back on account of the kids. He has a dental laboratory and makes lots of money. (He gave Lil $100 for a Xmas present—he asked her want she wanted and she jokingly said $100—so he gave it to her, though, she protested). He has been cheating on his wife since they were married and Lil says she is the first girl he has stuck to for any length of time. Lil says she doesn't give a damn what anyone thinks, but I'm sure she does. She didn't want me to tell the folks and I haven't. She says he has not bothered her sexually yet, but expects he will and she hasn't decided what she'll do. There is a possibility that he may divorce his wife, leaving him free for Lil. Doesn't she get into the predicaments! She says he's the first guy she could see eye to eye with, they have the same tastes and desires, her day is complete if he calls her on the phone. He shows her a good time, is highly intelligent, self-educated, once had his own orchestra. He plays, every instrument and is very musically inclined and definitely not good-looking; too much on the South Philly side. He was married at 19 and his oldest son is 21. He employs an assistant, has an established business and good clientele. His brother knows of Lil and so does his mother. They know it isn't right, but they know his true position. He never takes his wife out. His wife has an excellent position (much to his disgust) and gambles for high stakes. Lil figures if he doesn’t spend it on her he’ll spend it on some other dame, and—she loves him. Says he is the first man she ever really wanted. She's pretty sure he feels the same way. She asked my opinion.

Somehow I don't blame her. Love is love and she isn't hurting anyone, except herself. She knows that, and has decided to take whatever she can get, regardless of the outcome. Marriage isn't any good unless there is love. As I told Lil, I'm sure Phil and I would stick together even if there wasn't such a thing as marriage. Lil envies me terribly, sweet, much as she tries to hide it and I've never let on that I know it. I think this affair is largely responsible for her keeping away from us. I don’t think she intended to tell me, but decided she could trust me. She did another crazy thing last night—she sent me home in a taxi and told me not to tell anyone. Phil, I can't ride on trolleys, buses or the subway for I become dizzy and unbearably ill. It's worse than it's ever been and I mentioned it to Lil very casually. When I was ready to leave, after having some delicious cake and some milk, she suddenly disappeared. She had gone to the cab, as I learned later. I was furious, but call she insisted. She stuffed $2 in my pocket and became angry when I refused to take it. I took it and kept still, at her request. I enjoyed the ride home and it was really worth $1.50. I'm sure Lil won't accept the $2, but I'm going to insist upon her accepting the change. She is so good and I can't help feeling sorry for her at times. She's spasmodic and unbalanced mentally. She's intelligent enough, lacking common sense and the fitness of things so important for her own benefit. She reminds me of Helen at times and I'm inclined to believe that an inferiority complex is the underlying reason. And I think I'm changeable! They have me beat a mile!

Jack and Alice asked about you. Jack told me he has a bet on with someone that the invasion will start May 10th. I wonder if it is that close??????

It rained again—for a change—all day. I had oodles and oodles of sewing to do and finished with everything. I fixed Adele's new overalls and they fit beautifully.

Think I've said enough? No? Neither do I. I must tell you once more how dear and precious you are to me, how I respect and love you, and how I want very much to hold you close to

It is now the morning of the 28th, but this letter is for the above date. Last night Sgt. Beppler asked me to take his CQ for him. Because I was engrossed in the problem of that plan I was telling you about, I had intended to spend the evening in the Orderly Room (where it's quiet) anyway—so I agreed. Shortly after 8 o'clock, Red came in, and between us we worked out a plan that's a honey. (At least I think so). It wasn’t easy, either, because I had set myself the problem of three bedrooms on the one floor. The completed plan specifies the following: Living room (14 x 19-1/2); Dining room (10 x 13-1/2); Kitchen (10 x 10); Master Bed-room (12 by 18); Second Bed-room (12 x 17); Third Bed-room (12 x 14); Bath-room (9 x 9); Master Bath-room (7-1/2 x 10); Overall dimensions (42 x 43). As the plan stands now, I have the closets (3 x 6) incorporated in the design. As a matter of fact, I even have the furniture installed—no kiddin’! A partial basement will be just big enough to house the heating plant and a garage. Today I'm going to try the side views. The drawing is all smeared up from erasing, repairing, etc. When I make the finished drawing and have it inked, I'll send it along for your comments. Don't be too critical, Chippie, of my first attempt. If you want to get an idea of the difficulties involved, try it yourself. The necessary facts are above.

I was up at 4:30 this morning to wake the K.P.’s. At 6 I awoke the rest of the company. Since then, I cleaned up the Orderly Room, put a few finishing touches on the drawing, and started this. No mail came for me yesterday, so I'm just about “caught up.” Right now I'm waiting to go to lunch, and Lady, am I hungry!

When I said I was caught up, I didn't realize how completely. I can't think of another solitary thing to say. If I receive a letter today, I'll write again. If not, I'll probably let it ride ’til tomorrow.

For the present, however, I can only wish you a fond good day, and rush off to the Mess Hall while there's still something left to eat. A quick kiss from the cherub, a big hug for you, and my love to all.