Post #354 - April 28, 1944 Seymour Went Down to Enlist in the Navy and was Rejected and I am having a Helluva Lot of Fun with this New Hobby of Mine 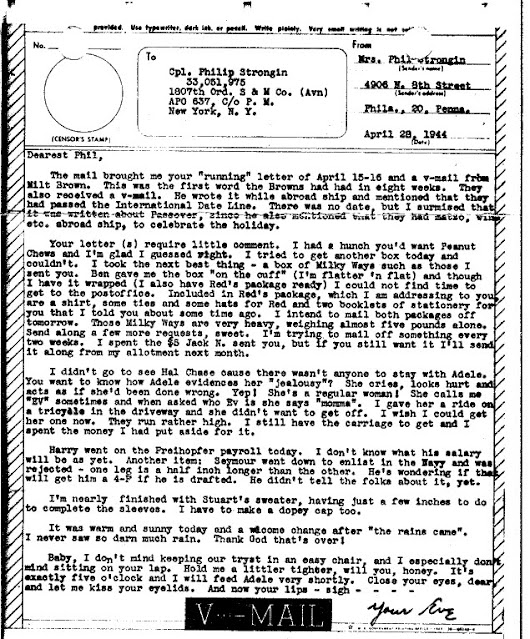 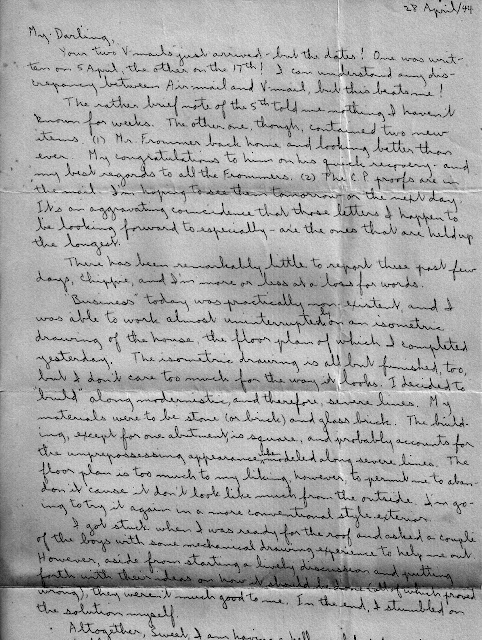 April 28, 1944
Dearest Phil,
The mail brought me your “running” letter of April 15-16 and a v-mail from Milt Brown. This was the first word the Browns had had in eight weeks. They also received a v-mail. He wrote it while aboard ship and mentioned that they had passed the International Date Line. There was no date, but I surmised that it was written about Passover, since he also mentioned that they had matzo, wine, etc. aboard ship to celebrate the holiday.
Your letter(s) require little comment. I had a hunch you’d want Peanut Chews, and I'm glad I guessed right. I tried to get another box today and couldn't. I took the next best thing—a box of Milky Ways such as those I sent you. Ben gave me the box “on the cuff” (I’m flatter ’n flat) and though I have it wrapped (I also have Red’s package ready) I could not find time to get to the post office. Included in Red’s package, which I am addressing to you, are a shirt, some ties and some hats for Red and two booklets of stationery for you that I told you about some time ago. I intend to mail both packages off tomorrow. Those Milky Ways are very heavy, weighing almost five pounds alone. Send along a few more requests, sweet. I'm trying to mail off something every two weeks. I spent the $5 Jack N. sent you, but if you still want it, I'll send it along from my allotment next month.
I didn't go to see Hal Chase cause there wasn't anyone to stay with Adele. You want to know how Adele evidences her “jealousy”? She cries, looks hurt and acts as if she'd been done wrong. Yep! She's a regular woman! She calls me “EV” sometimes and when asked, who Ev is she says, “momma.” I gave her a ride on a tricycle in the driveway and she didn't want to get off. I wish I could get her one now. They run rather high. I still have the carriage to get and I spent the money I had put aside for it.
Harry went on the Freihofer payroll today. I don't know what his salary will be as yet. Another item: Seymour went down to enlist in the Navy and was rejected—one leg is a half inch longer than the other. He’s wondering if that will get him a 4-P if he is drafted. He didn't tell the folks about it yet.
I'm nearly finished with Stuart’s sweater, having just a few inches to do to complete the sleeves. I have to make a dopey cap, too.
It was warm and sunny today and a welcome change after “the rains came.” I never saw so darn much rain. Thank God that's over!
Baby, I don't mind keeping our tryst in an easy chair, and I especially don't mind sitting on your lap. Hold me little tighter, will you, honey? It's exactly five o'clock and I will feed Adele very shortly. Close your eyes, dear, and let me kiss your eyelids. And now your lips—sigh - - - -
Your Eve
28 April 1944
My Darling,
Your two V-mails just arrived—but the dates! One was written on 5 April, the other on the 17th! I can understand any discrepancy between Air-mail and V-mail, but this beats me!
The rather brief note of the 5th told me nothing I haven't known for weeks. The other one, though, contained two new items. (1) Mr. Frommer back home and looking better than ever. My congratulations to him on his quick recovery and my best regards to all the Frommers. (2) The Claire Pruett proofs are in the mail. I'm hoping to see them tomorrow or the next day. It's an aggravating coincidence that those letters I happen to be looking forward to especially—are the ones that are held up the longest.
There has been remarkably little to report these past few days, Chippie, and I'm more or less at a loss for words.
“Business” today was practically non-existent, and I was able to work almost uninterruptedly on an isometric drawing of the house, the floor plan of which I completed yesterday. The isometric drawing is all but finished, too, but I don't care too much for the way it looks. I decided to “build” along Modernistic, and therefore severe lines. My materials were to be stone (or brick) and glass brick. The building, except for one abutment, is square, and probably accounts for the unprepossessing appearance when modeled along severe lines. The floor plan is too much to my liking, however, to permit me to abandon it ’cause it don't look like much from the outside. I'm going to try again in a more conventional style exterior.
I got stuck when I was ready for the roof and asked a couple of the boys with some mechanical drawing experience to help me out. However, aside from starting a lively discussion and putting forth with their ideas on how it should be done (all of which proved wrong), they weren't much good to me. In the end, I stumbled on the solution myself.
Altogether, Sweet, I am having a helluva lot of fun with this new hobby of mine. Who knows—maybe someday we’ll put one of my plans to better use—? I'd like to have your ideas on the house you would like to live in, Chippie. Think it over.
That's about all for today, Sweet, so I'll take my leave—after I hold you close, kiss you, oh, so tenderly (but nonetheless thoroughly) and whisper “I adore you” into your ear (the left one). A kiss for Adele. My love to all.
Ever,
Your Phil
Posted by Marilyn at 10:04 AM