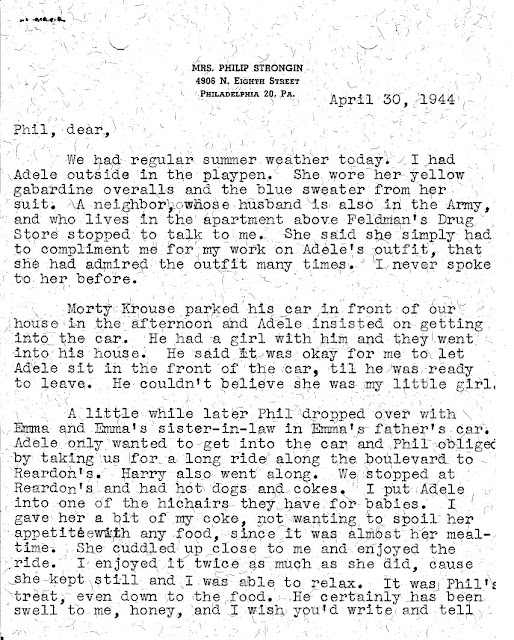 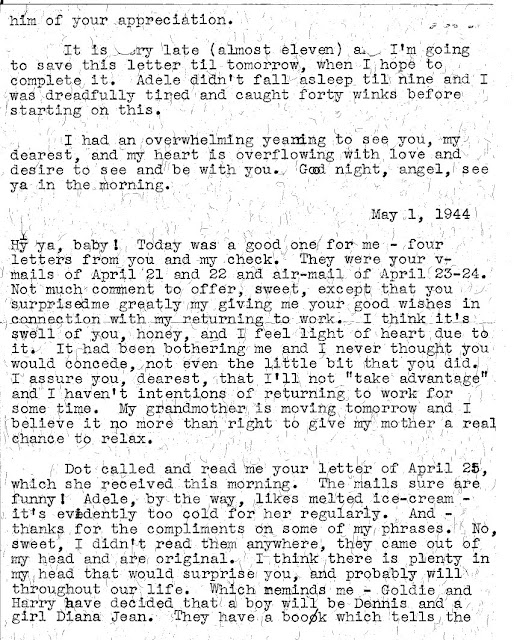 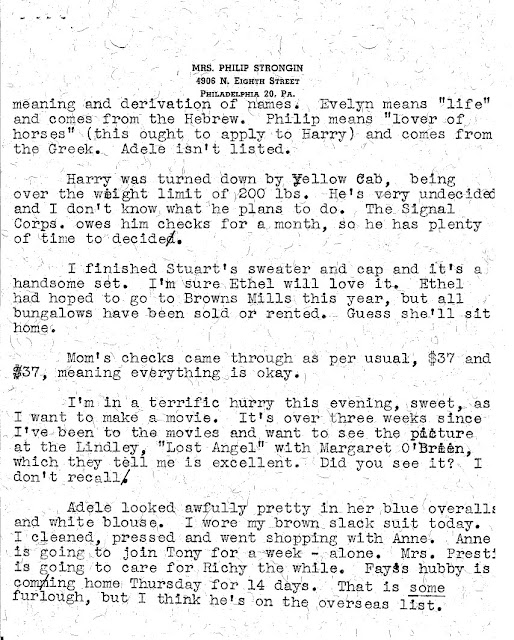 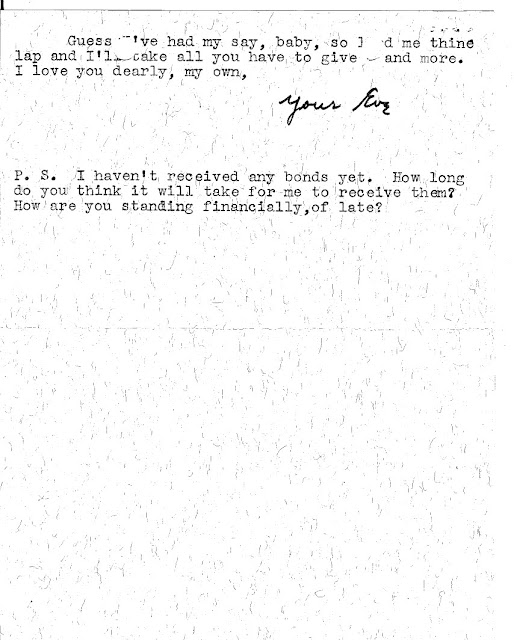 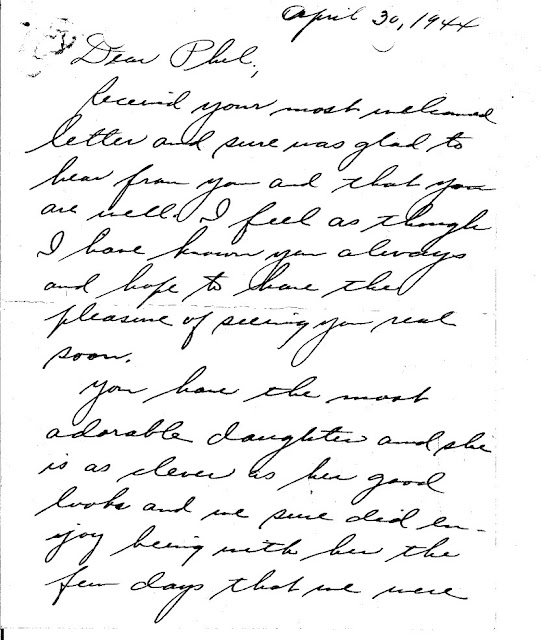 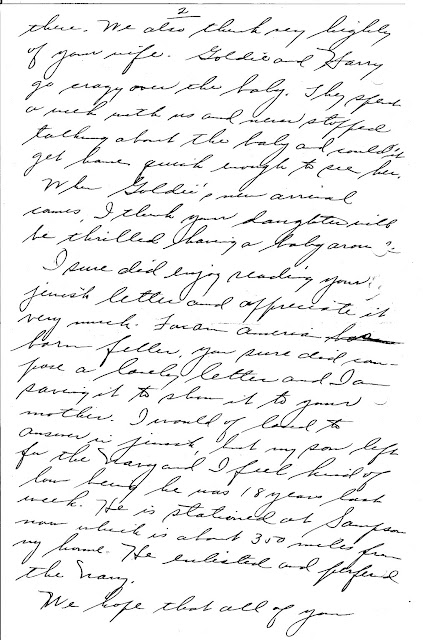 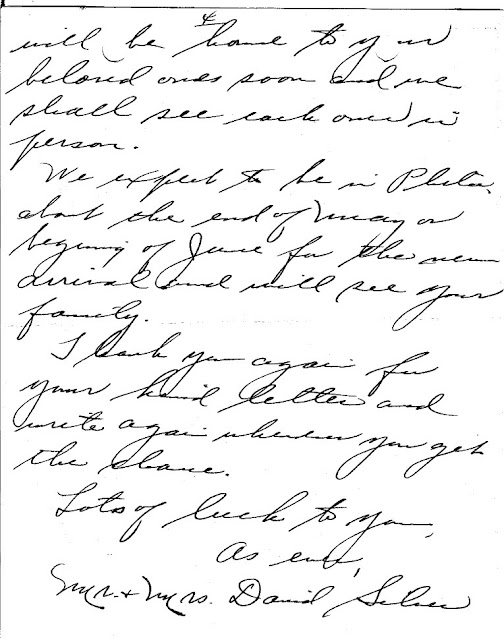 We had regular summer weather today. I had Adele outside in the playpen. She wore her yellow gabardine overalls and the blue sweater from her suit. A neighbor whose husband is also in the Army, and who lives in the apartment above Feldman's Drug Store stopped to talk to me. She said she simply had to compliment me for my work on Adele's outfit, that she had admired the outfit many times. I never spoke to her before.

Morty Krouse parked his car in front of our house in the afternoon and Adele insisted on getting into the car. He had a girl with him and they went into his house. He said it was okay for me to let Adele sit in the front of the car, til he was ready to leave. He couldn't believe she was my little girl,

A little while later Phil dropped over with Emma and Emma's sister-in-law in Emma's father's car. Adele only wanted to get into the car and Phil obliged by taking us for a long ride along the boulevard to Reardon's. Harry also went along. We stopped at Reardon's and had hot dogs and cokes. I put Adele into one of the hichairs they have for babies. I gave her a bit of my coke, not wanting to spoil her appetite with any food, since it was almost her meal time. She cuddled up close to me and enjoyed the ride. I enjoyed it twice as much as she did, cause she kept still and I was able to relax. It was Phil's treat, even down to the food. He certainly has been swell to me, honey, and I wish, you’d write and tell him of your appreciation.

It is very late (almost eleven) and I'm going to save this letter til tomorrow, when I hope to complete it. Adele didn't fall asleep til nine and I was dreadfully tired and caught forty winks before starting on this.

I had an overwhelming yearning to see you, my dearest, and my heart is overflowing with love and desire to see and be with you. Good night, angel, see ya in the morning.

Hy ya, baby! Today was a good one for me - four letters from you and my check. They were your v-mails of April 21 and 22 and air-mail of April 23-24. Not much comment to offer, sweet, except that you surprised me greatly by giving me your good wishes in connection with my returning to work. I think it's swell of you, honey, and I feel light of heart due to it. It had been bothering me and I never thought you would concede, not even the little bit that you did. I assure you, dearest, that I'll not "take advantage" and I haven't intentions of returning to work for some time. My grandmother is moving tomorrow and I believe it no more than right to give my mother a real I chance to relax.

Dot called and read me your letter of April 25, which she received this morning. The mails sure are funny! Adele, by the way, likes melted ice-cream—it's evidently too cold for her regularly. And—thanks for the compliments on some of my phrases. No, sweet, I didn't read them anywhere, they came out of my head and are original. I think there is plenty in my head that would surprise you, and probably will throughout our life. Which reminds me—Goldie and Harry have decided that a boy will be Dennis and a girl Diana Jean. They have a book which tells, the meaning and derivation of names. Evelyn means "life" and comes from the Hebrew. Philip means "lover of horses" (this ought to apply to Harry) and comes from the Greek. Adele isn't listed.

Harry was turned down by Yellow Cab, being over the weight limit of 200 lbs. He's very undecided and I don't know what he plans to do. The Signal Corps. owes him checks for a month, so he has plenty of time to decide.

I finished Stuart's sweater and cap and it is a handsome set. I'm sure Ethel will love it. Ethel had hoped to go to Browns Mills this year, but all bungalows have been sold or rented. Guess she'll sit home.

Mom's checks came through as per usual, $37 and $37, meaning everything is okay.

I'm in a terrific hurry this evening, sweet, as I want to make a movie. It's over three weeks since I've been to the movies and want to see the picture at the Lindley, “Lost Angel" with Margaret O'Brien, which they tell me is excellent. Did you see it? I don't recall.

Adele looked awfully pretty in her blue overalls and white blouse. I wore my brown slack suit today. I cleaned, pressed and went shopping with Anne. Anne is going to join Tony for a week—alone. Mrs. Presti is going to care for Richy the while. Fay’s hubby is coming home Thursday for 14 days. That is some furlough, but I think he's on the overseas list.

Guess I’ve had my say, baby, so Iend me thine lap and I'll take all you have to give and more. I love you dearly, my own,

P. S. I haven!t received any bonds yet. How long do you think it will take for me to receive them? How are you standing financially, of late?

Received your most welcome letter and sure was glad to hear from you and that you are well. I feel as though I have known you always and hope to have the pleasure of seeing you real soon.

You have the most adorable daughter and she is as clever as her good looks and we sure did enjoy being with her. The few days that we were there. We also think very highly of your wife. Goldie and Harry go crazy over the baby. They spent a week with us and never stopped talking about the baby and couldn't get home quick enough to see her. When Goldie’s new arrival comes, I think your daughter will be thrilled having a baby around.

I sure did enjoy reading your Jewish letter and appreciate it very much. For an American born fellow, you sure did compose a lovely letter and I am saving it to show to your mother. I would of loved to answer in Jewish, but my son left for the Navy and I feel kind of low being he was 18 years last week. He's stationed at Sampson now, which is about 350 miles from my home. He enlisted and preferred the Navy.

We hope that all of you will be home to your beloved ones soon, and we shall see each one in person. We expect to be in Philadelphia about the end of May or beginning of June for the new arrival and will see your family.

Thank you again for your kind letter and write again whenever you get the chance. Lots of luck to you.