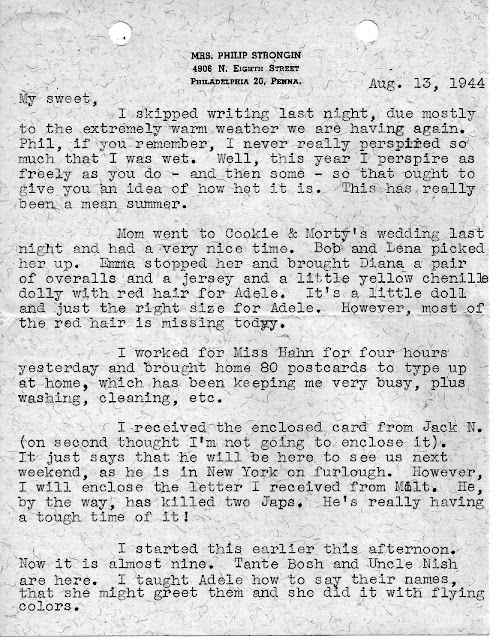 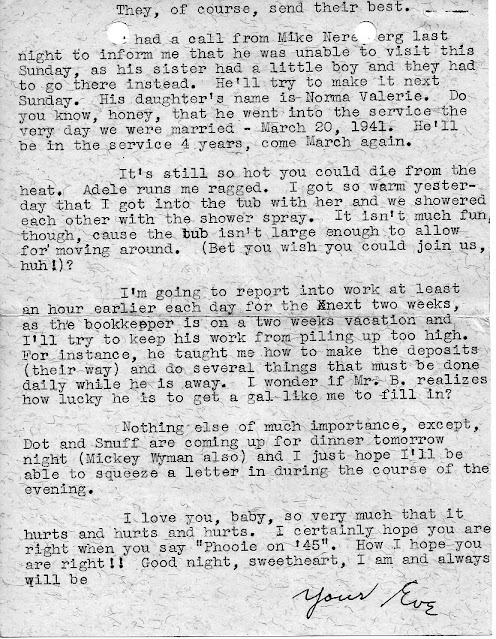 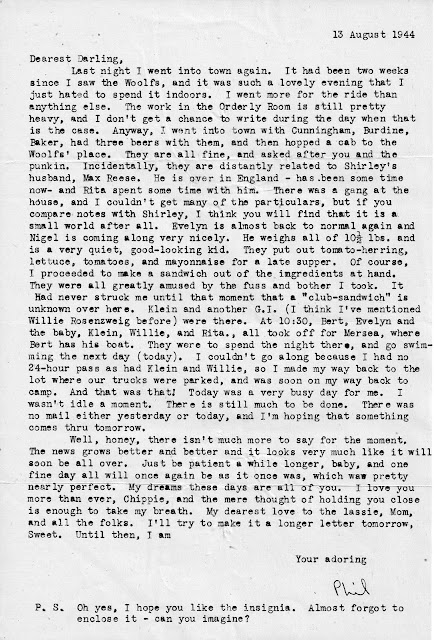 Aug. 13, 1944
My sweet,
I skipped writing last night, due mostly to the extremely warm weather we are having again. Phil, if you remember, I never really perspired so much that I was wet. Well, this year I perspire as freely as you do - and then some - so that ought to give you an idea of how hot it is. This has really been a mean summer.

Mom went to Cookie & Morty's wedding last night and had a very nice time. Bob and Lena picked her up. Emma stopped here and brought Diana a pair of overalls and a jersey and a little yellow chenille dolly with red hair for Adele. It's a little doll and just the right size for Adele. However, most of the red hair is missing today.

I worked for Miss Hahn for four hours yesterday and brought home 80 postcards to type up at home, which has been keeping me very busy, plus washing, cleaning, etc.

I received the enclosed card from Jack N. (on second thought I'm not going to enclose it). It just says that he will be here to see us next weekend, as he is in New York on furlough. However, I will enclose the letter I received from Milt. He, by the way, has killed two Japs. He's really having a tough time of it!

I started this earlier this afternoon. Now it is almost nine. Tante Bosh and Uncle Nish are here. I taught Adele how to say their names, that she might greet them and she did it with flying colors.

They, of course, send their best.

I had a call from Mike Nerenberg last night to inform me that he was unable to visit this Sunday, as his sister had a little boy and they had to go there instead. He'll try to make it next a Sunday. His daughter's name is Norma Valerie. Do you know, honey, that he went into the service the very day we were married - March 20, 1941. He'll be in the service 4 years, come March again.

It's still so hot you could die from the heat. Adele runs me ragged. I got so warm yesterday that I got into the tub with her and we showered each other with the shower spray. It isn't much fun, though, cause the tub isn't large enough to allow for moving around. (Bet you wish you could join us, huh!)?

I’m going to report into work at least an hour earlier each day for the next two weeks, as the bookkeeper is on a two weeks vacation and I'll try to keep his work from piling up too high. For instance, he taught me how to make the deposits (their way) and do several things that must be done daily while he is away. I wonder if Mr. B. realizes how lucky he is to get a gal like me to fill in?

Nothing else of much importance, except, Dot and Snuff are coming up for dinner tomorrow night (Mickey Wyman also) and I just hope I'll be able to squeeze a letter in during the course of the evening.

Last night I went into town again. It had been two weeks since I saw the Woolfs, and it was such a lovely evening that I just hated to spend it indoors, I went more for the ride than anything else. The work in the Orderly Room is still pretty heavy, and I don't get a chance to write during the day when that is the case. Anyway, I went into town with Cunningham, Burdine, Baker, had three beers with them, and then hopped a cab to the Woolfs' place. They are all fine, and asked after you and the punkin. Incidentally, they are distantly related to Shirley's husband, Max Reese. He is over in England - has been some time now - and Rita spent some time with him. There was a gang at the house, and I couldn't get many of the particulars, but if you compare notes with Shirley, I think you will find that it is a small world after all. Evelyn is almost back to normal again and Nigel is coming along very nicely. He weighs all of 10-1/2 lbs., and is a very quiet, good-looking kid. They put out tomato-herring, lettuce, tomatoes, and mayonnaise for a late supper. Of course, I proceeded to make a sandwich out of the ingredients at hand. They were all greatly amused by the fuss and bother I took. It had never struck me until that moment that a “club-sandwich" is unknown over here, Klein and another G.I. (I think I've mentioned Willie Rosenzweig before) were there. At 10:30, Bert, Evelyn and the baby, Klein, Willie, and Rita, all took off for Mersea, where Bert has his boat. They were to spend the night there, and go swimming the next day (today). I couldn't go along because I had no 24-hour pass as had Klein and Willie, so I made my way back to the lot where our trucks were parked, and was soon on my way back to camp. And that was that. Today was a very busy day for me. I wasn't idle a moment. There is still much to be done. There was no mail either yesterday or today, and I'm hoping that something comes thru tomorrow.

Well, honey, there isn't much more to say for the moment, The news grows better and better and it looks very much like it will soon be all over. Just be patient a while longer, baby, and one fine day all will once again be as it once was, which was pretty nearly perfect. My dreams these days are all of you. I love you more than ever, Chippie, and the mere thought of holding you close is enough to take my breath. My dearest love to the lassie, Mom, and all the folks. I'll try to make it a longer letter tomorrow, Sweet. Until then, I am

Your adoring
Phil
P.S. Oh yes, I hope you like the insignia. Almost forgot to enclose it - can you imagine?