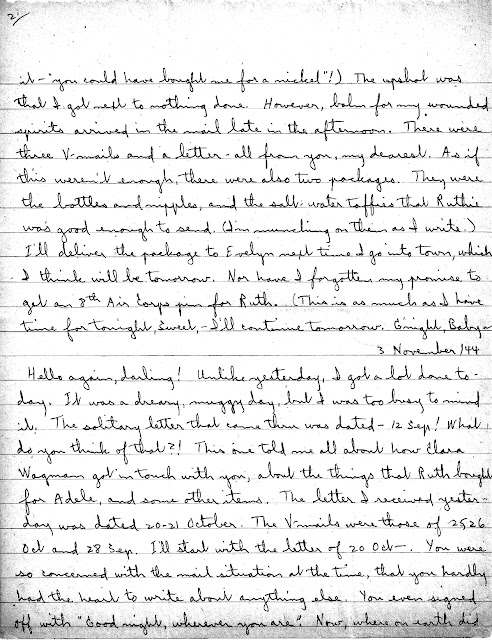 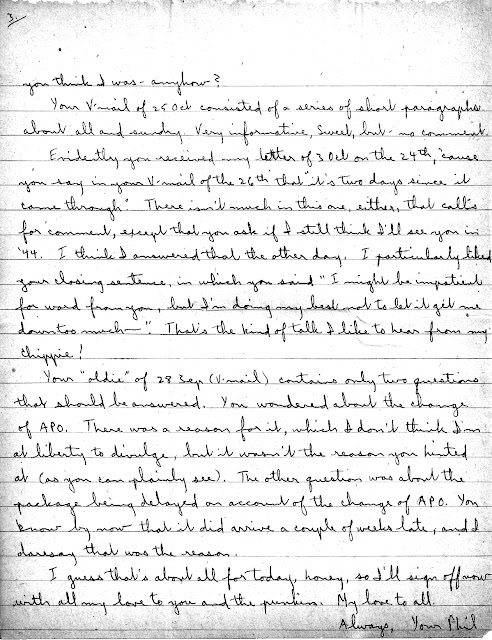 Just returned from the base theater, where I saw a show entitled "Take it Easy.” The cast consisted an M.C., a comedian, a slight-of-hand artist, a gal dancer, and a gal who played the accordion and provided all the incidental music for the show. Back in the States, it wouldn't rank with second-rate vaudeville, but we're so hungry for an American gag, some American jive, and a pair of good-looking gams in silk-stockings, that if these requisites are fulfilled - that's all that's necessary - and the performers obliged in all respects.
Today was the kind that I could very well do without - that is, as far as my work and my feelings were concerned. Just about this time every month, everything “gangs- up” on me. Beside having the Company History to worry about, there was also the Soldiers' Deposits, PTT's (money to be sent home), a pay voucher for an officer, and a few other odds and ends, Well, Chippie, I don't mind the work - I rather like it, but it so happened that Sgt. Murphy went on pass this afternoon, and the result was that every time I tried to get something done, the damned phone would ring and I'd have to drop what I was doing to go off and call someone or other to the phone. After this happened about five times, I was fit to be tied. (As Red would say it - “you could have bought me for a nickel"!) The upshot was that I got next to nothing done. However, balm for my wounded spirits arrived in the mail late in the afternoon. There were three V-mails and a letter - all from you, my dearest. As if this weren't enough, there were also two packages. They were the bottles and nipples, and the salt water taffies that Ruthie was good enough to send. (I’m munching on them as I write.) I'll deliver the package to Evelyn next time I go into town, which I think will be tomorrow. Nor have I forgotten my promise to get an 8th Air Corps pin for Ruth. (This is as much as I have time for tonight, Sweet, - I'll continue tomorrow, G’night, Baby.

3 November 1944
Hello again, darling! Unlike yesterday, I got a lot done today. It was a dreary, muggy day, but I was too busy to mind it. The solitary letter that came thru was dated - 12 Sep! What do you think of that?! This one told me all about how Clara Wagman got in touch with you, about the things that Ruth bought for Adele, and some other items. The letter I received yesterday was dated 20-21 October. The V-mails were those of 25, 26 Oct. and 28 Sep. I'll start with the letter of 20 Oct. You were so concerned with the mail situation at the time, that you hardly had the heart to write about anything else. You even signed off with "Good night, wherever you are". Now, where on earth did you think I was - anyhow?

Your V-mail of 25 Oct consisted of a series of short paragraphs about all and sundry. Very informative, Sweet, but no comment.

Evidently you received my letter of 3 Oct. on the 24th, cause you say in your mail of the 26th that it's two days since it came through. There isn't much in this one, either, that calls for comment, except that you ask if I still think I'll see you in ’44. I think I answered that the other day. I particularly liked your closing sentence, in which you said "I might be impatient for word from you, but I'm doing my best not to let it get me down too much -". That's the kind of talk I like to hear from my Chippie!

Your "oldie" of 28 Sep. (V-mail) contains only two questions that should be answered. You wondered about the change of APO. There was a reason for it, which I don't think I’m at liberty to divulge, but it wasn't the reason you hinted at (as you can plainly see). The other question was about the package being delayed on account of the change of APO. You know by now that it did arrive a couple of weeks late, and I daresay that was the reason.

I guess that's about all for today, honey, so I'll sign off now with all my love to you and the punkin. My love to all.