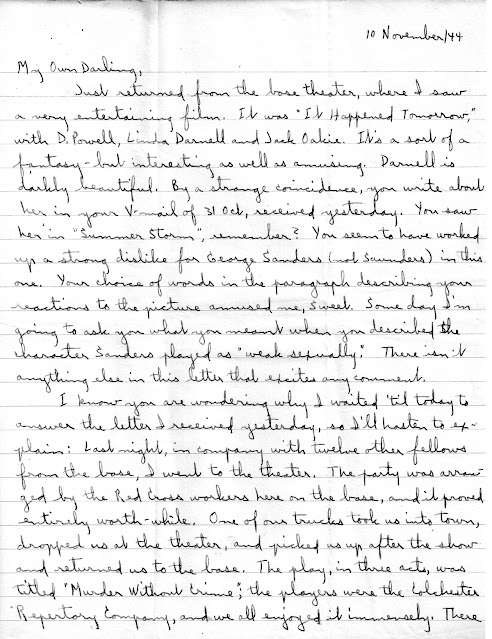 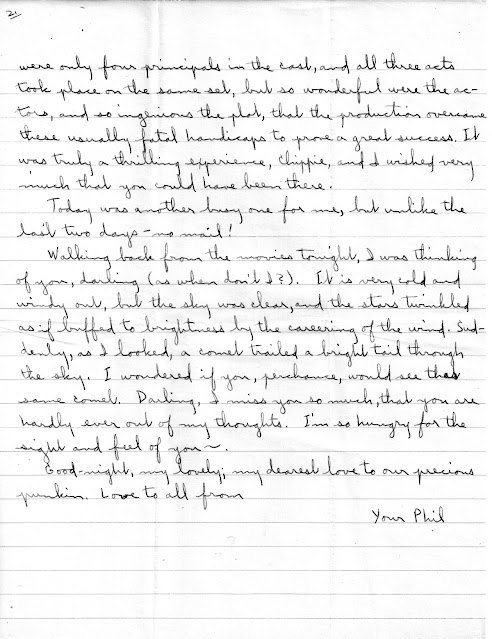 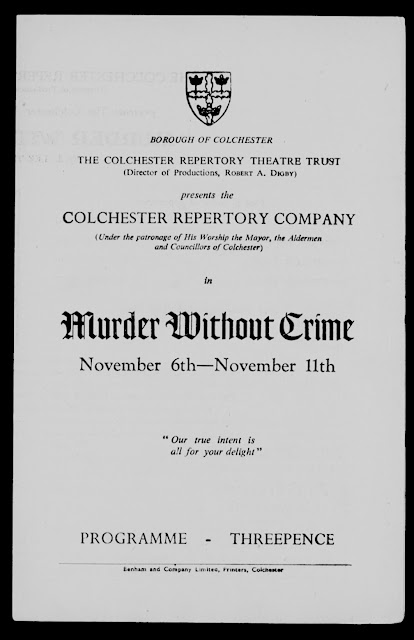 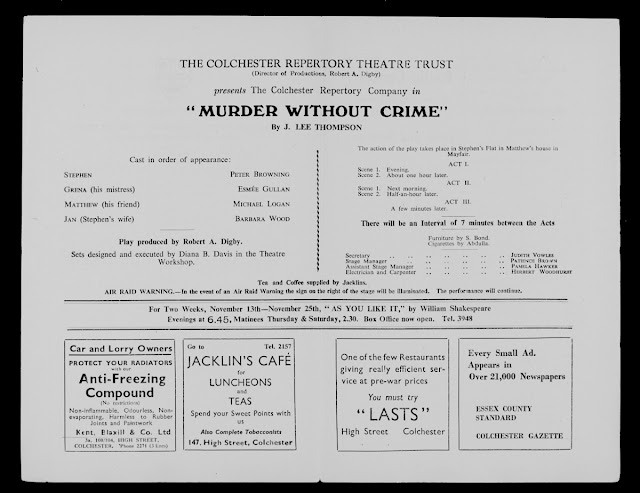 10 November 1944
My Own Darling,
Just returned from the base theater, where I saw a very entertaining film. It was "It Happened Tomorrow," with D. Powell, Linda Darnell and Jack Oakie. It's a sort of a fantasy - but interesting as well as amusing. Darnell is darkly beautiful. By a strange coincidence, you write about her in your V-mail of 31 Oct., received yesterday. You saw her in “Summer Storm,” remember? You seem to have worked up a strong dislike for George Sanders (not Saunders) in this one. Your choice of words in the paragraph describing your reactions to the picture amused me, Sweet. Some day I'm going to ask you what you meant when you described the character Sanders played as "weak sexually.” There isn't anything else in this letter that excites any comment.
I know you are wondering why I waited 'til today to answer the letter received yesterday, so I’ll hasten to explain: Last night, in company with twelve other fellows from the base, I went to the theater. The party was arranged by the Red Cross workers here on the base, and it proved entirely worth-while. One of our trucks took us into town, dropped us at the theater, and picked us up after the show and returned us to the base. The play, in three acts, was titled "Murder Without Crime;’ the players were the Colchester Repertory Company, and we all enjoyed it immensely. There were only four principals in the cast, and all three acts took place on the same set, but so wonderful were the actors, and so ingenious the plot, that the production overcame these usually fatal handicaps to prove a great success. It was truly a thrilling experience, Chippie, and I wished very much that you could have been there.
Today was another busy one for me, but unlike the last two days - no mail!
Walking back from the movies tonight, I was thinking of you, darling (as when don't I?). It is very cold and windy out, but the sky was clear, and the stars twinkled as if buffed to brightness by the careering of the wind. Suddenly, as I looked, a comet trailed a bright tail through the sky. I wondered if you, perchance, would see that same comet. Darling, I miss you so much, that you are hardly ever out of my thoughts. I'm so hungry for the sight and feel of you—.

Good-night, my lovely; my dearest love to our precious punkin. Love to all from

Cast in order of appearance:

The action of the play takes place in Stephen's Flat in Matthew's house in Mayfair.

There will be an Interval of 7 minutes between the Acts.

Furniture by S. Bond. Play produced by Robert A. Digby.
Cigarettes by Abdulla.
Sets designed and executed by Diana B. Davis in the Theatre

Secretary
JUDITH VOWLES
Stage Manager
PATIENCE BROWN
Assistant Stage Manager
PAMELA HAWKER
Electrician and Carpenter
HERBERT WOODHURST
Tea and Coffee supplied by Jacklins.
AIR RAID WARNING. - In the event of an Air Raid Warning the sign on the right of the stage will be illuminated. The performance will continue.