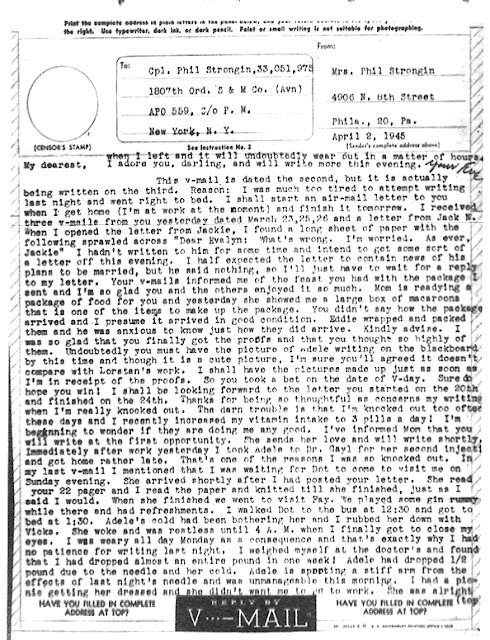 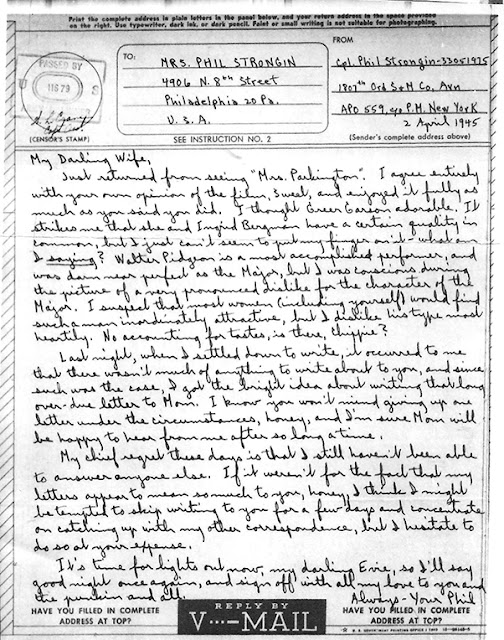 This v-mail is dated the second, but it is actually being written on the third. Reason: I was much too tired to attempt writing last night and went right to bed, I shall start an air-mail letter to you when I get home (I'm at work at the moment) and finish it tomorrow. I received three v-mails from you yesterday dated March 23, 25, 26 and a letter from Jack N. When I opened the letter from Jackie, I found a long sheet of paper with the following sprawled across "Dear Evalyn: What's wrong. I'm worried. As ever, Jackie." I hadn't written to him for some time and intend to get some sort of letter off this evening. I half expected the letter to contain news of his plans to be married, but he said nothing. So I'll just have to wait for a reply to my letter. Your v-mails informed me of the feast you had with the package I sent and I'm so glad you and the others enjoyed it so much. Mom is readying a package of food for you and yesterday she showed me a large box of macaroons that is one of the items to make up the package. You didn't say how the package arrived and I presume it arrived in good condition. Eddie wrapped and packed them and he was anxious to know just how they did arrive. Kindly advise. I was so glad that you finally got the proofs and that you thought so highly or them. Undoubtedly you must have the picture of Adele writing on the blackboard by this time and though it is a cute picture, I'm sure you'll agreed it doesn't compare with Lorstan's work. I shall have the pictures made up just as soon as I'm In receipt of the proofs. So you took a bet on the date of V-day. Sure do hope you win! I shall be looking forward to the letter you started on the 20th and finished on the 24th. Thanks for being so thoughtful as concerns my writing when I’m really knocked out. The darn trouble is that I'm knocked out too often these days and I recently increased my vitamin intake to 3 pills a day. I'm beginning to wonder if they are doing me any good. I've informed Mom that you will write at the first opportunity. She sends her love and will write shortly. Immediately after work yesterday I took Adele to Dr. Gayl for her second injection and got home rather late. That's one of the reasons I was so knocked out. In my last v-mail I mentioned that I was waiting for Dot to come to visit me on Sunday evening. She arrived shortly after I had posted your letter. She read your 22 pager and I read the paper and knitted till she finished, just as I said I would. When she finished we went to visit Fay. We played some gin rummy while there and had refreshments. I walked Dot to the bus at 12:30 and got to bed at 1:30. Adele's cold had been bothering her and I rubbed her down with Vicks. She woke and was restless until 4 A. M. when I finally got to close my eyes. I was weary all day Monday as a consequence and that's exactly why I had no patience for writing last night. I weighed myself at the doctor's and found that I had dropped almost an entire pound in one week! Adele had dropped 1/2 pound due to the needle and her cold. Adele is sporting a stiff arm from the effects of last night's needle and was unmanageable this morning. I had a picnic getting her dressed and she didn't want me to go work. She was alright when I left and it will undoubtedly wear out in a matter of hours. I adore you, darling, and will write more this evening.
Your Eve
2 April 1945
My Darling Wife,
Just returned from seeing “Mrs Parkington.” I agree entirely with your own opinion of the film, Sweet, and enjoyed it fully as much as you said you did. I thought Greer Garson adorable. It strikes me that she and Ingrid Bergman have a certain quality in common, but I just can’t seem to put my finger on it—what am I saying? Walter Pidgeon is a most accomplished performer, and was darn near perfect as the Major, but I was conscious during the picture of a very pronounced dislike for the character of the Major. I suspect that most women (including yourself) would find such a man inordinately attractive, but I dislike his type most heartily. No accounting for tastes, is there, Chippie?
Last night, when I settled down to write, it occurred to me that there wasn’t much of anything to write about to you, and since such was the case, I got the bright idea about writing that long over-due letter to Mom. I know you won’t mind giving up one letter under the circumstances, honey, and I’m sure Mom will be happy to hear from me after so long a time.
My chief regret these days is that I still haven’t been able to answer anyone else. If it weren’t for the fact that my letters appear to mean so much to you, honey, I think I might be tempted to skip writing to you for a few days and concentrate on catching up with my other correspondence, but I hesitate to do so at your expense.
It’s time for lights out now, my darling Evie, so I’ll say good night once again, and sign off with all my love to you and the punkin and all.
Always—
Your Phil
Posted by Marilyn at 6:26 PM