Post #661 - May 29, 1945 I May Be Here for At Least a Few Days Because I Told the Doc About My Long Suffering with Indigestion and A Letter from Jack Nerenberg 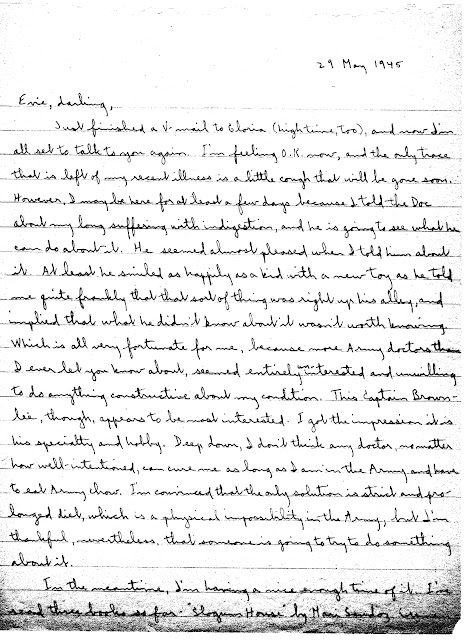 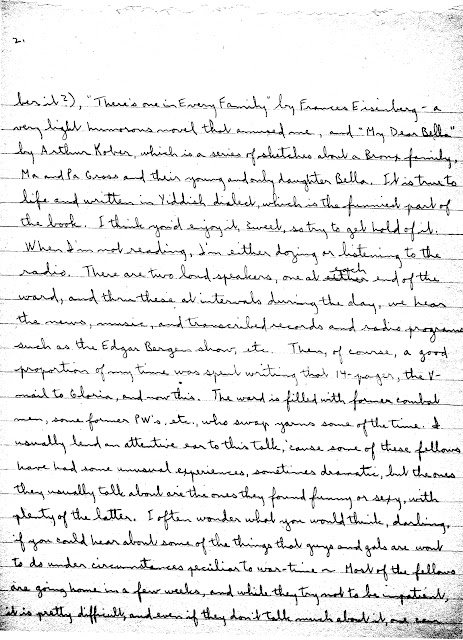 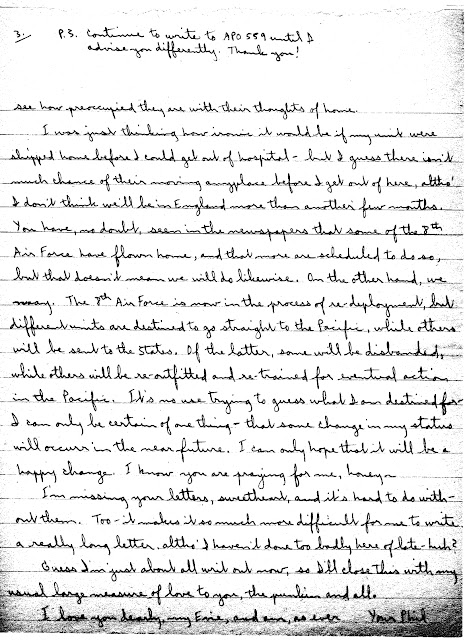 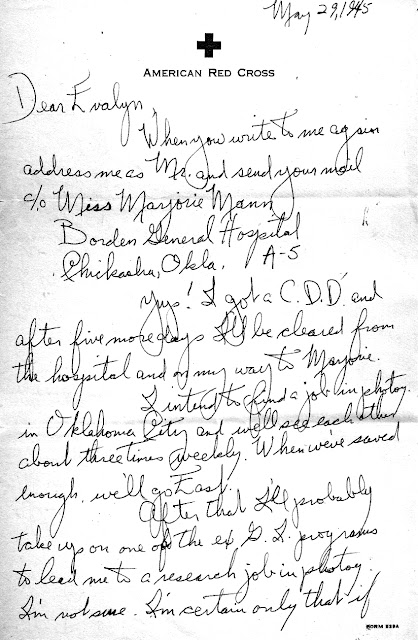 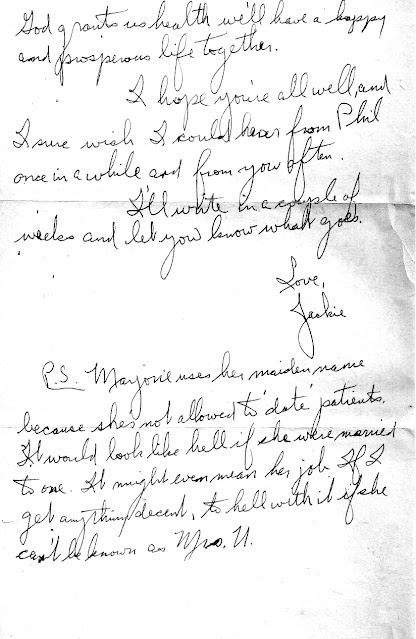 Just finished a V-mail to Gloria (high time, too), and now I'm all set to talk to you again. I'm feeling O.K. now, and the only trace that is left of my recent illness is a little cough that will be gone soon. However, I may be here for at least a few days because I told the Doc about my long suffering with indigestion, and he is going to see what he can do about it. He seemed almost pleased when I told him about. it. At least he smiled as happily as a kid with a new toy as he told me quite frankly that that sort of thing was right up his alley, and implied that what he didn't know about it wasn't worth knowing. Which is all very fortunate for me, because more Army doctors than you know about, seemed entirely uninterested and unwilling to do anything constructive about my condition. This Captain Brownlie, though, appears to be most interested. I got the impression it is his specialty and hobby. Deep down, I don't think any doctor, no matter how well-intentioned, can cure me as long as I am in the Army and have to eat Army chow. I'm convinced that the only solution is strict and prolonged diet, which is a physical impossibility in the Army, but I’m thankful, nevertheless, that someone is going to try to do something about it.

In the meantime, I'm having a nice enough time of it. I've read three books so far. "Slogum House” by Mari Sandoz (remember it?), "There's One in Every Family" by Frances Eisenberg - a very light humorous novel that amused me, and "My Dear Bella" by Arthur Kober, which is a series of sketches about a Bronx family, Ma and Pa Gross and their young and only daughter Bella. It is true to life and written in Yiddish dialect, which is the funniest part of the book. I think you'd enjoy it, Sweet, so try to get hold of it. When I'm not reading, I'm either dozing or listening to the radio. There are two loud speakers, one at each end of the ward, and thru these at intervals during the day, we hear the news, music, and transcribed records and radio programs such as the Edgar Bergen show, etc. Then, of course, a good proportion of my time was spent writing that 14-pager, the V- mail to Gloria, and now this. The ward is filled with former combat men, some former PW's, etc., who swap yarns some of the time. I usually lend an attentive ear to this talk, ’cause some of these fellows have had some unusual experiences, sometimes dramatic, but the ones they usually talk about are the ones they found funny or sexy, with plenty of the latter. I often wonder what you would think, darling, if you could hear about some of the things that guys and gals are wont to do under circumstances peculiar to war-time—Most of the fellows are going home in a few weeks, and while they try not to be impatient, it is pretty difficult, and even if they don't talk much about it, one can see how preoccupied they are with their thoughts of home.

I was just thinking how ironic it would be if my unit were shipped home before I could get out of hospital - but I guess there isn't much chance of their moving anyplace before I get out of here, altho' I don't think we'll be in England more than another few months. You have, no doubt, seen in the newspapers that some of the 8th Air Force have flown home, and that more are scheduled to do so, but that doesn't mean we will do likewise. On the other hand, we may. The 8th Air Force is now in the process of re-deployment, but different units are destined to go straight to the Pacific, while others will be sent to the states. Of the latter, some will be disbanded, while others will be re-outfitted and re-trained for eventual action in the Pacific. It's no use trying to guess what I am destined for - I can only be certain of one thing - that some change in my status will occur in the near future. I can only hope that it will be a happy change. I know you are praying for me, honey—

I'm missing your letters, sweetheart, and it's hard to do without them. Too - it makes it so much more difficult for me to write a really long letter, altho’ I haven't done too badly here of late - huh? Guess I'm just about all writ out now, so I'll close this with my usual large measure of love to you, the punkin and all.

I love you dearly, my Evie, and am, as ever

Your Phil
P.S. Continue to write to APO 559 until I advise you differently. Thank you!
May 29, 1945
Dear Evalyn,
When you write to me again address me as Mr. and send your mail c/o Miss Marjorie Mann, Borden General Hospital, Chickasha, Okla. A-5
Yup! I got a C.D.D. and after five more days I’ll be cleared from the hospital and on my way to Marjorie.
I intend to find a job in photog. in Oklahoma City and we’ll see each other about three times weekly. When we’ve saved enough, we’ll go East.
After that I’ll probably take up on one of the ex G.I. programs to lead me to a research job in photog. I’m not sure. I’m certain only that if God grants us health we’ll have a happy and prosperous life together.
I hope you’re all well, and I sure wish I could hear from Phil once in a while and from you often.
I’ll write in a couple of weeks and let you know what goes.
Love,
Jackie
P.S. Marjorie uses her maiden name because she’s not allowed to “date” patients. It would look like hell if she were married to one. It might even mean her job. If I get anything decent, to hell with it if she can’t be known as Mrs. N.
Posted by Marilyn at 11:35 AM