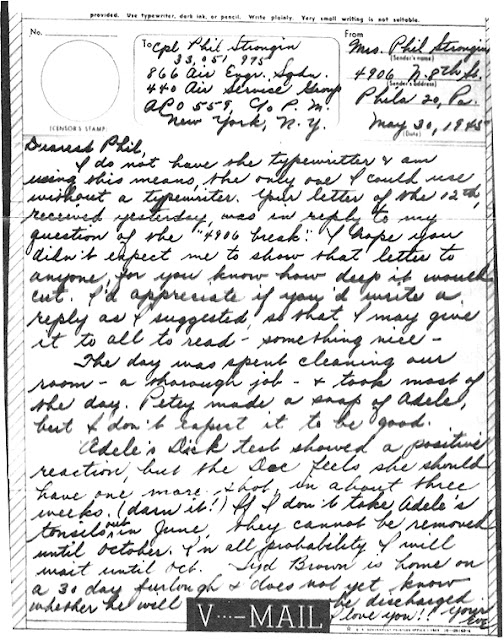 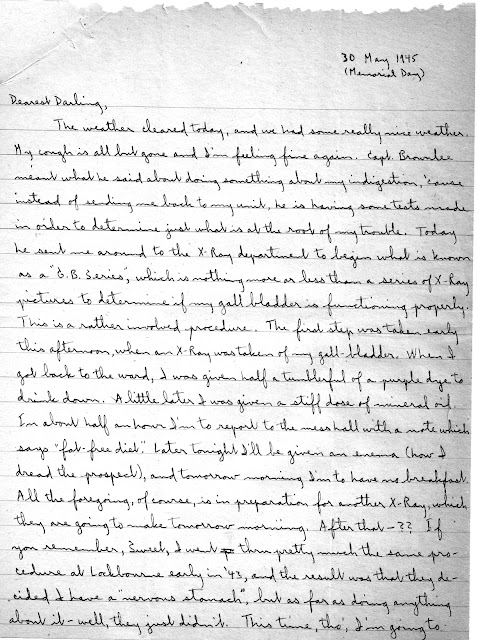 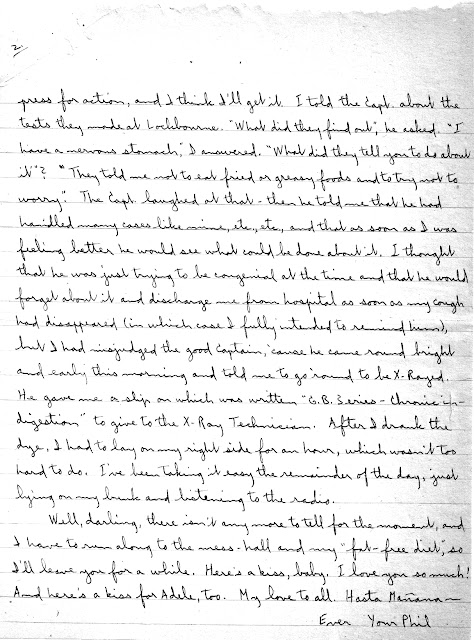 I do not have the typewritter & am using this means, the the only one I could use, without a typewriter. Your letter of the 12th, received yesterday, was in reply to my question of the “#4906 break." I hope you didn't expect me to show that letter to anyone, for you know how deep it would cut. I'd appreciate if you'd write a reply as I suggested, so that I may give it to all to read - something nice -
The day was spent cleaning our room - a thorough job - & took most of the day. Petey made a snap of Adele, but I don’t expect it to be good.
Adele's Dick test showed a positive reaction, but the Doc feels she should have one more shot, in about three weeks. (darn it!) If I don't take Adele's tonsils out in June, they cannot be removed until October. In all probability I will wait until Oct. Syd Brown is home on a 30 day furlough & does not yet know whether he will be discharged.

I love you!!
Your Eve

The weather cleared today, and we had some really nice weather. My cough is all but gone and I'm feeling fine again. Capt. Brownlee meant what he said about doing something about my indigestion, ’cause instead of sending me back to my unit, he is having some tests made in order to determine just what is at the root of my trouble. Today he sent me around to the X-Ray department to begin what is known as a “G.B. Series,” which is nothing more or less then a series of X-Ray pictures to determine if my gall bladder is functioning properly. This is a rather involved procedure. The first step was taken early this afternoon, when an X-Ray was taken of my gall-bladder. When I got back to the ward, I was given half a tumblerful of a purple dye to drink down. A little later I was given a stiff dose of mineral oil. In about half an hour I'm to report to the mess hall with a note which says "fat-free diet." Later tonight I'll be given an enema (how I dread the prospect), and tomorrow morning I'm to have no breakfast. All the foregoing, of course, is in preparation for another X-Ray, which they are going to make tomorrow morning. After that - ?? If you remember, Sweet, I went thru pretty much the same procedure at Lockbourne early in ’43, and the result was that they decided I have a “nervous stomach", but as far as doing anything about it - well, they just didn't. This time, tho’ I’m going to press for action, and I think I'll get it. I told the Capt. about the tests they made at Lockbourne. "What did they find out,” he asked. "I have a nervous stomach,” I answered. "What did they tell you to do about it"? "They told me not to eat fried or greasy foods and to try not to worry.” The Capt. laughed at that - then he told me that he had handled many cases like mine, etc, etc, and that as soon as I was feeling better he would see what could be done about it. I thought that he was just trying to be congenial at the time and that he would forget about it and discharge me from hospital as soon as my cough had disappeared (in which case I fully intended to remind him), but I had misjudged the good Captain, ’cause he came round bright and early this morning and told me to go round to be X-Rayed. He gave me a slip on which was written "G.B. Series - Chronic indigestion" to give to the X-Ray Technician. After I drank the dye, I had to lay on my right side for an hour, which wasn't too hard to do. I've been taking it easy the remainder of the day, just lying on my bunk and listening to the radio.

Well, darling, there isn't any more to tell for the moment, and I have to run along to the mess-hall and my "fat-free diet,” so I'll leave you for a while. Here's a kiss, baby. I love you so much! And here's a kiss for Adele, too. My love to all. Hasta Mañana

Ever
Your Phil
Posted by Marilyn at 12:40 PM