Post #663 - May 31, 1945 I've Become Very Hard Inside and Can Take Most Anything That Comes My Way and The Menial Work Around the Hospital Here is Done by German PW's 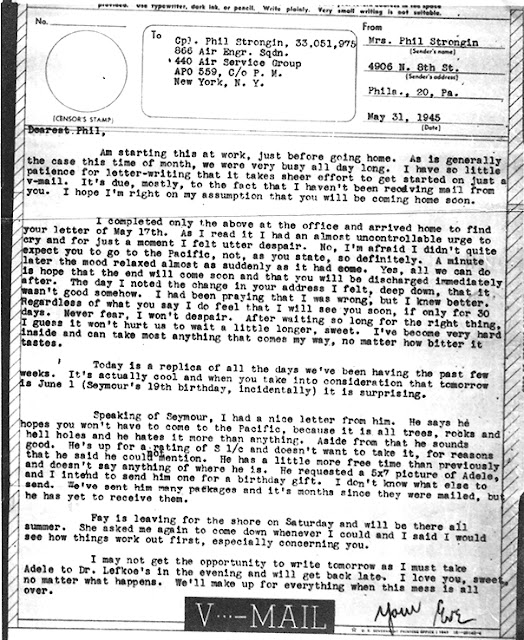 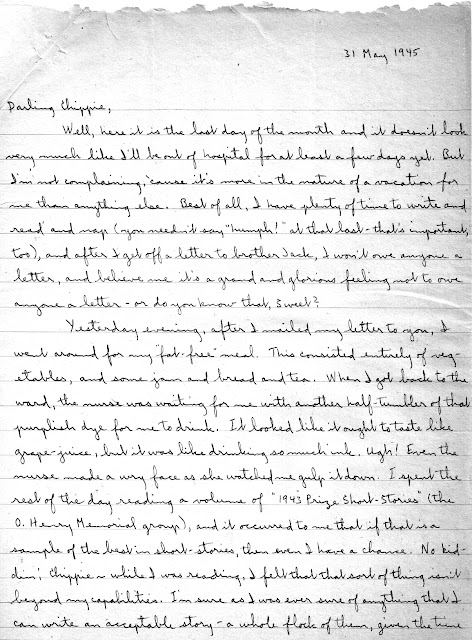 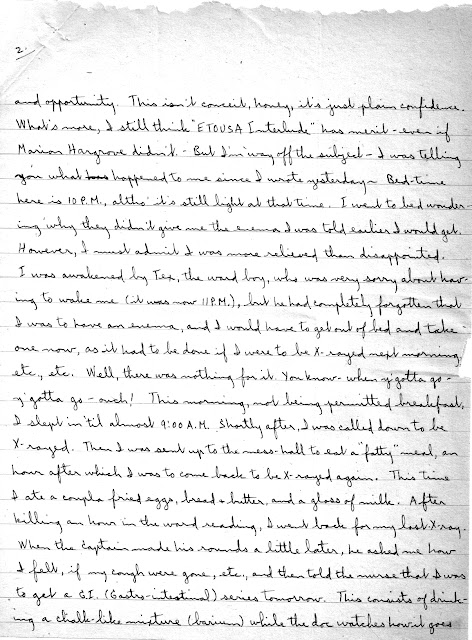 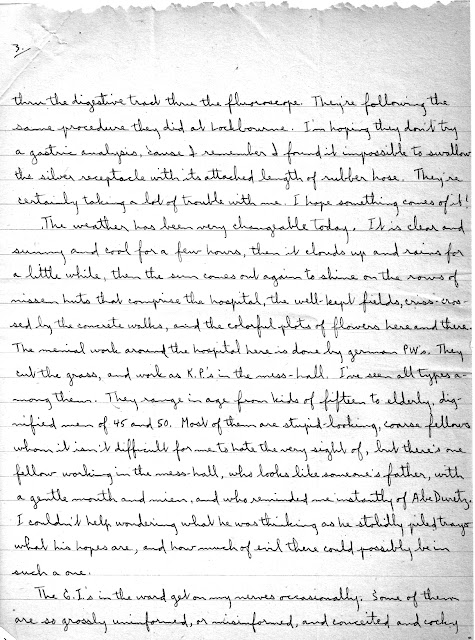 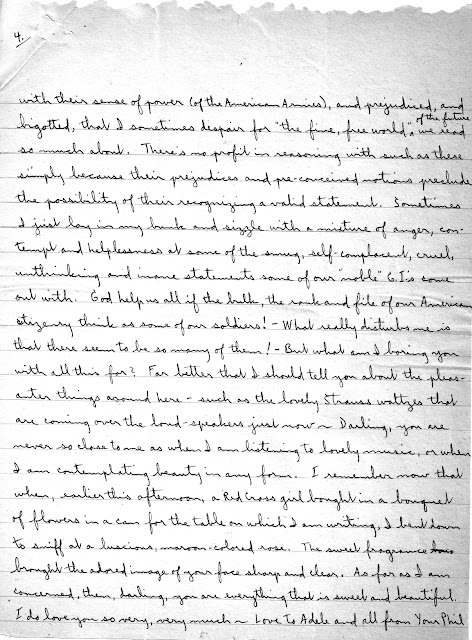 Am starting this at work, just before going home. As is generally the case this time of month, we were very busy all day long. I have so little patience for letter-writing that it takes sheer effort to get started on just a v-mail. It's due, mostly, to the fact that I haven't been receiving mail from you. I hope I'm right on my assumption that you will be coming home soon.

I completed only the above at the office and arrived home to find your letter of May 17th. As I read it I had an almost uncontrollable urge to cry and for just a moment I felt utter despair. No, I'm afraid I didn't quite expect you to go to the Pacific, not, as you state, so definitely. A minute later the mood relaxed almost as suddenly as it had come. Yes, all we can do is hope that the end will come soon and that you will be discharged immediately after. The day I noted the change in your address I felt, deep down, that it wasn't good somehow. I had been praying that I was wrong, but I knew better. Regardless of what you say I do feel that I will see you soon, if only for 30 days. Never fear, I won't despair. After waiting so long for the right thing, I guess it won't hurt us to wait a little longer, sweet. I've become very hard inside and can take most anything that comes my way, no matter how bitter it tastes.

Today is a replica of all the days we've been having the past few weeks. It's actually cool and when you take into consideration that tomorrow is June 1 (Seymour's 19th birthday, incidentally) it is surprising.

Speaking of Seymour, I had a nice letter from him. He says he hopes you won't have to come to the Pacific, because it is all trees, rocks and hell holes and he hates it more than anything. Aside from that he sounds good. He's up for a rating of S 1/c and doesn't want to take it, for reasons that he said he could not mention. He has a little more free time than previously and doesn't say anything of where he is. He requested a 5x7 picture of Adele, and I intend to send him one for a birthday gift. I don't know what else to send. We've sent him many packages and it's months since they were mailed, but he has yet to receive them.

Fay is leaving for the shore on Saturday and will be there all summer. She asked me again to come down whenever I could and I said I would see how things work out first, especially concerning you.

I may not get the opportunity to write tomorrow as I must take Adele to Dr. Lefkoe's in the evening and will get back late. I love you, sweet, no matter what happens. We'll make up for everything when this mess is all over.

Well, here it is the last day of the mouth and it doesn't look very much like I'll be out of hospital for at least a few days yet. But I'm not complaining, ’cause it's more in the nature of a vacation for me than anything else. Best of all, I have plenty of time to write and read and nap (you needn't say "humph!" at that last - that's important, too), and after I get off a letter to brother Jack, I won't owe anyone a letter, and believe me it's a grand and glorious feeling not to owe anyone a letter - or do you know that, sweet?

Yesterday evening, after I mailed my letter to you, I went around for my “fat-free" meal. This consisted entirely of vegetables, and some jam and bread and tea. When I got back to the ward, the nurse was waiting for me with another half-tumbler of that purplish dye for me to drink. It looked like it ought to taste like grape-juice, but it was like drinking so much ink. Ugh! Even the nurse made a wry face as she watched me gulp it down. I spent the rest of the day reading a volume of "1943 Prize Short-Stories" (the O. Henry Memorial group), and it occurred to me that if that is a sample of the best in short-stories, then even I have a chance. No kiddin’,  Chippie ~ while I was reading, I felt that that sort of thing isn't beyond my capabilities. I'm sure as I was ever sure of anything that I can write an acceptable story - a whole flock of them, given the time and opportunity. This isn't conceit, honey, it's just plain confidence. What's more, I still think "ETOUSA Interlude" has merit - even if Marion Hargrove didn't. - But I’m way off the subject - I was telling you what has happened to me since I wrote yesterday ~ Bed-time here is 10 P.M., altho' it's still light at that time. I went to bed wondering why they didn't give me the enema I was told earlier I would get. However, I must admit I was more relieved than disappointed. I was awakened by Tex, the ward boy, who was very sorry about having to wake me (it was now 11 P.M.), but he had completely forgotten that I was to have an enema, and I would have to get out of bed and take one now, as it had to be done if I were to be X-rayed next morning, etc., etc. Well, there was nothing for it. You know - when y’gotta go - y’gotta go - ouch! This morning, not being permitted breakfast, I slept in ’til almost 9:00 A.M. Shortly after, I was called down to be X-rayed. Then I was sent up to the mess-hall to eat a "fatty" meal, an hour after which I was to come back to be X-rayed again. This time I ate a coupla fried eggs, bread & butter, and a glass of milk. After killing an hour in the ward reading, I went back for my last X-ray. When the captain made his rounds a little later, he asked me how I felt, if my cough gone, etc., and then told the nurse that I was to get a G.I. (Gastro-intestinal) series tomorrow. This consists of drinking a chalk-like mixture (barium) while the doc watches how it goes thru the digestive track thru the fluoroscope. They're following the same procedure they did at Lockbourne. I'm hoping they don't try a gastric analysis, ’cause I remember I found it impossible to swallow the silver receptacle with its attached length of rubber hose. They're certainly taking a lot of trouble with me. I hope something comes of it!
The weather has been very changeable today. It is clear and sunny and cool for a few hours, then it clouds up and rains for a little while, then the sun comes out again to shine on the rows of nissen huts that comprise the hospital, the well-kept fields, criss-crossed by the concrete walks, and the colorful plots of flowers here and there. The menial work around the hospital here is done by german PW's. They cut the grass, and work as K.P.'s in the mess-hall. I've seen all types among them. They range in age from kids of fifteen to elderly, dignified men of 45 and 50. Most of them are stupid-looking, coarse fellows whom it isn't difficult for me to hate the very sight of, but there's fellow working in the mess-hall, who looks like someone's father, with a gentle mouth and mien, and who reminded me instantly of Abe Duretz. I couldn't help wondering what he was thinking as he stolidly piled trays what his hopes are, and how much of evil there could possibly be in such a one.

The G.I.'s in the ward get on my nerves occasionally. Some of them are so grossly uninformed, or misinformed, and conceited and cocky with their sense of power (of the American Armies), and prejudiced, and bigotted, that I sometimes despair for "the fine, free world" of the future, we read so much about. There's no profit in reasoning with such as these simply because their prejudices and pre-conceived notions preclude the possibility of their recognizing a valid statement. Sometimes I just lay in my bunk and sizzle with a mixture of anger, contempt and helplessness at some of the smug, self-complacent, cruel, unthinking and inane statements some of our “noble" G.I.'s come out with. God help us all if the bulk, the rank and file of our America citizenry think as some of our soldiers! - What really disturbs me is that there seem to be so many of them! - But what am I boring you with all this for? Far better that I should tell you about the pleasanter things around here - such as the lovely Strauss waltzes that are coming over the loud-speakers just now ~
Darling, you are never so close to me as when I am listening to lovely music, or when contemplating beauty in any form. I remember now that when, earlier this afternoon, a Red Cross girl bought in a bouquet of flowers in a can for the table on which I am writing, I bent down to sniff at a luscious, maroon-colored rose. The sweet fragrance brought the adored image of your face sharp and clear. As far as I am concerned, then, darling, you are everything that is sweet and beautiful. I do love you so very, very much ~ Love to Adele and all from
Your Phil
Posted by Marilyn at 6:50 AM